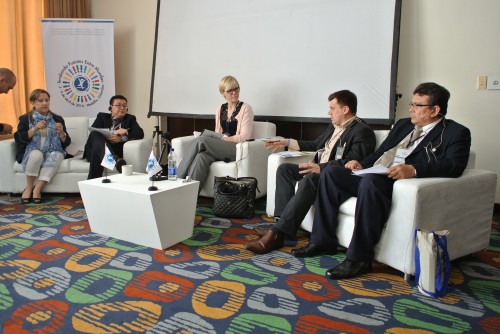 “Bridges between Worlds”, a global conference looking at assisting landmine and other explosive remnants of war victims and survivors within the context of disability rights, was recently held in Medellin, Colombia on April 3 and 4, 2014.

Nerina Cevra, AOAV’s Victims’ Rights expert, was participant in the conference.  She led a session on Transitional Justice and Victim Assistance, where the connections between these two frameworks, especially in countries coming out of conflict, was explored.  Of focus was the issue on which countries are dealing with the legacy of landmines and other weapons’ contamination.

The two-day conference was opened with a high-level panel welcoming the participants and highlighting the important role of efforts at assisting victims and survivors of landmines. The head of Office of High Commissioner for Human Rights in Colombia, Todd Howland, spoke of the conference as an important step forward in the recognition of victims and survivors of landmines as rights-holders and not just objects of charity and assistance.

This theme of rights recognition permeated the two days of the conference.  The conference was held in a “talk-show” style, where participants were encouraged to engage in conversations among each other and with the audience, with the aim to make sure that it was as interactive and as functional as possible.

On the first day of the conference, concurrent sessions were held to address some of the specific themes.  These were all around the idea of building bridges between different frameworks. Panelists discussed the importance in ensuring assistance to victims was  priority – needed to be included in affected states’ national action plans on disability.  They also talked about how to adequately consider gender, age and diversity in the process of assisting victims, and about what can be done to remove the barriers to equal participation of persons with disabilities, including landmine survivors, in society.

The day finished with a plenary discussion of disability-inclusive development, talking abut how such an idea can contribute to the implementation of victim assistance obligations under the Mine Ban Treaty. Vladimir Cuk, Executive Director of the International Disability Alliance, spoke about the post-2015 Millennium Development Goals (MDGs) process and the importance of ensuring such goals are disability-inclusive. He discussed efforts by the disability rights community, and called on survivors and their organizations to join the efforts of the broader disability community to ensure that there is reference to disability in the post-2015 MDGs.

He explained that the MDGs will form tangible targets for the international community and states to achieve, and that they will inform development efforts for years to come. Once disability is included in the goals, he explained, survivors’ organizations and disabled persons’ organizations can, on national levels, work with their governments to interpret what exactly such inclusion means for their country in question.

On the second day, the conference continued with thematic discussions. The Plenary session focused on enhancing the bridge between victim assistance and approaches to health care and psychosocial support.  Various approaches were highlighted, in particular, peer-to-peer support and community-based rehabilitation, as being both a cost-effective and an inclusive way to assist in trauma recovery. During the discussions, comments made highlighted the lack of concerted efforts and consideration of gun violence victims and survivors in the provision of funding for recovery and rehabilitation services.

Despite this, it was mentioned that “on the ground”, where services are provided, there was no discrimination in provision of actual services to all victims and survivors of armed violence, including gun violence survivors. The International Campaign to Ban Landmines (ICBL) highlighted that landmine victim assistance is often a way in for the disability rights for all victims of armed violence in post-conflict countries to be covered.

On the second day, the afternoon sessions focused on ways and means to assist and guarantee rights to victims and survivors of landmines. Three sessions were held, addressing issues of transitional justice, survivor networks and regional approaches to implementation of victim assistance.

The Action on Armed Violence-led session on transitional justice focused on explaining what the issue was and how it was relevant towards the implementation of victim assistance obligations. As part of this discussion, global experts on transitional justice and reparation spoke about the importance of these measures and mechanisms in acknowledging the victimization caused by landmines.  They also help to ensure that reparations and assistance is provided to all victims, including landmine and other explosive remnants of war survivors.

Representatives from Colombian ‘Victims’ Unit’ and El Salvador’s ‘Fund for the Disabled Due To The Conflict’ also spoke.  They talked of their own country’s experience in transitional justice and the role that victims and survivors play in its implementation.

The conference was closed with a session on building stronger bridges between different worlds. The theme that permeated this discussion was one of connecting, collaborating and representing as being essential elements of effective assistance to all victims of armed violence. AOAV used this opportunity to call on all participants to ensure that victim assistance discussions within disarmament and arms control frameworks is strengthened and continues to be at the forefront of progressive, rights-based policies.  In so doing it will help seek recognition of rights to all victims of armed violence.

Victim assistance provisions, besides ensuring concrete support to victims, also allows for discussions on disability rights, victims’ rights, and broader human rights to take part within forums that otherwise would not be addressed.

The closing session included remarks from the Vice-President of Colombia, who spoke of the need to continue strong focus on rights of victims of conflict, and spoke about the peace negotiations going on in Cuba between the government and “illegal armed groups”. He said that the conference itself was responsible for the negotiating parties’ agreeing to discuss the issue of landmines as part of the negotiations. He also called on the United States to adopt the Mine Ban Treaty, stating that they cannot call themselves champions of human rights while not banning these indiscriminate weapons.