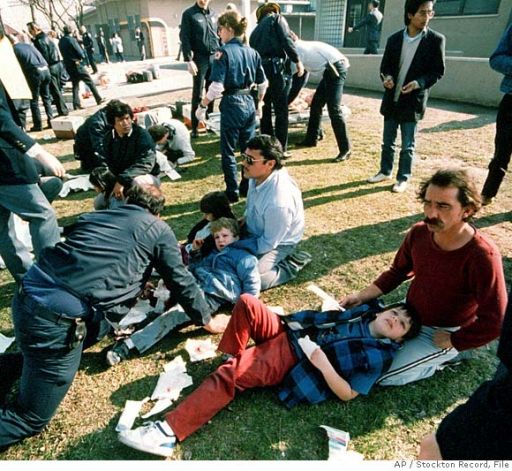 Number killed: 6 (5 children, plus the perpetrator)

Number injured: 30 (29 children and one teacher)

Perpetrator: Patrick Purdy, 26[1]. He was known to police before the incident and had a long criminal record, including a weapons conviction. Committed suicide at the scene.

Weapons: Two pistols and an AK-47. 106 shots fired in total, including between 50 and 60 from the AK-47. He was able to buy the AK-47 in a gun shop in Oregon due to minimal requirements for background checks. He bought his Taurus 9mm pistol at a pawn shop in California. 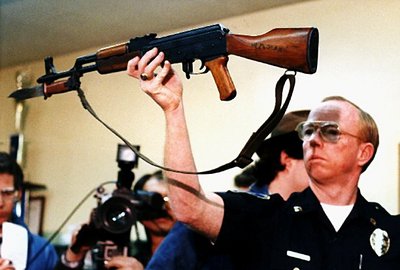 At around lunchtime on the day of the shooting, the perpetrator filled his car with fireworks and drove to his former elementary school, where he set the vehicle alight with a Molotov cocktail. He then entered the playground, opening fire on the children who were playing. Witnesses reported that he ducked several times behind a mobile classroom to reload the assault rifle. In under three minutes, he killed five children aged between six and nine years old, and wounded 29 others, plus a teacher. He then turned his 9mm pistol on himself.

Purdy was able to purchase the assault rifle by using a false name and lying on the required Federal form about his previous convictions. The law required no further checks of the answers on the form, only that a copy was kept by the seller. The seller was required to notify the Bureau of Alcohol, Tobacco and Firearms of the transaction, including details of the firearm, but no information about the purchaser was necessary.

At the time, only three states required a waiting period between multiple rifle or shotgun purchases, and only 20 states required a background check for handgun purchases. Oregon did not require either. In California, an attempt to ban military-style assault weapons had failed in 1988 due to strong opposition from the gun lobby.

The right to bear arms is guaranteed under US federal law.

The media asked questions about how Purdy had been able to purchase the guns with such apparent ease. Particular emphasis was placed on the fact that he had a long criminal record, including a weapons convictions. While gun control advocates called for a Federal ban on military-style semi-automatic rifles, the gun lobby argued that it was impossible to distinguish between so-called ‘assault weapons’ and normal rifles.

The tragedy led to California’s enactment of the Roberti-Roos Assault Weapons Control Act (AWCA) in 1989. The law classified over fifty models of semi-automatic firearms as assault weapons and banned magazines with a capacity of over ten rounds. The Act included a grandfather clause that permitted newly classified firearms and ammunition to be held lawfully, if they were registered with the California Department of Justice. The Act also banned various types of weapon by their characteristics, such as semi-automatic rifles with fixed magazines capable of accepting more than ten rounds.

[1] Sometimes reported as aged 24, due to confusion resulting from his having several aliases.