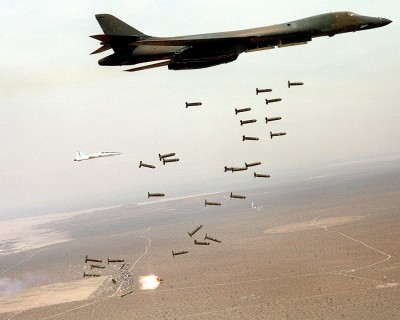 Significance: Example of extensive cluster bomb use. Laos is the most bombed country in the world per capita. Unexploded ordnance continues to kill and injure people today.

Impact: Between 1964 and 2011 mines and explosive remnants of war caused over 50,000 casualties in Laos. The use of cluster bombs has additionally had a huge economic impact, as people are unable to safely farm land.

Weapons: Cluster munitions from B-52 bombs.

Cluster bombs, although now illegal under the Convention on Cluster Munitions, were used widely in South East Asia throughout the 1960s and 1970s, and continued to be used until the adoption of the Convention. There are claims that they are still used in some conflicts today, but their devastating effects were, and continue to be, most prominently seen in countries such as Cambodia, Vietnam and Laos. More recently, they have been used in countries including Yugoslavia, Afghanistan, Iraq and Lebanon.

Cluster bomb use in Laos has resulted in the country being the most bombed in the world per capita. Between 1964 and 1973, Laos was hit on average every eight minutes by a B-52 bomb-load. Of the 260 million ‘bomblets’ which were dropped by US forces, more ordnance than was dropped by the US during the whole of WWII, 80 million failed to explode.

While deaths and injuries were caused during the initial dropping of cluster munitions over Laos, civilians continue to fall victim to these weapons. Unexploded ordnance continues to kill and injure ordinary people in Laos, and left a reported 37% of agricultural ground unsafe. An estimated 80% of people in affected areas in Laos are currently using land which is likely to be contaminated with explosives. Of those killed and injured by unexploded ordnance, up to 50% are children. Unexploded cluster munitions can look like toys and children often pick up explosive material without realising the danger. Men and boys make up the majority of casualties in Laos.

The use of cluster munitions have a huge economic impact on affected communities. In Laos, many people farm the land. Huge areas of land were made unsafe by cluster munitions, stifling development in the country.

While mine clearance groups are steadily clearing the land, and providing mine risk education, children, women and men continue to become casualties of unexploded cluster munitions. It is estimated that 20,000 people have been killed or injured post-conflict in Laos. The number of casualties per year is slowly decreasing, but people in Laos and other countries heavily bombed by cluster munitions, live with the constant knowledge that they could be killed or injured by cluster munitions which were dropped over 40 years ago.

A similar situation is seen in countries such as Cambodia and Vietnam, where unexploded cluster munitions continue to affect the local population in a way similar to that seen in Laos.

In 2008 an historic treaty, the Convention on Cluster Munitions, was signed. It entered into force in August 2010, and prohibits the use, transfer and stockpile of cluster bombs. The adoption of the treaty recognises the wide area impacts of cluster munitions, their inability to distinguish between civilians and combatants, and their long lasting impacts. The treaty has helped to hugely limit the use of these unacceptable weapons, however they continue to be used in contemporary conflicts, such as in Syria and South Sudan.