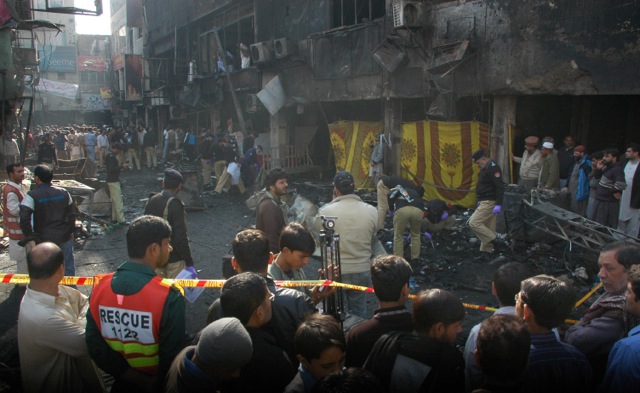 Aftermath of the 2009 bombing of the Moon Market in Lahore, Pakistan (Murtaza Ali)

At least 22 people have been killed by yet another indiscriminate bomb attack in Pakistan, this time in a crowded market in Islamabad. The blast, occurring on Wednesday 9th April, also wounded over 100 others. The bombing occurred at eight o’clock in the morning, one of the busiest times for the fruit and vegetable market in the Sabzi Mandi area of the city. Police have said that around five kilograms of explosives were hidden behind a crate of fruit and may have been detonated remotely.

Wednesday’s attack is part of a grim and underreported pattern of bombs being detonated in crowded markets, clearly targeting civilians.

Worldwide, the use of bombs in marketplaces is becoming an all too regular occurrence. AOAV has recorded 32 market bombings already in 2014.

These attacks deserve special mention as the data repeatedly shows that attacks in markets cause incredibly high  numbers of civilian casualties. In 2013 AOAV recorded 112 IED attacks in markets, killing and injuring at least 3,170 people globally – 98% of whom were civilians.

Like all explosive weapons, IEDs affect an area by projecting blast and fragmentation around a point of detonation. When they are deployed in populated areas like markets, civilians inevitably make up the majority of casualties.

Direct casualties are only one part of the harm these attacks cause. Many more people will be affected economically either through losing loved ones or through the destruction of their businesses.

Instead, a spokesman for the separatist group the United Baluch Army has claimed responsibility. The same group also claimed to be behind a bombing of a train on Tuesday that killed 14 people and injured 40 more. Pakistan’s Interior Ministry denied the claim.

Despite the fact that the Pakistani Taliban is currently in peace talks with the government, bombings across the country have continued. In the first three months of this year AOAV have recorded 40 IED attacks in Pakistan. These have killed and injured at least 700 people.