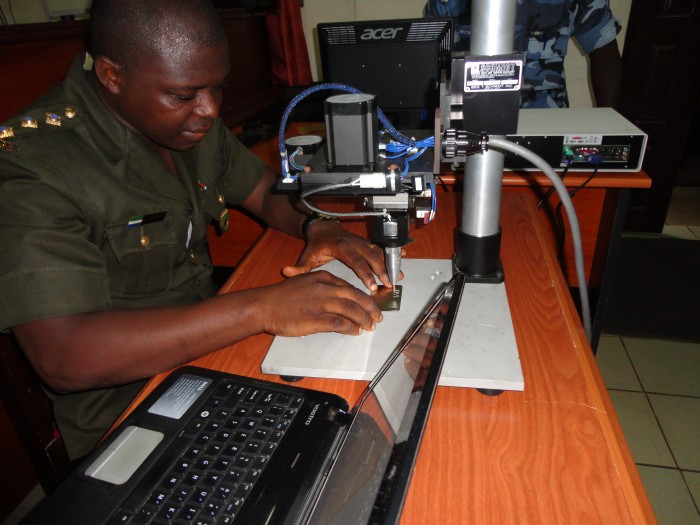 Today is day four of the BMS5 of the Programme of Action for Small Arms and Light Weapons. States are scheduled to continue discussing several points on the agenda, including stockpile management and the implementation of the international tracing instrument. AOAV tackles weapons proliferation in Sierra Leone by helping the Government improve stockpile management, supporting the launch of a national weapons marking and tracing programme and working directly with those producing weapons illicitly to pursue alternative livelihoods.

Following Sierra Leone’s ratification of the ECOWAS Convention on Small Arms and Light Weapons, Their Ammunition and Other Related Materials, the Sierra Leone National Commission on Small Arms (SLeNCSA) has been responsible for ensuring effective and proper coordination of all small arms control interventions.  Despite various arms collection programmes since the end of the conflict in 2002, it is believed that a significant number of firearms remain in circulation, which undermine human security and development in Sierra Leone and the wider region. The 2012 Arms and Ammunition Act aims to reduce and control the spread of SALW in Sierra Leone and throughout the region.

The improper storage of stockpiled arms and ammunition poses significant and unnecessary humanitarian, financial and security risks.  An accidental explosion can destroy lives and communities, and the financial implications to clear remaining debris, redevelop infrastructure, and support injured survivors can be just as devastating. Further, improper stockpile management creates the potential for thefts and leakages of weapons and ammunition, fuelling the illicit supply of weapons regionally and contributing to risk factors of armed violence. In Sierra Leone, AOAV conducts technical assessments of government stockpiles in Freetown, evaluates the capacity and resources held by the Government to effectively manage and store its weapons and ammunition, and provides recommendations to improve the safety and security of these stockpiles and nearby communities. 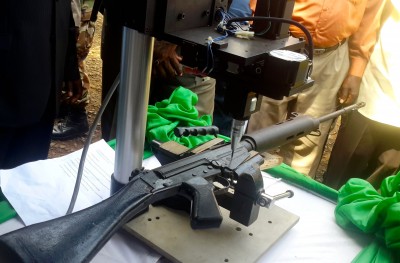 The Sierra Leone National Commission on Small Arms launches its weapons marking and computerisation programme, with support from AOAV.

AOAV also supports SLeNCSA to implement the Arms and Ammunition Act through its weapons marking and computerisation programme. AOAV worked with SLeNCSA to design a nationwide registration and licensing system; the follow-up marking and tracing campaign will enable SLeNCSA to implement the system with all state and civilian weapons. This programme aims to mark all state and civilian owned weapons with identifying registration codes, which will aid law enforcement agencies investigating gun related incidents. It will also ensure that civilians who produce or purchase weapons are able to do so in compliance with the law.

In 2013, AOAV provided two marking machines to the Government of Sierra Leone and sponsored one representative from the armed forces and one representative from the national police to travel to the United States to receive training in their operation.  On their return, these officers trained ten additional personnel in the use of the machines in preparation for the national marking programme.

In addition to supporting State-led weapons management projects, AOAV aims to reduce the number of arms in circulation by working with illicit arms manufacturers in Sierra Leone to develop alternative, safer livelihoods.

Unlicensed and unregistered artisan blacksmiths have a significant role in manufacturing illicit SALW for sale in Sierra Leone and for trade across borders in Guinea and Liberia. Made with heavy, cast iron barrels, aluminium firing mechanisms and rough wooden handles, these weapons are as effective as many conventional firearms, totally untraceable, and their numbers are practically incalculable. The supply, demand, and regional trafficking of illicit arms are contributing factors to armed violence and insecurity throughout the region, and have a detrimental impact on social and economic development.

AOAV is also working with many of these local artisans and blacksmiths to practically reduce the production of SALW. By conducting a labour market analysis and technical skills assessment, feasible livelihoods options have been identified that will allow blacksmiths to use their existing skill set to produce practical, marketable, and non-lethal goods. Tailored support through life coaching, communication and information sharing, and skills training is being provided by AOAV to ensure a smooth and sustainable transition into formal employment and more productive economic and social contribution to local and regional communities.