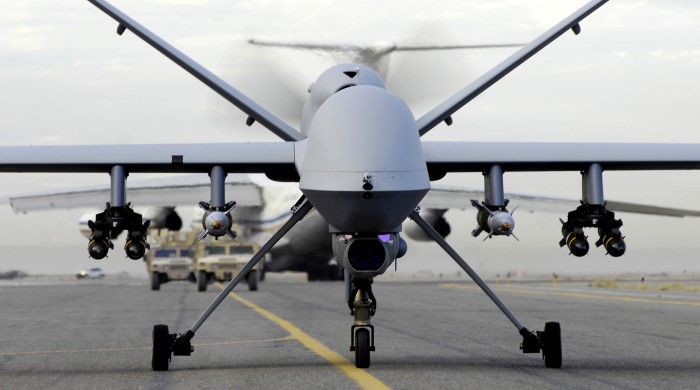 A fully armed MQ-9 Reaper drone taxis down a runway in Afghanistan.

In a report released on 25 March by the Defence Select Committee, MPs call upon the British government to increase transparency in their use of armed drones, particularly in regard to “safeguards and limitations the UK Government has in place for the sharing of intelligence”.

The Royal Air Force currently operates 10 armed Reaper drones in Afghanistan, along with hundreds of unarmed surveillance aircraft such as the Desert Hawk III and the Black Hornet. Concerns have been raised over the possibility of intelligence sharing between UK and US forces enabled by these drones, possibly supporting the American targeted killing programmes in Pakistan, Yemen and Somalia.

UN Special Rapporteur on Human Rights and Counterterrorism Ben Emmerson suggested that UK complicity in US drone strikes is “inevitable” due to the closeness of UK and US intelligence relationships.

The Committee’s report also highlights inconsistent statements regarding the possibility of a “combined Reaper fleet” in which UK drones would be operated by US pilots and vice versa. Earlier this year, the Parliamentary Under-Secretary of State and Minister for Defence Personnel, Welfare and Veterans, Anna Soubry MP, stated that UK Reaper drones have always been operated exclusively by UK pilots, while Secretary of State for Defence Rt Hon Philip Hammond MP indicated the opposite.

Referring to operations in Afghanistan, Hammond said: “UK and US aircraft fly ISAF mission tasks and they may be piloted by UK or US pilots. However, UK pilots always operate to UK rules of engagement. The rules of engagement for remotely piloted aircraft are exactly the same as those for our Tornado aircraft and those that will apply to our Apache rotary-wing aircraft when they are in action.”

“Hammond’s statement leaves a significant loophole,” said Jacob Parakilas, AOAV’s Head of Weapons. “While British pilots might always operate according to UK rules of engagement, the nature of a drone means that an American pilot could be swapped in for a specific task which violates those rules during a flight. The careful way the statement is worded suggests that the MoD is at the very least leaving this possibility open.”

MPs also recommend that the MoD should publish details about the incident and lessons learned following a drone strike that has resulted in civilian casualties.

“We consider it important that the MoD is as transparent as it can be about remotely piloted air system operations in order to build public confidence about their use and to debunk myths and counter misinformation,” the report states. In addition to gaining the public trust, this would also ensure that rules of engagements are applied appropriately and followed consistently.

These calls for more openness back recent recommendations by Special Rapporteur Emmerson, who requested that as soon as reliable source indicates that there “have been, or appear to have been, civilian casualties that were not anticipated when the attack was planned, the State responsible is under an obligation to conduct a prompt, independent and impartial fact-finding inquiry and to provide a detailed public explanation of the results.”

According to the Defence Select Committee’s report, the MoD is currently only aware of one incident that resulted in civilian deaths: in an attack on two trucks in March 2011, four Afghan civilians were reportedly killed alongside two insurgents. However, a subsequent ISAF investigation concluded that the crew’s actions had been in accordance with procedures and rules of engagement.

“There are a number of really significant unanswered questions about drone strikes,” said AOAV’s Parakilas. “Clarifying the questions about US-UK sharing of drones and pledging to gather and release more data about civilian casualties would be a good start.”