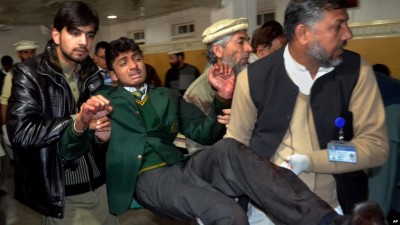 An injured student is helped after the 16 December attack in Peshawar.

Tuesday 16 December saw one of the worst attacks of recent times in Peshawar, Pakistan. 145 were killed when Taliban gunmen, wearing vests packed with explosives, stormed a school. 132 of those killed were children. The gunmen went from room to room, opening fire on classrooms full of children, injuring a further 100 civilians. The school was targeted specifically because it is run by the army, and the attack was reported to be a response to military operations in Pakistan. Most of the students who were killed were children of military personnel.

This incident reflects a horrifying pattern of children and schools being targeted intentionally. Children are repeatedly being brutally killed in similar attacks in different parts of the world. On the same day as the Peshawar attack, a car bomb exploded beside a rebel checkpoint in Yemen, killing 25 people including 15 children who were in a school bus driving past. On 10 November of this year, a suicide bomb killed 48 students and injured 79 in a school in Northern Nigeria. A morgue attendant at the hospital said that the victims all appeared to be between 11 and 20 years old. The attack was perpetrated by Boko Haram, an islamic insurgent group which opposes education for girls, and was responsible for the kidnapping of nearly 300 schoolgirls in April.

Attacks targeting schools, their students and staff, represent more than a series of inhuman killings and a generalised threat to their safety. They have an unquantifiable impact on education as a whole, and on the future of children and their community as a whole. “Apart from terrorising and traumatising people, burning down schools is a weapon of economic war, destroying the chance of self-improvement,” says Sean Coughlan, BBC education correspondent. The impact on education takes different forms, from the reduction in the supply of teachers, to the demolition of facilities and the psychological scars it creates. Often the incentive to attend school is completely destroyed, both due to the difficulties in accessing facilities, and the fear of future attacks.

According to a recent Save the Children report, almost 50 million children in conflict-affected countries do not attend school. 28.5 million of these are primary-age children and more than half are girls. Those children living in conflict-affected countries do not just face death and injury, but the impact on their education also denies them the opportunity to have a better future. In addition, if schools become an unsafe environment, consistently threatened to be used by parties to a conflict as a space for military gain, it becomes increasingly difficult to provide good quality education. Schools should be somewhere where children feel protected, not fearful.

The Lucens guidelines were drafted with the aim of preventing schools and universities being used by parties to a conflict as a way to support their war efforts. The guidelines emphasise the fact that international humanitarian law recognises the importance of the provision of education services to children during armed conflict, as well as the need to give them the necessary protection allowing continued access to those services. They also state that educational facilities are civilian objects and should not be targeted under any circumstance unless they become military objectives.

When a twin bomb attack on a school in Homs, Syria killed at least 30 children out of 39 civilian casualties, Leila Zerrougui, UN Special Representative for Children and Armed Conflict, stated that the targeting of schools and their students is a grave violation of international humanitarian law. “Attacks on schools and hospitals have become a feature of the Syrian conflict and deprive millions of children of their right to education and health,” she said; “even in times of war, schools and hospitals must remain safe places for learning and healing.”

Children and schools should never be directly targeted. Violent attacks on them represent a serious assault not only to their physical safety, but also on their opportunities for development and advancement. Schools must remain safe learning environments that children can attend with complete confidence for their protection. More efforts should be made to ensure those institutions are not repeatedly intentionally targeted by parties in conflict, including efforts to comply with the Lucens guidelines. AOAV condemns the attack in Peshawar and all other attacks which target children and schools.