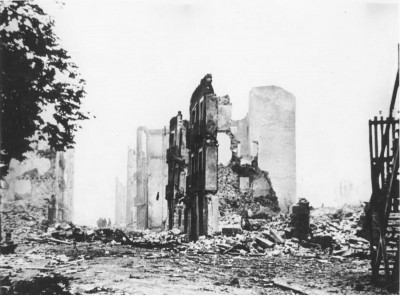 Guernica was almost completely destroyed by the aerial bombardment

Significance:  One of the first cases of a government bombing its own civilian population.

Who: The German Luftwaffe ‘Condor Legion’ and the Italian Fascist Aviazione Legionaria, in alliance with Nationalist Spanish forces

Impact: As with many of the attacks, the bombing of Guernica was highly controversial. The death toll remains disputed. The Basque authorities claim that 1,650 people were killed and 889 wounded. Lower contemporary estimates suggest approximately 200 people were killed.

The Spanish civil war started in July 1936, and was an attempt by the Nationalist General Franco, who controlled the Spanish military, to overthrow the Republican Spanish government. By the end of 1936, Franco’s Nationalists controlled 50% of Spain. Franco ultimately won the civil war and led Spain as a dictator until his death in 1975. The civil war is thought to have resulted in 500,000 to 1 million lives lost. Germany supported Franco throughout the civil war, principally through the Condor Legion of the Luftwaffe.

The bombing of Guernica is one of the most known aerial bombardments in history, not least because of Picasso’s painting of its horrors. It is widely considered to be the first ever deliberate aerial bombing of a city by its own military. Guernica, 20 miles from Bilbao, was an ancient Basque town which had, up until 26 April 1937, been relatively untouched by the Spanish civil war. It was seen as the centre of Basque nationalism, but the bombing of the town completely destroyed the will of the Basques, and Franco’s men overran it three days later.

The casualty figures from Guernica vary massively and are widely disputed. This is largely because it is unclear whether a market was being held on the day of the attack.

The bombing was carried out by the Condor Legion of the Luftwaffe, aided by bombers from the Aviazione Legionaria, the Italian version of the Condor Legion. A mixture of high explosive and incendiary bombs were dropped on the town, creating death and devastation. It is thought that approximately three-quarters of Guernica was destroyed in the aerial bombardment.

The Guernica raid triggered much stronger reactions than earlier bombings. The New York Times heavily criticized the ‘wholesale arson and mass murder, committed by Rebel airplanes of German type,’ and the headline of a report in Reuters titled Guernica as ‘the most appalling air raid ever known.’

George Streer, an eyewitness to the aftermath of the bombings, spoke of the importance of the raid, and its impact on civilians: “The raid on Guernica is unparalleled in military history…the object of the bombardment was seemingly the demoralization of the civil population and the destruction of the cradle of the Basque race.” Guernica was in no means a military target, and the impact of the raid was felt squarely by the civilian population.

This early example of bombardment from the skies being used to destroy the civilian population in a town was a pre-cursor for aerial bombardment in the Second World War. Hitler reportedly used the Spanish civil war as a means to develop aerial warfare tactics which were used during Germany’s blitzkrieg through Europe during the early years of the war.