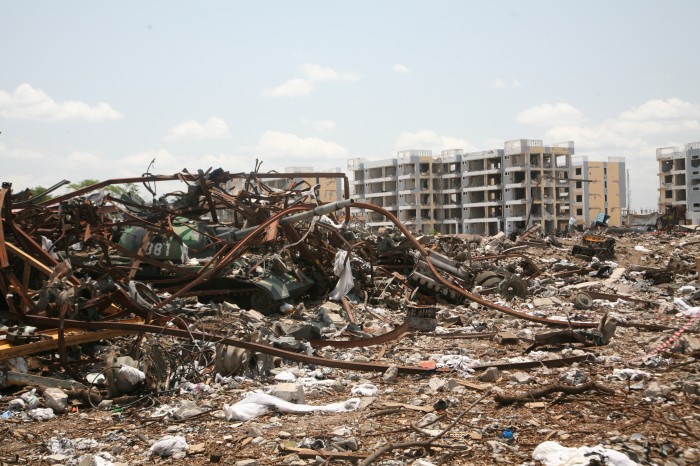 “These stockpiles can form a double problem in themselves. Where researched, it has been demonstrated that much of the ammunition circulating among armed non-State actors has been illicitly diverted from State security forces. And warehouses of ammunition, some- times placed in densely populated areas, have recently exploded in a number of countries, including Afghanistan, Albania, Mozambique and Nigeria, causing thousands of casualties.” Ban Ki-moon, UN Secretary-General, April 2008

This month, Small Arms Survey has published a global review of unplanned explosions at munitions sites (UEMS) over the last 35 years. UEMS are accidents that result in an explosion of abandoned, damaged, improperly stored or properly stored stockpiles of weapons and ammunition. They often result in dozens of casualties and cause huge amounts of damage to surrounding buildings, infrastructure and homes.

In 2012, AOAV met with victims of a stockpile explosion which took place in a populous neighbourhood of Brazzaville in the Republic of Congo.  At least 300 people were killed and thousands more were wounded in the explosion. Many homes and schools were destroyed by the blast and, months later, thousands of people were still in camps for the displaced. The cause of the explosion was unclear, with some reports suggesting an electrical short circuit had started the fire that detonated bags of mining explosives stored in the stockpile.

Small Arms Survey documented more than 500 unplanned explosions like the one in Brazzaville between 1979 and 2013. Almost 60 per cent of the incidents recorded occurred between 2003 and 2011. However, this increase may be down to improvements in the reporting of these events as well as due to natural deterioration of primers and propellants over time.

UEMS were recorded around the world in 100 different countries. Every continent other than Antarctica was affected and there was an average of 800 casualties caused each year. 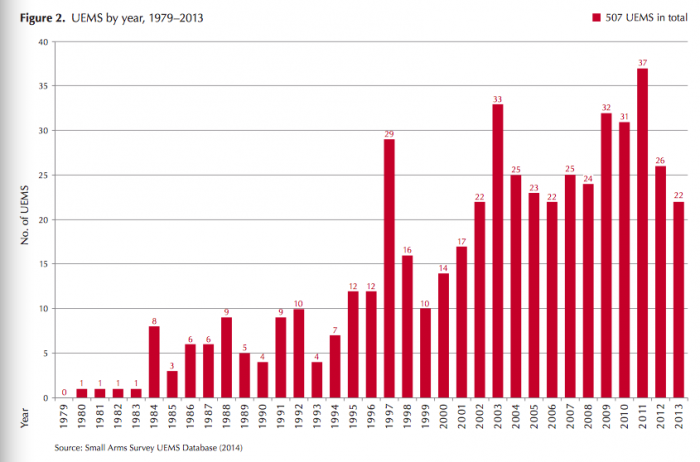 The report highlights the link between a country’s wealth and the number of casualties which follow these disasters. The United States experienced nineteen UEMS in the past 35 years, but suffered only 36 casualties. A key reason for this may be that in developed countries munitions depots are built away from civilian-populated areas so reducing the danger they face.

The danger doesn’t end there though. As well as the risk of accidental detonation, stockpiles which are poorly secured increase the risk of weapons and explosives falling into the wrong hands. In particular there is a danger that materials from these deptos can be used to make improvised explosive devices.

For example, shortly before the invasion of Iraq 342 tonnes of HMX, RDX and PETN high explosives disappeared from the Al-Qaqaa weapons facility near Baghdad. Access to explosive munitions was so widespread in Iraq that militants frequently loaded artillery shells, tanks shells, rocket warheads and mortar bombs into cars to make vehicle borne IEDs.

In 2008, US Defense Secretary, Robert Gates, said:  “We have destroyed several hundred thousand tons of Iraqi munitions. I mean, fundamentally, the entire country was one big ammo dump. And there were thousands of these sites… we’re doing our best to try and find them, but given the expanse of the country and all the other tasks which the military is trying to carry out there, it’s a huge task.”

IEDs have caused over 50,000 civilian deaths and injuries in the last three years, according to data compiled by AOAV. States and other actors should look for ways to reduce this harm, including by making it tougher to access the necessary materials and components.

Small Arms Survey lay out a number of ways for reducing the risk of unintended explosions and making stockpiles more secure. Simple measures like installing proper doors and locks, using adequate fences, properly training staff and ensuring munitions are sorted and stored appropriately can have a significant effect. Moving stockpiles away from populated areas also reduces the risk of harm to civilians in the event of an accident.