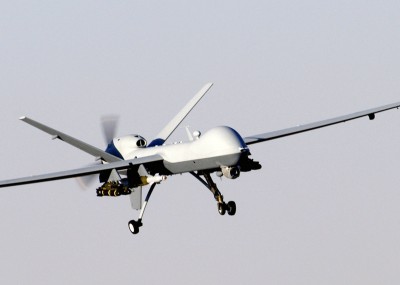 A drone similar to that used in this attack.

Significance: US drone strike which allegedly killed civilians in a wedding procession. The strike demonstrates many of the contentious issues which surround drone strikes, such as: the difficulty in identifying casualties; the competing reports on the status of casualties as civilians or combatants; the silence of the US government; the impact of drones on civilians.

Who: Allegedly US CIA, or US military forces

Impact: Between 12 and 17 individuals were killed, and 5 to 30 were reported as injured. The drone strike hit a wedding convoy which was carrying 50 to 60 people from the groom’s home to the bride’s home. All of those killed were from two families.

Since the terror attacks in September 2001, the US has carried out targeted killings in Yemen, Pakistan, and Somalia. It is thought that they may be carrying them out elsewhere. In Yemen, the US strikes have been carried out by the CIA or the Joint Special Operations Command, an arm of the US armed forces. Drone operations in Yemen are part of a joint US-Yemeni campaign against al-Qaeda, although it is not clear whether the Yemeni government authorises each strike. The US has been carrying out covert drone strikes in Yemen since 2002. In this time they have carried out a confirmed 65 to 77 drone strikes, killing between 339 and 494 people, including a minimum of 64 civilians.

There is an extensive lack of transparency surrounding drone strikes. The strike of 12 December 2013 demonstrates the difficulties which this lack of transparency creates. It is unclear how many people were killed and injured by the strike, with estimates ranging from 17 casualties to 47. The status of those killed as civilian or militant is highly contested, with officials claiming that the strike targeted a ‘mid-level’ al-Qaeda member. However, local witnesses and relatives of the dead claim that they were all civilians.

When asked about the strike, US officials have refused to comment. Two US bodies, the CIA and the military, fly drones over Yemen. Under US regulations, CIA operations cannot be acknowledged, whereas military strikes can. This means that US officials cannot explain the details of a drone strike without inadvertently revealing which body carried out the strike. The unwillingness of the US to discuss specific drone strikes leaves a high amount of uncertainty about who is actually affected by these strikes.

Yemeni officials and witnesses also gave conflicting accounts of the 12 December strikes. Locals claim that the wedding procession was made up entirely of civilians, stating that the al-Qaeda member the strike was targeting lived in a completely different part of the country. General Ali Mohsen Mothana and Al Ghahiri al Shadidi, the provincial governor, apologised for the strike, giving the families of the victims the equivalent of £95,000 and 101 Kalashnikov rifles, a traditional tribal apology. This suggests that they thought the victims were all civilians.

However, Yemeni officials claimed that the dead were all militants.

Drones, both armed and unarmed, are fast becoming a major tool in modern warfare. Yet secrecy still surrounds much of their use. This makes it hard to understand their role and the legal issues that they raise. AOAV believes that there is an urgent need for more transparency, especially in terms of detailed casualty recording but also with regards to the actual capabilities and precision of drone technology.