Emery Minani is a 31 years old ex-combatant who was born in Gitega, central Burundi.  He was 13 years old when he was forced to join the rebels in 1996.

“I firstly joined the CNDD (National Council for the Defence of Democracy) rebellion but deserted in 2000. I did not take arms because I wanted to kill people; I did it because I was recruited by force” said Emery.

“When I got back in my community in 2000, I decided to go back to school; however I was always on the run because the government army would chase me and wanted to catch me and kill me as they knew that I was a combatant. I then moved to Gatumba in Bujumbura Rural where I studied until 2002 and obtained a 10th grade certificate”. 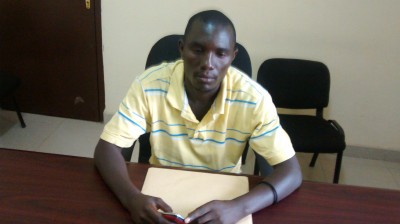 As the political situation worsened in Burundi he again joined the rebellion but this time with FNL (National Liberation Front) and was stationed in Rukoko Forest, in northwest of Burundi.  There he found thousands of young people waiting to be deployed to other provinces around the country.

Emery mentioned that a large number of innocent civilians were murdered, raped and tortured by the rebellion forces. He witnessed his fellow colleagues being tortured and killed by his superiors.

After the electoral violence that occurred in 2010, he decided to go back to school to finish high school and graduated in 2013.  His profound experiences strengthened his desire for peace and non-violence and Emery is no longer affiliated to any political party and is committed to work towards peaceful elections in 2015.

This past May, Emery was selected to be a peer-support worker amongst twenty other young men and women selected by CEDAC (Center for Training and Development of Ex-Combatants) in collaboration with AOAV. This project aims to reduce the involvement of youth in political violence in view of the upcoming 2015 elections by reducing their vulnerability to manipulation.

Emery has now started to work with youth in his community, helping them to become positive community leaders as well as assisting them in starting up their own income-generating activities. Ex-combatants are often used by politicians for violently intimidating their oppositions, and as an ex-combatant himself, it will be easier for Emery to approach them and build trust.

Emery concluded, “I am very thankful for the training as it gave me the opportunity to learn a lot of things. Now with the non-violent communication and conflict resolution skills I learnt, I am able to conquer my anger and be tolerant towards others. Also with the entrepreneurship skills that I acquired, I am no longer scared to start up my own business. Thanks for the project as it offered me my first chance at employment and for the first time in many years I feel that I can accomplish something in my life.”