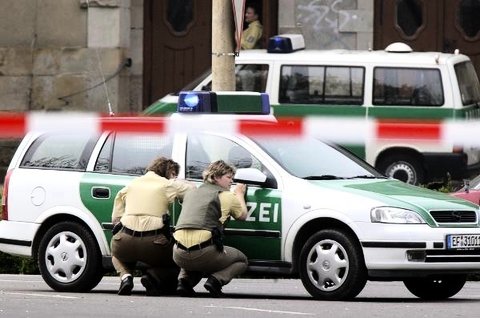 Weapons: 9mm Glock 17C semiautomatic pistol; Mossberg 590 Mariner 12-gauge pump-action shotgun (which he did not use)

The gunman chose the last day of student written examinations (Abiturprüfungen) to launch his shooting spree[1]. When he entered the school at approximately 11 am, he changed into a black outfit and started moving from classroom to classroom, pausing briefly in each doorway to shoot the teacher. Students testified that the gunman aimed only for the teachers and administrators, although two students were killed by shots fired through a locked door. Five minutes after the shooting began, police arrived outside the school. Soon after, the gunman aimed from a window and shot a police officer in the head.

One of Steinhäuser’s teachers confronted him verbally, then pushed him into a room and locked the door. Shortly later, police heard a gunshot from the room – the sound of the gunman turning the gun on himself. 71 rounds were fired throughout the whole series of shootings.

Contrary to popular belief, the former student was not legally entitled to own the guns he used in the shooting. Due to an invalid registration, his firearm licence was obtained illegally[2]. Local authorities failed to notice this during the acquisition of the licence and later during the purchases of two firearms[3]. 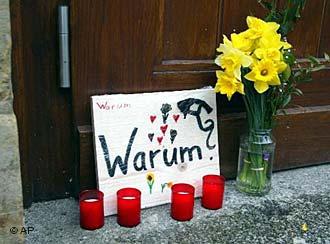 According to the Federal Weapons Act of 1976, the minimum age for gun ownership in Germany was 18 or older[4]. Prospective gun owners were required to pass a personal aptitude test examining ‘trustworthiness, knowledge, and accuracy’ and to prove necessity, which included hunting and membership at shooting clubs[5]. Pursuant to the legislation, there were three separate categories of licences: one for collectors or dealers, one for non-assault weapons, and one for single-shot short and long firearms.

Before the massacre, conservatives heavily protested the need for tougher gun control legislation stating that it leads to unnecessary bureaucracy harming those who own guns legally, instead of focusing on solutions targeting the issue of illegal gun ownership. However, views softened in the wake of the incident.

By coincidence, the German parliament had passed new legislation tightening gun controls the Friday after the shooting. However, after the shooting, lawmakers decided to impose stricter regulations than originally planned[6]. Faced with mounting public pressure, the new law was subsequently amended in October 2002. The Weapons Act (Waffengesetz – WaffG) as amended by the Act of Reform German Weapons Law (Gesetz zur Neuregelung des Waffenrechts-WaffRNeuRegG) of 11 October 2002, came into effect on 1 April 2003[7]. Moreover, the General Ordinance on the Weapons Act (Allgemeine Waffengesetz-Verordnung –AwaffV) of 27 October 2003, came into effect on 1 December 2003[8].

The new regulation introduced several important amendments. It increased the minimum age at which athletes and hunters can acquire powerful weapons to 21[9]. In addition, it required a psychological attestation of the applicant’s mental fitness, if younger than 25 years[10]. The law imposed a restriction on large-calibre weapons to persons 21 years of age or older[11] and prohibited pump-action shotguns[12]. The new rules required official licensing of shooting sports clubs[13] and forbade throwing stars and particularly dangerous knives (e.g. switchblades)[14].

In order to limit the availability of firearms to unauthorised persons, the new law enhanced provisions governing the storage of firearms[15]. It also required that weapons dealers report the sale of weapons within two weeks of their purchase[16]. Non-lethal weapons and signalling devices such as flare guns were permitted without authorisation, but since 1 April 2003 a ‘minor firearms certificate’ (Kleiner Waffenschein) has been required to carry such guns in public[17].