This month there were almost 2,000 casualties of explosive violence (people killed and injured). Civilians made up 74% of all the people who were recorded killed or injured around the world by explosive weapons. 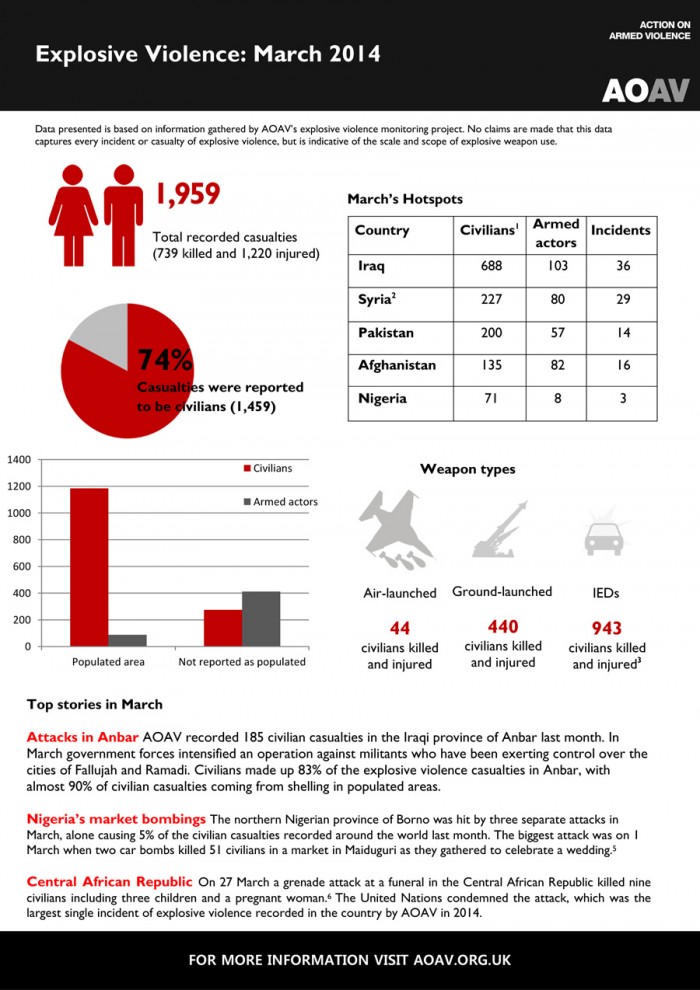 [3] A further 32 civilian casualties were caused either in attacks that involved a combination of launch methods, or by landmines (which are separated for analysis because it is often unclear whether attacks reported to involve ‘mines’ in fact were caused by roadside improvised devices).

[4] Incidents are designated as occurring in populated areas if: a) It is stated in the source (e.g. a busy street, a crowded market etc); b) If an incident occurs in or near a pre-defined location which is likely to contain concentrations of civilians: Commercial premises, Entertainment venues, Hospitals, Hotels, Encampments (IDPs, Refugees, Nomads) , Markets, Places of worship, Police stations, Public gatherings, Public buildings, Public transport, Schools, Town centres, Urban residential neighbourhoods, Villages/ compounds. Other locations recorded include: Agricultural area, Armed Base, Road, and Transport-related infrastructure. Incidents which occurred in these locations are recorded as ‘Populated area’ if details of the media report state that they were located in or next to any of the locations classified as likely to be populated. If there is insufficient or unclear information, then it is recorded as ‘Unclear’, and combined with the ‘Not reported as populated area’ category for analysis.