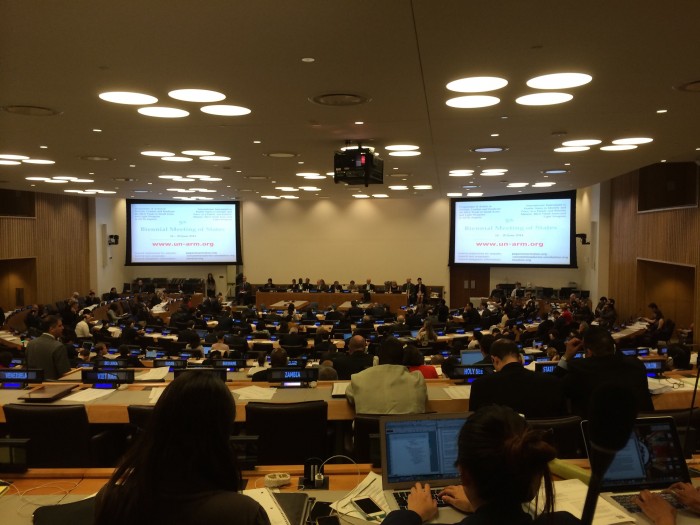 This week sees the Fifth Biennial Meeting of States (BMS5) take place in New York, from the 16th-22nd June, to consider implementation of the UN Programme of Action (PoA) to Prevent, Combat and Eradicate the Illicit Trade in Small Arms and Light Weapons in All Its Aspects.

It has been 13 years since UN member states signed the PoA and agreed to implement a range of processes and regulations at the national, regional and global levels to counter the illicit trade and uncontrolled circulation of small arms and light weapons (SALW). However, little real progress can be seen in the ultimate aim – reduction of victimisation by illicit gun violence. There are an estimated 875 million SALW in circulation worldwide. These SALWs, which are easily available for purchase on the black market by militias, insurgents and criminal gangs, are directly responsible for most of the conflicts and armed violence experienced around the world.

This is why the International Action Network on Small Arms (IANSA) has strategically placed its yearly Global Week of Action Against Gun Violence – its week-long international campaign to stop the proliferation and misuse of SALWs – to coincide with the BMS5. While IANSA members organise events this week to illustrate the year’s theme, Stop Gun Violence and Save Lives, states will meet to review the progress of the PoA and assess its implementation. They will discuss ways forward, and in particular will cover three main topics: stockpile management of weapons, international tracing and marking of weapons, and international cooperation and assistance. Expectations are low. Some have even said that should there be an agreement on any kind of a text, the meeting can be considered a success. We disagree. Adopting texts without meaning and without potential for positive change based on it, is an exercise in futility. And a wasteful use of resources.

Work to campaign for better gun laws and push for stronger regulation of the global arms trade resonates with AOAV. We have always strived to be a global leader in research, advocacy, and programming designed to lessen the impact weapons have on violence worldwide and to ensure that weapons, to the greatest degree possible, are used for only responsible and legitimate purposes.  AOAV’s history as one of the leading voices in the United Kingdom supporting the campaign to ban landmines and cluster munitions continues to inform its advocacy work, as AOAV actively lobbied for victims’ rights to be included in the recently concluded Arms Trade Treaty (ATT) negotiations. AOAV currently work in Burundi, Sierra Leone, Liberia, Western Sahara and Nigeria to address each country’s continuing supply and use of firearms.  In these countries we carry out the following programmes:

As such, AOAV supports civil society’s initiative to raise awareness about the threat of weapons and looks forward to the strides the Week of Action will make in reducing gun violence.

Stay with us as we update you throughout the week about how truly progressive the delegates here will be and whether the document that comes out has any potential for making the world a safer place and, as States said in the original PoA, “respect the dignity of the victims.”