To celebrate International Women’s Day this 8th March, Action On Armed Violence (AOAV) is supporting women survivors of armed violence and women with disabilities in Burundi to campaign for their rights. As part of its peer support outreach and advocacy training programme, AOAV launched a contest to sing out and promote the rights of vulnerable Burundian women. The winners got to record their song in a professional studio in the capital city, Bujumbura, and the song has been used in a series of radio spots played on three of the main national radio stations.

The winning group, who are called “We Are Able”, is made up of women and men with disabilities from an AOAV supported advocacy group. Their song “Agateka Kaba Mugaye” is written in Kirundi, Burundi’s national language, and means “The Rights of People with Disabilities”.

With the support of the Australian Government (AusAID) and the Government of Norway, AOAV has supported almost 50 vulnerable women, including women with disabilities, to form advocacy groups and lead their own national advocacy campaigns to promote their rights and the ratification of the Convention on the Rights of Persons with Disabilities (CRPD). The CRPD was voted and passed by the Burundian Parliament on 6th March, just in time for International Women’s Day, and is something else to celebrate on Saturday!

As well as supporting advocacy training, AOAV also provides much needed psychological counselling to vulnerable women survivors and women with disabilities, who face discrimination, marginalisation and are excluded from education and job opportunities. AOAV implements this work with its local partner Centre for Training and Development of Ex-Combatants (CEDAC) and so far has provided this vital support to 1,062 women.

Whilst International Women’s Day is a time for celebration, it’s also a time to remember that women in armed violence-affected countries, like Burundi, face significant challenges in attaining their rights to health and education, employment, and inclusion in decision-making processes. Women survivors of armed violence and women with disabilities face higher risks of gender based violence, discrimination and socio-economic marginalisation. Not only are women’s rights violated, the marginalisation of women impedes the recovery of this central African country in transition from devastating conflict. 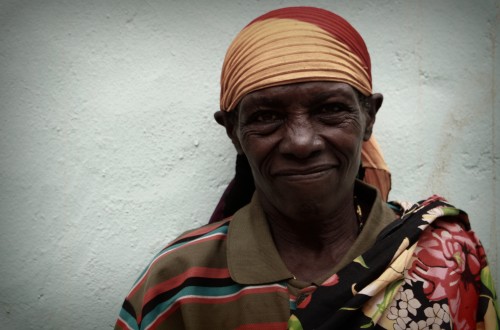 Adèle Ndarphimi, a beneficiary in AOAV’s programme, has faced many hardships in her life and was severely affected by Burundi’s civil war. The legacy of the violence impacts her still.

Adele shares she story with AOAV:

In the mid-1990s, Adèle was pregnant and living with her family in Rutegama in the Muramvya Province of Burundi. At the height of the fighting, her village was informed about a military raid that would happen the following day, so Adèle and her family started packing to escape. Whilst they were preparing to flee, Adèle went into labour.

Adèle gave birth to a baby boy. Feeling happy and sad at the same time, she had no choice but to stay in the village.  Surrounded by the yells of soldiers and continuous gunshots, Adèle hid under the bed with her son and prayed to survive.

The soldiers stormed into Adele’s house and opened fire, shooting her in the legs three times. Fortunately, the soldiers did not uncover Adèle or her one-day-old son, and they both survived. Her family and friends who tried to escape did not. Adèle would never see her husband again.

Three days after the raid, Adèle was still in hiding with her baby when the Red Cross came to bury the bodies with dignity. Adèle and her son were taken to hospital where the bullets were taken out of her feet and legs. Ever since the shooting, Adèle limps and suffers from chronic pain.

Adèle lives in the district of Muramvya in central Burundi. She produces and sells ceramic pots and has a little field where she grows tomatoes and beans. Her son, Mpawenimana (which means “Gift of God” in Kirundi) is now married with a family of his own.

Adèle is an active member of AOAV’s advocacy programme. Adèle says: “I have learned about my rights and the CRPD. I am happy to have the skills to advocate for ratification of the CRDP and its implementation by the Burundian government.” She says that the project has helped her recover her human dignity as a woman first, but also as a person living with disability.

This International Women’s Day, join AOAV to promote the rights of women survivors and women with disabilities like Adele and celebrate their courage to raise their voices and sing out for their rights!