At least 118 people are now thought to have been killed in yesterday’s catastrophic bombing in central Nigeria. With casualty numbers still rising, the attack in the city of Jos will be one of the deadliest to hit the country in years. As Action on Armed Violence (AOAV) revealed in last year’s ‘The Violent Road’, Nigeria is a country already plagued by high levels of armed violence. The dramatic spike in attacks with improvised explosive devices (IEDs) over recent months will hasten Nigeria’s steady descent into chaos and calamity.

Jos was hit yesterday by two car bombs that detonated within half an hour of each other. The attack targeted the city’s Terminus market, which was crowded with traders and shoppers. Some reports suggest that the first attack may have involved a suicide bomber, though this is unconfirmed. A further 45 people were wounded by the blasts, and with more people thought to be buried below the rubble of the ruined market, the death toll is expected to rise still further.

At this point there has been no claim of responsibility for what will be the deadliest explosive attack in Nigeria since 20 January 2012, when 186 people died in gunfire and over 25 separate IEDs in Kano.

AOAV records the impact of explosive weapons around the world from the reporting of English-language news sources. Even before yesterday’s attack, our casualty data shows a severe escalation in Nigeria’s explosive violence in 2014.

Civilian casualties from explosive attacks in Nigeria are set to exceed the total recorded by AOAV in previous years. 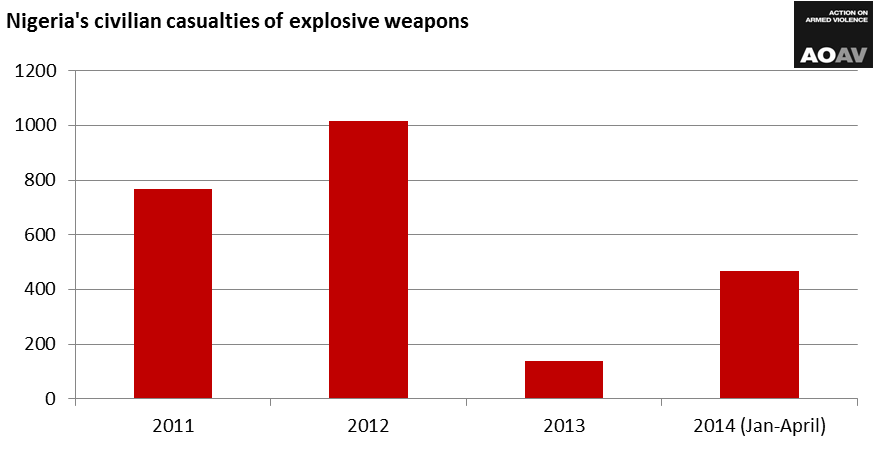 As the graph shows, after just four months, civilian casualties in 2014 have already vastly outstripped the toll recorded last year. The attacks in Jos come hard on the heels of a bombing in Kano just two days previously, and a rush-hour blast at a busy bus station in the capital Abuja in which 75 people died. The increasing frequency and severity of these attacks are fuelling a steady slide into chaos in a country which is already one of the most violent in Africa. After a significant drop in 2013, explosive violence in Nigeria is returning to the high levels that saw it become one of the five countries most-affected by explosive weapons in 2012. 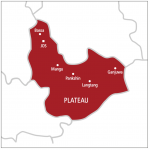 a comprehensive overview of the state of armed violence in Nigeria. “The Violent Road”, produced with a coalition of Nigerian civil society groups, warns of the fault-lines and drivers of armed violence that threaten civilian lives and livelihoods in the country. Understandably in a country of such size and complexity, there are important regional variations in Nigeria’s armed violence. Jos is the capital of Plateau State, among the most heavily-affected states in Nigeria. Plateau has experienced very serious inter-communal violence since 2000, with clashes erupting sporadically over the last fourteen years.

The issue of inadequate civilian protection in Nigeria has been dominating global headlines in the last month since the abduction of up to 300 girls by the Islamist militant group Boko Haram. The Violent Road shows the persistent menace that civilians in Jos and across Nigeria have had to face from armed violence. This threat is increased significantly by the threat of frequent large-scale bombings. The attack on the Terminus market is the first IED incident in Jos since August 2012.

It is unlikely to be the last.

AOAV is leading civil society efforts to recognise, stigmatise and challenge the threat from IEDs. More can and should be done to tackle the impact of these weapons, from the closer regulation of source materials, to the accurate recording of the casualties of these weapons and the provision of full assistance to the victims.

To find about more about AOAV’s work on IEDs see: IEDs and suicide bombings