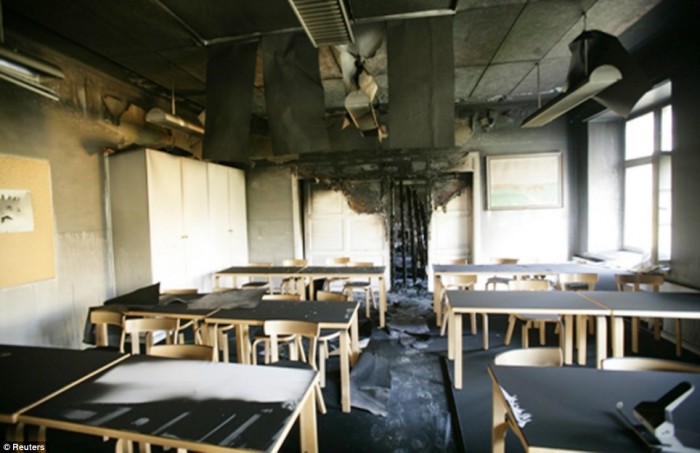 The shooting began around 10:40 a.m. when the gunman entered a classroom where students where taking an exam and opened fire. He then stepped into the corridor and loaded a new clip into his gun. Having re-entered the classroom, he shot the teacher and moved around the classroom, shooting whenever he noticed someone made a sound or move. One student survived despite being shot in the head. The gunman then spread petrol on the classroom floor, set the room alight, and exited through the back door[1].

Nine victims were found in the exam room. One student who had fled the burning classroom later died in the corridor. Nine of them were classmates of the gunman and one was a member of staff. The gunman remained for some time in the school grounds after it had been evacuated. He was found alive by the police having shot himself in the head, but died later at the hospital. He had fired 157 shots[2]. In total, 62 bullets were found in the bodies of the victims[3].

On 25 June 2008, the gunman had delivered a personal firearm permit application for a Walther P22 pistol. According to the application, he intended to practice precision shooting and had joined the local shooting club. However, this information was not correct as it later transpired that the fee the perpetrator had paid to the shooting club only entitled him to use the shooting range. In accordance with standard policy, he was invited to a personal interview on 7 August 2008, after which he was granted a firearms purchase licence. Using this licence, the shooter ordered a Walther P22 pistol, eight 10-round magazines and 1000 rounds of ammunition from an online shop[4].

It transpired that the gunman had been suffering from mental health problems for 10 years prior to the shooting[5]. Shortly before the shooting he was interviewed by the local police for uploading a video of himself on the internet firing a gun. The officer concerned found no legal cause to arrest him or to revoke his firearm licence[6]. 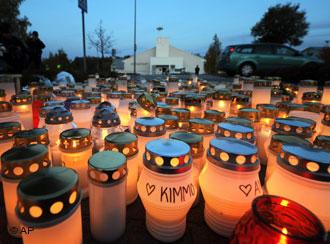 Finland’s gun regulations were relatively lax. The guiding gun control legislation in Finland at the time was the Firearms Act of 1998[7]. Firearms could only be obtained with a licence granted by the local police department to a person who was 15 to 17 years old, with parental consent for the purpose of target shooting or hunting[8], or to an individual who was at least 18 and who, ‘on the basis of his or her state of health and behaviour is deemed suitable for handling firearms.’ Thus, applicants were subjected to background checks on the grounds of mental health and criminal records in practice if not by law.

In order to be granted an acquisition permit, a person was required to declare a valid purpose for the use of the firearm, such as hunting or target shooting. However, ‘self-defence’ was not listed as an approved purpose[9] and the firearms were not to be ‘unnecessarily powerful or efficient’ relative to the use specified by the applicant[10].

In the past, gun control advocates had come up against a wall of cultural opposition; Finland has a long gun tradition closely tied to hunting. However, in the wake of the Kauhajoki shooting, the gun licence discussion between the police and the gunman ensured that nearly every media outlet in Finland took up gun licence issues[13]. Thus, after the second massacre of the year, the country’s culture of gun ownership was called into question. The government acknowledged that more stringent gun control was needed and the Minister of the Interior contended that by reducing the number of handgun licences issued, another mass shooting was made less likely in the future.

The investigating commission recommended that firearms capable of firing multiple shots in a very short period of time be made illegal, and that only guns with limited effective rates of fire be available for hobby purposes[14]. However, in preparing a new bill in August 2009, the government decided not to impose a complete ban on any particular type of firearm.

The Amendment limited the purchase and possession of pistols and revolvers, and raised the minimum age requirement of gun licences from 18 to 20 years. In addition, a Finnish citizen was required to pass an aptitude and suitability test to apply for a gun licence. New applicants for handguns were required to provide evidence that they had been an active member of of a gun club and had to provide proof of a minimum two years of supervised target practice at the club in the form of a signed certificate of a trainer authorised by the police. If necessary, the police were allowed to ask for a medical certificate providing health information of the application. The new Gun Control Act also gave doctors the obligation to circulate a notice to the police when an applicant is not suitable to hold a gun according to his or her health condition.