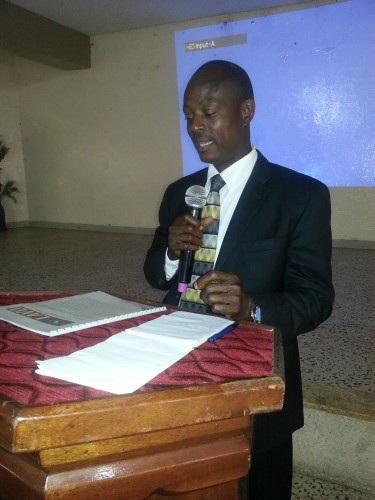 Hon. Gabriel B. Smith delivers the keynote address at the launch of the LAVO’s fifth report on armed violence.

The Liberia Armed Violence Observatory (LAVO) recently launched its 5th report on armed violence in Liberia. The theme of the report focused on assisting development practitioners to take into account the threat that armed violence poses to development, a particularly relevant issue as policy makers consider the inclusion of peace and security indicators in the post-2015 development agenda.

Attending the launch were representatives from Government, including the Ministries of Defense, Justice, State, and Health and Social Welfare, local hospitals, and civil society. Vivian D. Dogbey, Senior Technical Advisor with the Liberia National Commission on Small Arms (LiNCSA) and the LAVO Chairperson, pointed out that armed violence is increasing, and called on the Government to take the work of the LAVO seriously.

Hon. Gabriel B. Smith, Representative of District 3, Grand Bassa County, served as the key note speaker. He highlighted that armed violence continues to undermine peace and development in Liberia, and said that “the LAVO report calls for serious reflection on our part as Government.” 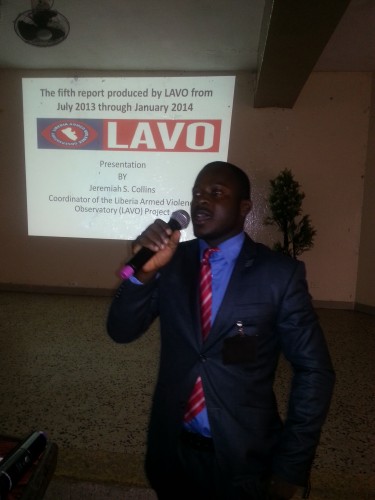 LAVO staff member Jeremiah S. Collins provides an overview of the findings of the report.

While the highest number of incidents were reported in Monrovia and Montserrado County, this is likely because the majority of current data providers are located in these areas. The LAVO is working to increase the number of data providers around the country, as well as improve their ability to report on incidents of armed violence.

Earlier this year, the LAVO was supported with an exchange visit from experts in epidemiology and injury surveillance from the Centers for Disease Control and Prevention (CDC)[1]. The CDC helped to develop standardised reporting tools, including a database and electronic and paper reporting forms, and trained data providers and LAVO secretariat staff in the use of these tools. By reducing the amount of time spent on manual data entry and validation, the LAVO staff will have a greater ability to analyse armed violence data.

The LAVO provides an important function by monitoring armed violence systematically; analysis of this data can identify hot spots and trends and signal to stakeholders, particularly in government, where increased efforts for tackling violence need to be made and what kind of interventions might be effective.  It is up to development policy makers and practitioners to use this data and address these societal problems before they deteriorate.  Liberia has made great strides since the end of its civil war in 2003, but underlying tensions remain, as evidenced by the recent violence in West Point as a result of measures taken to contain the Ebola Virus Disease. Use of LAVO data can help the Government of Liberia make informed and targeted interventions and slowly rebuild the trust of the Liberian people.

The report is available here.

Established in 2011, the LAVO is an independent body that collects and analyses data on armed violence throughout Liberia. Learn more about the Observatory and its previous reports here.

[1] This exchange visit was supported using funds provided by The Nexus Fund.