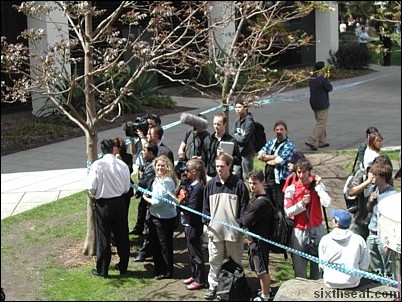 The shooting began at 11.24 am when the gunman, who was suffering from paranoid delusion disorder, was attending a tutorial on econometrics on the sixth floor of Monash University’s Robert Menzies building. That day the shooter, who was facing substantial difficulties communicating in English, was due to give his final oral presentation. [1]


The gunman climbed up on a desk, shouting ‘you never understand me,’ then opened fire on the group of eleven students in the classroom. Armed with five handguns, he killed two students instantly and severely wounded four others and a lecturer. Several victims suffered multiple gunshot wounds.  When the gunman stopped shooting and moved to switch weapons, the injured lecturer and students subdued him.


Six months prior the shooting, the gunman acquired a gun licence and legally bought seven firearms. He had joined the Sporting Shooters Association, a gun club, and attended target practice.

After the massacre at Port Arthur in 1996, the Australian government reformed, centralised and strengthened its gun control regulations. The reforms banned most semi-automatic and pump action shotguns and rifles and strengthened regulations on gun ownership generally. The focus on long guns was based on the fact that the Port Arthur shooter had used military-style rifles.

The shooting occurred amid heightened nervousness in the country thanks to bombing the previous week in Bali that killed many Australian tourists. Despite low levels of violent crime generally and the consistent decline of crimes that that involved firearms, [2] the incident was not dismissed as an isolated issue. The Prime Minister pointed to the independent evidence that the guns buyback that followed the Port Arthur massacre in 1996 was successful in reducing gun related homicides in the country. Thus, the shooting ignited demands for further measures to restrict access to guns.


The government coordinated additional legal restrictions on handguns through the enactment of the National Handgun Buyback Act 2003, the National Firearms Trafficking Policy Agreement (NFTPA) 2002 and the National Handgun Agreement (NHA) 2002. The aim of the agreements was to implement a uniform national approach to further measures to reduce the circulation of small concealable handguns such as ‘pocket pistols’ and to enhance significantly controls on access to handguns by sporting shooters.


The National Handgun Agreement contained 28 resolutions imposing restrictions with regard to the availability and usage of handguns, particularly those that are easily concealable. It limits the possession of handguns based on calibre, barrel length and magazine capacity. In addition, the Act maintains a system of graduated access to handguns for legitimate sporting shooters to inhibit ‘club shopping’, through the introduction of requirements for a person wishing to join a club to provide details to the club of any other shooting clubs to which they belonged and the firearm they possessed. Handguns would be limited to a maximum of .38 calibre (up to .45 calibre for shooters attending specifically authorized sporting events), with prohibition of semi-automatic handguns with a barrel length of less than 120mm, and revolvers and single shot handguns with a barrel length of less than 100mm.


The National Handgun Control Agreement was accompanied by a $118 million national handgun buyback. The National Handgun Buyback Act 2003 contained the rules for fiscal measures for the purpose of removing handguns from the general public circulation. The Act covered the period 1 July 2003 to 31 December 2003. The State’s buyback scheme allocated a qualifying payment for handguns, handgun parts or handgun accessories surrendered by a person during the buyback period to the State. To this end, gun owners were awarded between AUS$500 and $2000 for the most popular models of guns. Qualifying payments also included fiscal measures directly connected with handgun buyback administration and education or awareness strategies.[3]


In addition, in July 2002, the National Firearms Trafficking Policy Agreement imposed further restrictions to control and obstruct the diversion of firearms to the illicit market and facilitation of illegal transactions. The Trafficking Agreement sought to achieve this purpose through the establishment of new offences or substantial penalties for matters relating to tighter recording and reporting provisions for dealer transactions involving firearms and major firearm parts, the defacing of serial numbers.[4]