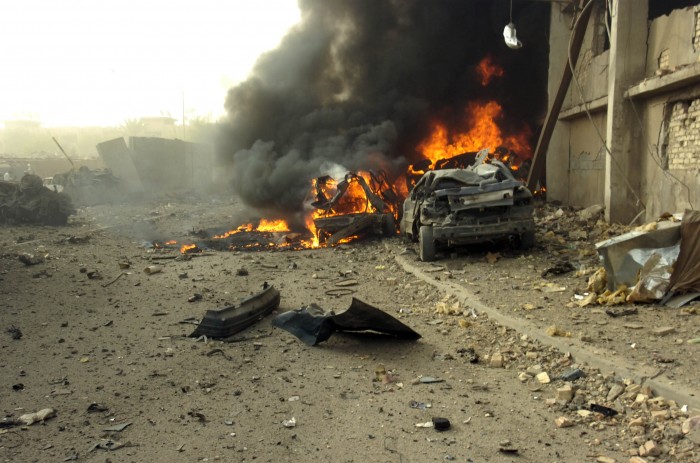 At least 21 insurgents have been killed while filming a propaganda video in central Iraq, wires have reported. The car bomb apparently detonated accidentally as the vehicle was being driven along a desert road about 12 miles from the city of Samarra early this afternoon. Twelve other militants were reported wounded.

Action on Armed Violence (AOAV), a London-based charity, has been collecting data on the global casualties of IED attacks and suicide bombings by monitoring English-language media reports.

In January, AOAV recorded 38 attacks involving cars or trucks packed with explosive material across Iraq. These explosions killed and injured 720 people, only 10 of whom were reported to have been armed or members of security services. About three quarters of these car bomb attacks took place not on deserted roads but in locations like town centres and markets.

And it is getting worse.

January saw a 47% increase in the number of people killed and injured by car bombs compared to the same period last year when AOAV recorded 493 civilian casualties in 11 incidents.

Iain Overton, Director of Policy and Investigations at AOAV, said: “The vast majority of car bombs in Iraq do not get international media attention. The unique events around this explosion should not distract from the fact that most people killed there are civilians.”

Car bombings in Iraq are part of a broader global problem of IED attacks causing large numbers of civilian casualties.

In 2012, AOAV found that IEDs killed and injured a reported 20,914 people around the world, 81% of these were civilians.