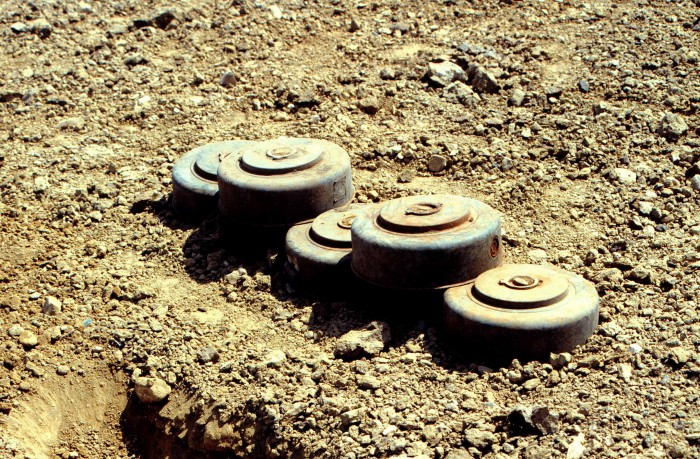 Over 47 million stockpiled antipersonnel mines have so far been destroyed by States Parties.

At the outset of an historic meeting of the treaty banning antipersonnel mines, AOAV, as part of the International Campaign to Ban Landmines, is challenging governments to take actions that will ensure that within ten years, no armed forces anywhere are still using antipersonnel mines, and there are no new casualties caused by the weapons. All States Parties to the treaty should finish clearing minefields within a decade.

Fifteen years after the first Mine Ban Treaty meeting was held in Mozambique – a country then heavily affected by landmines, but now nearly mine-free – the International Campaign to Ban Landmines joins over 1,000 delegates including representatives from States Parties, the United Nations, the International Committee of the Red Cross, and other international organizations in Maputo, Mozambique for the treaty’s Third Review Conference this week. The President of Mozambique, His Excellency Armando Guebuza, will address the meeting during the opening ceremony and will be joined by ICBL Ambassador and Nobel Peace Laureate, Jody Williams.

The meeting, which will take place from 23-27 June, will assess progress made to date in banning antipersonnel mines, clearing minefields, and helping victims, and will provide a roadmap for the work ahead. Mozambique, which takes up the treaty presidency this week, has set the stage for the meeting by committing to clear its remaining mined areas by the end of the year.

“Mozambique’s success story is the success story of the Mine Ban Treaty and for communities threatened by landmines around the world. Since the mine ban community ushered in the treaty in 1999 huge advances have been made toward putting an end to the suffering caused by antipersonnel mines; now it’s time to finish the job and to do it within ten years,” said ICBL Campaign Manager and landmine survivor, Firoz Alizada.

The Mine Ban Treaty has made huge strides with 161 countries on board today, a steady reduction in the number of landmine casualties each year, and an increasingly globally accepted norm against the use of antipersonnel mines. The anticipated announcement this week by Oman on joining the Mine Ban Treaty and the near universal respect for the norm against use in recent years demonstrate the continued strength of the treaty today.

Twenty-seven states contaminated with landmines have declared themselves mine-free since the Mine Ban Treaty entered into force, and this number continues to grow each year. During the past five years nearly 1,000 square kilometers of contaminated area has been cleared.

Over 47 million stockpiled antipersonnel mines have been destroyed by States Parties, with 87 states now done with this treaty obligation. One blight on the treaty’s record has been the fact that States Parties Belarus, Greece, and Ukraine missed their 4-year stockpile destruction deadline, though ICBL welcomes the recent news that Greece and Belarus are now making good progress toward finishing their destruction obligations.

The conflict situation in Ukraine highlights the need for states to make sure all mines are destroyed within their deadlines and ensure the weapons are never used. The recent flooding in the Balkans has also emphasised the indiscriminate threat landmines pose to communities and the need to clear contaminated land as quickly as possible.

Yemen recently became the first State Party to acknowledge that government forces had used antipersonnel mines—apparently in 2011 and 2012—the most serious violation of the treaty to date. The ICBL and States Parties have emphasized the importance of Yemen identifying those responsible and holding them accountable, as well as clearing the mines and assisting the civilian victims.

In preparation for this historic meeting, ICBL has issued a “completion challenge” to States Parties, calling on them to present clear commitments to complete their remaining treaty obligations, including clearance, victim assistance, and stockpile destruction, within ten years of the Review Conference. The ICBL also hopes to see no more new casualties and no use of antipersonnel mines anywhere within a decade.

There were fewer than 4,000 new recorded casualties from landmines and explosive remnants of war (ERW) in 2012 according to the Landmine Monitor, ICBL’s research arm. Yet this amounts to 10 individuals who are still being killed or maimed every day by landmines and ERW. “We can and should bring this number to zero new casualties within ten years of the Maputo meeting,” said Firoz Alizada. “Ongoing assistance for landmine victims is a lifetime commitment. Governments need to prioritize adequate availability and accessibility of services in areas where victims live,” he added.

ICBL’s completion challenge calls on all States Parties to complete clearance of all known mine contamination within the next decade. “The remaining antipersonnel mine threat can be removed in every State Party in less than ten years if operators, donors, and national authorities employ the right resources in the right way,” said Tamar Gabelnick, ICBL-CMC Policy Director. “Most importantly, states need to direct resources to areas with actual mine contamination rather than the large suspected areas identified through outdated surveys,” Gabelnick added.

The path to a mine-free world will be paved by universal respect for the mine ban norm, and universal adherence to the treaty. In fact, more than three-quarters of the countries in the world are already on board the treaty, and of those remaining outside, many have expressed interest in joining. Maputo is an opportunity for those countries, including the United States, to commit to join the treaty or announce steps toward joining.

The US which has been reviewing its mine ban policy for nearly five years, has called for the eventual elimination of antipersonnel landmines and has not used the weapon in more than two decades. It is past time for the US to join the Mine Ban Treaty.

Over 150 ICBL delegates from around the world including landmine survivors, mine action and victim assistance operators and researchers are participating in the meeting this week alongside Mine Ban Treaty States Parties and hundreds of other delegates.