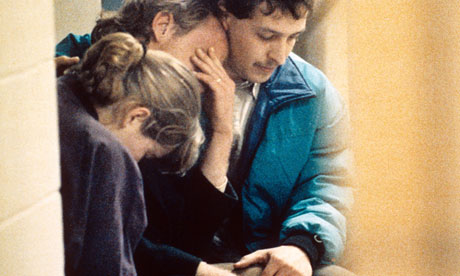 Weapons: .223 calibre Ruger Mini-14 rifle. The gun was purchased legally in a shop in Montreal in November 1989, shortly following the granting of Lépine’s firearms acquisition permit. The shooter also had with him three magazines with a total capacity of 65 rounds. 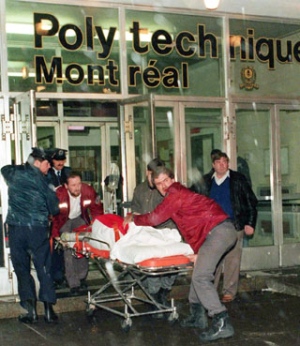 The shooter had been seen loitering around a university building between 4p.m. and 5p.m., a time when the school was very busy. He was not enrolled at the school and had never been a student there, although the coroner’s investigation found that he was very familiar with the campus. At 5.10p.m., he entered a room where a student was giving a presentation to a class. He fired a shot at the ceiling with a rifle and demanded that the men and women separate into two groups. He ordered the male students to leave the room and approached the nine female students who remained. He then engaged one of the women in a brief exchange, during which he declared his motivations for the attack. The shooter then opened fire on the women, shooting from left to right. Six of the nine women died. He then left the classroom and shot four more students who were in another room and in the corridor.

Over the next ten minutes or so, he moved around the same floor of the building, firing at three students, two of whom died. He then entered the cafeteria where about 100 students were congregated. He fired several shots in different directions, and killed two students who were hiding in a storage room. He instructed two other students to leave, and let them escape without injury.

The shooter then left the cafeteria area and after firing at students in the corridors, entered a classroom where he killed two more students, and injured many. At some points he aimed directly at individuals, and at other times he fired in all directions. He ended his killing spree by standing on the platform in the classroom and shooting himself.

The tragedy attracted particular attention and analysis due to the targeted nature of the shooter’s attack. The media pored over his decision to specifically shoot and kill women, as well as the details of his rambling suicide letter (which was not published in full). Parliament established the National Day of Remembrance and Action on Violence Against Women, to be held on the anniversary of the massacre every year.

Students of the Polytechnique circulated a petition calling for the banning of military-style weapons. The newly formed Canadians for Gun Control recommended actions such as licensing firearms owners, establishing a gun registry, and prohibiting military-style assault weapons. This group would later merge with students of the Polytechnique to form the Coalition for Gun Control, which exists today as Canada’s major gun control lobby group.

Bill C-17 was passed in 1991, in the aftermath of the tragedy at École Polytechnique. The Bill focused on military-style weapons, banning high-capacity magazines for automatic and semi-automatic firearms. The law imposed a 28-day waiting period in the application for a firearms certificate, requiring a photograph and two references, as well as further background information and screening of applicants. From 1994, applicants had to pass a firearms safety course as part of the certification process. The Bill also restricted most military style rifles and introduced new regulations for firearms dealers.

The Coalition for Gun Control claimed that the restrictions did not go far enough. The debate then lead to the introduction of the Firearms Act, which came into force in 1995. It went much further than Bill C-17 in its creation of the Firearms Registry, which required the registration of all non-restricted firearms. The Act also required all gun owners to have a renewable firearms licence and increased restrictions on handguns.

The registration requirements of the Firearms Act were dropped in the enactment of Bill C-19 in 2012. This aspect of firearms law is currently a topic of legal and political debate in Canada.