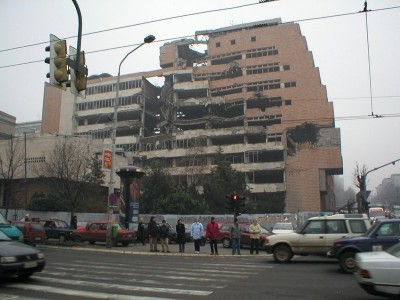 Significance: NATO used military force in the form of air strikes without the approval of the UN Security Council and against a sovereign nation that did not pose a threat to NATO members. NATO’s action resulted in the withdrawal of Yugoslav forces from Kosovo and ended the Yugoslav wars of the 1990s.

Impact: Ultimately, the air strikes resulted in the ending of the Yugoslav wars. But over 2,000 civilians were killed, 200,000 ethnic Serbs were forced to leave Kosovo, 300 schools and libraries were destroyed, as were over 20 hospitals. At least 40,000 homes were destroyed or damaged.

Throughout the 20th century ethnic Albanians and Serbs fought for control of Kosovo. Tensions escalated during the 1990s, after President Slobodan Milosevic began to remove Kosovo’s rights of autonomy in 1989. Yugoslav forces, under Milosevic, suppressed the ethnic Albanian’s independence campaign, while the Kosovo Liberation Army (KLA) increased their attacks on Serb targets.

During the later years of the 1990s an ethnic cleansing campaign against Kosovo Albanians began, leading to thousands fleeing to countries such as Albania and Macedonia. In 1999, levels of violence flared up. The international community attempted to broker a deal to end the conflict. This deal was agreed to, albeit reluctantly, by the ethnic Albanians, however Milosevic refused to agree to it.

During the air campaign, 2,300 missiles were launched by NATO, and 14,000 bombs were dropped, including uranium bombs and cluster munitions. Over 2,000 civilians were killed, with many more injured. NATO strikes hit schools, libraries, hospitals, homes and historic monuments. There were numerous incidents in which NATO fighters hit civilian locations, including an incident in which they accidentally bombed a column of refugees, reportedly killing over 60. The Chinese embassy was hit, as were structures such as bridges, killing civilians passing over them.

While the NATO campaign did result in the end of the Yugoslav wars, their decision to intervene in Kosovo was extremely controversial. It was a rare, if not unique, time when a group of states have entered a country purely on the basis of ‘humanitarian intervention.’ NATO went into Kosovo, when no NATO countries were threatened, without UN authorisation, in order to end the human rights abuses which were being perpetrated there. The intervention was not requested by the state itself, and could not be claimed under the UN Charter’s Article 51 right to self-defence.

It is considered to be an example of the use of strategic air attacks to successfully end humanitarian crises, however it raised issues as to the importance of state sovereignty, and the need for UN authorisation of force.