Advances in technology mean that there are now more ways than ever for people to report or identify acts of violence. More data means better information and hopefully better-designed interventions. These technologies are no longer the preserve of rich and powerful governments. Now anyone with an internet connection or a smart phone can contribute. If not quite a revolution, it is at least power to the people.

But what do these changes mean for those seeking to reduce global armed violence?

In February 2011, with the security situation in Libya deteriorating and with no UN presence on the ground, the United Nations Office for the Coordination of Humanitarian Affairs (UN OCHA) reached out to a community of online activists and volunteers including the Standby Volunteer Task Force, the Humanitarian OpenStreetMap and Crisis Commons.

Although OCHA had little intelligence emerging from official channels in the country, there was considerable information being shared from within Libya via social media including Twitter, Facebook, Flickr and YouTube. Using these resources, along with increasing mainstream media coverage, online volunteers monitored, aggregated, verified and mapped the situation in Syria.

After another request from OCHA the community began to map which organisations provided humanitarian assistance and what they were offering.

Initially, access to the map was private but a public version of the map was launched which displayed the same information with a 24 hour delay.

Responsibility for the mapping was finally handed over to OCHA in March once they had established a presence on the ground.

In total, 250 tech-savvy volunteers worked on the project thousands of miles from what was happening on the ground. Many more people in Libya put their lives at risk to make sure the world knew what horrors were being inflicted there.

In a meeting to discuss the lessons that could be learned from the process of maintaining the Libya Crisis Map, Brendan McDonald, the Chief of Information Services at OCHA, said:

The project benefitted from the free and open-source Ushahidi platform that allows information to be easily uploaded and mapped in a way which anyone is able to interact with. Ushahidi means “testimony” in Swahili. It was developed in 2008 to map reports of violence following the election in Kenya. 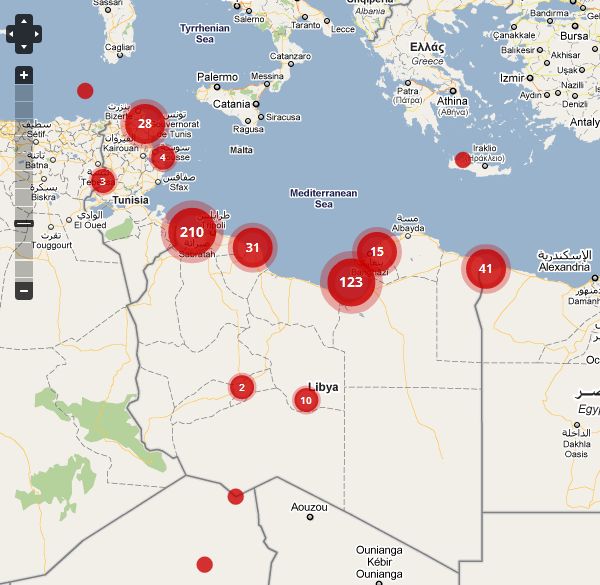 AOAV uses Ushahidi in our work with the Liberian Armed Violence Observatory to publish reports of violence there collected from police reports, hospitals and the media.

However, while distilling the noise of the crowd into an accurate picture is an extremely useful tool we should still show some caution. Data extracted in this way is only as reliable as the crowd which it is sourced from. It is possible for a group or individual to “poison” data by creating false reports. Both sides of the conflict in Libya were accused of inflating casualty figures. Hearing rumours is not equal to understanding them.

The increased access to camera and film technology, often in the shape of smartphones, has provided a new insight into violence. Videos posted online by eyewitnesses and combatants in Syria are frequently used by mainstream western media who feel the situation is too perilous to send in reporters.

Footage from the frontline is nothing new. The novelty is in the quantity of information emerging and the way that it is accessible to world audience. The public no longer obtain their news through the lens of a news editor. They are able to piece together a picture from a much broader range of information. This creates a niche not just for citizen journalists, but also citizen analysts.

Eliot Higgins runs the Brown Moses blog devoted to the conflict in Syria and press freedom in the UK. Based in Leicester, thousands of miles from Syria, and with no background of working in country, Higgins has become one of the most respected commentators on the conflict. He pours over thousands of videos to identify the different weapons in use there. AOAV has worked with Higgins to identify and profile Syria’s Dirty Dozen, twelve of the worst explosive weapons in use in the conflict.

The Brown Moses blog was one of the first identify the use of cluster munitions by Syrian government forces. His recent posts include using video stills of a tail fin to identify the largest incendiary bomb used by the Syrian air force in the conflict so far. His work has been featured by the New York Times and CNN, and referenced by NGOs like Human Rights Watch.

Again though, information from these volunteer weapons analysts comes with some caveats. Thousands of people poured over CCTV footage of the bombing at the Boston Marathon this year in an attempt to identify the culprit – without any success. The whole process was described as a kind of “racist Where’s Wally” by the New Statesman. Video stills were combed by users of the site Reddit looking for individuals who matched the profile of a terrorist bomber.  Their insights were picked up by traditional media and the New York Post even featured a wrongly identified suspect on its front page.

It is also important not to overstate the ubiquity of these amateur conflict videos. Much of the world still does not have the ability to take and upload photos and video. There is not yet a stream of iPhone films documenting violence in the Central African Republic or South Sudan. Access to such technology can depend on age, gender and geography. We should be careful not to allow some conflicts or groups to become ghettoised and neglected because they are unable to film and upload their suffering onto YouTube.

Only a few decades ago, technology like satellite imagery was confined to the world’s richest military powers. Those days are over. Organisations like the Satellite Sentinel Project and Human Rights Watch now have access to surveillance technology better than what the superpowers used during the Cold War.

Satellite images have been used as indicators of troop build-ups, indiscriminate attacks on cities and of forced displacement. They have even been used to point to potential mass graves.

In June, Human Rights Watch showed the total destruction of villages in Central Darfur.  In the same month, Satellite Sentinel showed the presence of troops in the agreed demilitarized zone between Sudan and South Sudan. 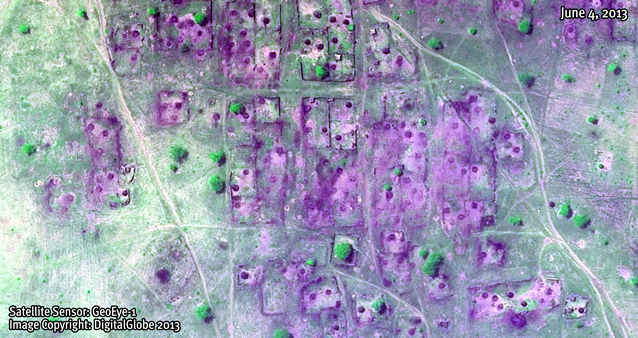 There are now discussions on how the United Nations, NGOs and the International Criminal Court could use drone technology, offering greater clarity and real-time images, to document human rights abuses. In December the UN Mission in Democratic Republic of Congo deployed surveillance drones to monitor rebel activity on the country’s borders.

“Imagine if we could watch in high definition with a bird’s-eye view. A drone would let us count demonstrators, gun barrels and pools of blood.” (Andrew Stobo Sniderman and Mark Hanis co-founders of the Genocide Intervention Network)

Access to this technology increases the watchdog powers of civil society. This is particularly true in more repressive countries that attempt to prevent reports of abuses reaching the outside world through strict controls on internet access.

There’s an App for that

As well as assisting with broad monitoring  of conflict, technology can be used by individuals to summon assistance directly.

In Lebanon, a new app called “Way to Safety” has been developed which allows people to report the sound of gunfire. Recordings are submitted to a central database where the type of weapon is identified and, based on other user reports, which direction it is coming from. The whole process takes only 30 seconds.

The “Way to Safety” is particularly useful in a country where gunfire is often used as a form of celebration. But the app is still some way from completion, and requests to the Lebanese Ministry of Defence to create a database of different weapons discharges have been knocked back.

On the other side of the world, a town near Buenos Aires  is offering victims of domestic violence an electronic device with a panic button, known as the “Dospositivo de Alerta para Mujeres Agredidas” (the Alarm Device for Battered Women).

By pushing a button the victim will activate an alarm at the city’s monitoring centre which will show an exact location. The nearest police car in the areas will be notified and sent to intervene.

At the same time, the microphone in the device is switched on and records audio of the incident.

The technology comes on the back of reports by NGOs which found an increase in domestic violence attacks after a court issues a restraining order. These devices can help protect a vulnerable group of people.

Empowering more people to report armed violence and having access to all this information will not necessarily lead to a less violent world. There is a danger of creating a watchdog with a million eyes but no teeth. It is important that the world learns of ongoing and preventable abuses. Outrage is an important means for leveraging action. However, seeing and knowing is just the first step. Governments, police and others must respond.

AOAV is committed to counting the cost of armed violence. Technology which helps with this process is to be welcomed, but it is only a starting point. It will take much more for it to serve as a basis for change.