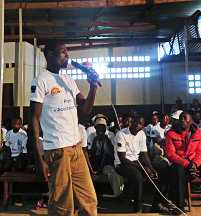 Arthemon Nyandwi,  is a 32-year-old FNL ex-combatant and participant in AOAV’s vulnerable youth project in Burundi. AOAV, in partnership with the National Ex-combatants and Victims Network (CEDAC), train peer support workers to provide psychosocial support to vulnerable youth, former combatants, people with disabilities and women in Burundi. This is his story.

“I was a National Forces of Liberation (FNL in French) combatant for over six years. For three years I used to go to school in the morning and at night I’d join the FNL group near our hill. I was useful for them because as a pupil I could provide them with information about military bases and other information in the community. One day when I took part of an ambush on the road and my classmate Chantal was among the victims. We took off her clothes and we hit the others. Eventually we let them go. 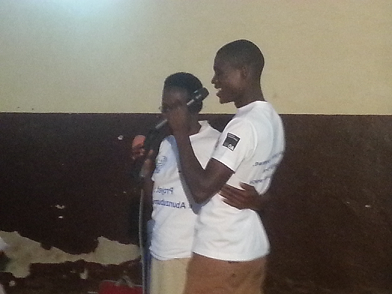 Arthemon and Chantal after public reconciliation

I had to leave school and for many years after the FNL demobilization in 2008, Chantal and I used to pass each other in the community, but we still didn’t talk. I was so surprised and felt embarrassed when I found that we had been selected, both Chantal and I, as beneficiaries of the Abunzubumwe Project and that we would be in the same group – meeting each other three days per week. We did not talk to each other during the first few days.  Little by little with the discussions in the group on themes like non-violent communication and “How to learn about our own history” and other psychosocial support activities, I decided to ask Chantal to forgive me for what I had done to her in the past.  I am grateful to CEDAC for this project which has given us an opportunity for reconciliation. I am also confident that I can have access to a loan in our group which will help me to start my own business as a butcher.”