In 2005 the first democratic elections took place in Burundi after a long and devastating civil war.  The election period was marked by violence and political unrest, involving violence between youth supporting the ruling CNDD-FDD party and those supporting the opposition. Widespread youth poverty and unemployment were the main factors pushing youth to take part in violence.

AOAV and its partners are joining efforts to reduce the vulnerability of youth to manipulation and improve social cohesion in order to prevent a repeat of the violence during the 2015 elections. The project focuses on men and women between the ages of 18 and 35 who are ex-combatants, affiliated to political parties and other youth who suffered from the past civil war who will participate in psycho-social support, income generating activities and dialogue events. 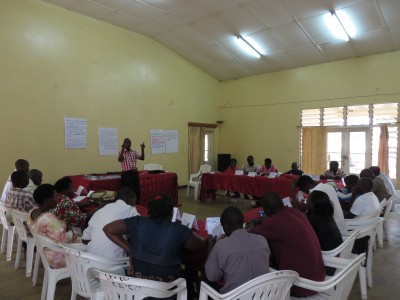 Twenty peer-support workers and two facilitators were trained over a period of four weeks in conflict resolution, violence prevention, non-violent communication, gender-based violence (GBV), as well as a methodology to form saving and internal lending groups and entrepreneurship. These Peer Support workers are now prepared to support and guide their peers in the community.

A community leader pointed out, “in the past months, security prevailed in our village Sororezo but recently tensions have escalated between youth affiliated to political parties, perhaps this is due to the fact that we are approaching the election period. Now that this project has been implemented, we think that it will help them a lot and be useful for the whole community”.

On June 30th, a community event was held to kick-off Project Abunzubumwe in Mutimbuzi and Kanyosha Districts of Bujumbura Rural. The event brought together several local authorities, religious leaders and civil society leaders during which the peer-support workers informed community youth about the project.

Presenting the PSWs to the community

Seven days later, 500 youth have been selected, of which 109 are ex-combatants, 322 members are members of political youth leagues, and the remaining 69 are vulnerable members of the community, including those with disabilities and orphans.

This project is made possible by the generous support of the Norwegian Government.