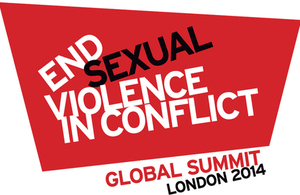 As William Hague and Angelina Jolie officially opened the Global Summit to End Sexual Violence in Conflict last week, they delivered a number of key messages. William Hague told watching media, the public, and civil society members, that impunity must end, and that there must be no ‘safe havens’ for perpetrators. We were told that funding to stop sexual violence must be increased, that the stigma must be shifted from the survivors to the perpetrators, and that survivors must be at the forefront of all policies and action moving forward. The following three days were to provide an opportunity for developing key action plans in order to implement these messages.

Four days later however, at the closing plenary, these very same messages were told to watching delegates. Instead of including the promised concrete action plans, government representatives repeated over and again the same rhetoric. The rhetoric which we had all heard before the Summit even began, and that which we heard throughout expert discussions and ministerial meetings.

The phrase that we need ‘less talk and more action’ was repeated on numerous occasions throughout the Summit. It was an unprecedented opportunity for action. But this opportunity was missed. Why?

The Summit included government representatives from over 120 countries, over 1,000 experts, faith leaders, and other representatives. It was promised to be an opportunity for inclusive debate involving individuals and groups from around the world. Yet the overall atmosphere of discussions was exclusivity. Expert discussion, which took place on the second day of the Summit, were largely not open to NGOs and those who work on the front lines directly with victims of sexual violence. They took place a full two floors above the hall in which NGOs were holding public events, talks, information sessions and workshops.

The expert discussions themselves were extremely useful, allowing detailed discussion on some of the problems surrounding ending sexual violence in conflict and the identifying of gaps and opportunities for collaboration. They provided an opportunity to discuss aspects of sexual violence in conflict which are not often discussed. In a number of sessions experts worked together alongside survivors to develop key recommendations to take to ministers the following day. However, the exclusion of those NGOs present at the Fringe events meant a missed opportunity for those working in the field to play a more significant role in the development of recommendations. As it was, they were left in the side lines, an oversight which will undoubtedly have a negative impact on moving this cause forward.

Nevertheless, at the end of the day of expert discussions, a number of recommendations were developed, some of which included concrete action points to inform ministerial discussions which would take place the next day.

However, these action points did not appear to play a significant role in ministerial discussions. The experts taking part in the Summit were not able to ‘take part’ in these discussions, and we were left to watch government representatives make statement after statement on sexual violence in conflict. Ministerial discussions did not result in the recommendations or action points which experts hoped they might, instead we mainly heard the same messages being repeated over and again. We can only hope that some real, substantive discussions were taking place in smaller groups around the Summit.

One of the most impactful aspects of the Summit was the few times where survivors themselves were given a platform to tell their stories. These truly awful stories moved entire rooms to tears, and certainly should be all that governments need to hear to actually act to end sexual violence. However, the participation of survivors was not truly at the centre of the Summit’s focus. While survivors were present at various important stages of the Summit, such as the launch of the new Protocol, they were somewhat overshadowed by the presence of high profile individuals such as Angelina Jolie. Government representatives have promised that survivor participation will be key as this agenda is moved forward. If they are serious about this survivors will have to play a much more central role than they were allowed to play at the Summit.

Lots of talk, but no meaningful action

At the start of the Summit we were told by William Hague that the key action areas were:

These messages were reiterated time and time again during the course of the four days. And while NGOs, civil society, and other experts discussed key action points in order to implement these messages, such action points did not seem to be taken up by government representatives.

At the closing plenary, videos were shown of government ministers across the globe pledging their support for the campaign, and outlining what actions they would take to support it. Out of all of the pledges only Australia, Somalia, Finland and Germany pledged any sort of key actions. All other countries stated their support for the campaign in general, without promising any concrete action. It was a slightly bitter tasting end to a week in which all we had heard was that governments across the globe were willing to support the campaign at all costs, and were dedicated to stopping sexual violence in conflict.

It is easy to pick at the negative aspects of such a Summit, however we must not forget the positives. Civil society and NGOs had a great opportunity to talk to each other and figure out ways in which we could work together in the future. The Fringe events, which were open to the public, gave a real opportunity for meaningful discussions, and brought issues which were otherwise largely ignored into the picture. They allowed international organisations to tell each other exactly what they were doing on the ground in countries such as South Sudan and Uganda, giving a real opportunity to exchange ideas on what really works to help victims. Truly inspirational people, such as Dr Mukwege, the only doctor performing surgeries on victims of violent rape in the DRC, spoke to groups of survivors, experts and members of the public. It was evident at these events that hundreds of people are truly passionate about working to end sexual violence. These people, who work at the front lines of the crisis, should have played a more central role in the rest of the Summit.

The Summit also allowed experts and government personnel to clarify the main areas of action. While the same messages were repeated over and again, this has ensured that there can be no doubt about the focus areas. It should not be forgotten that an unprecedented number of people were brought together last week. There certainly is the desire to stop sexual violence in conflict, the hundreds of people in attendance is testament to this.

One of the most frustrating aspects of the Summit was the continuous praise for the organisations who work with victims and survivors, and those individuals working on the front lines of conflicts where sexual violence is endemic. The praise itself was well placed, but praise without any follow up action is meaningless. Local organisations, civil society groups, and international organisations simply do not have the funding to do what needs to be done. These organisations need support from governments in the form of funding to enable them to continue their work.

The continued talk at the Summit must now be transformed into government action. Part of this action must be an increase in funding to organisations working to end sexual violence, and to organisations working with victims and survivors. Without such action, and such funding, it is impossible to see how the international community can finally end sexual violence in conflict. Political will seems to exist. We now must see action.