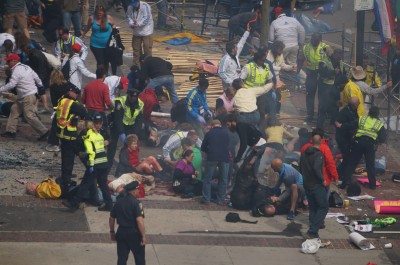 The scene of the 2013 Boston Marathon bombing, minutes after two homemade IEDs exploded

The use of explosive weapons causes death, destruction, and catastrophic physical injuries across the globe. The vast majority of the casualties of these weapons are civilians. Weapons like improvised explosive devices (IEDs) kill and physically injure thousands of people annually. But it is crucial that we recognise that the use of these weapons also causes tremendous psychological harm.

Witnessing horrific violence and seeing the bloody aftermath can lead to psychological trauma and can impact upon psychosocial well-being. Conditions such as Post Traumatic Stress Disorder (PTSD) have been associated with soldiers in conflict zones but can equally impact civilians going about their daily lives who are suddenly faced with appalling tragedy. The risk of PTSD is increased further when victims are unprepared for the event or powerless to prevent it. PTSD, and other mental health issues, can impact individuals’ abilities to continue on with their everyday lives, their jobs, and their relationships, and can continue to affect them for years after the incident. A number of international treaties, like the Convention on Cluster Munitions, recognise victims as those who suffer psychological and emotional harm as well as physical injury, yet it is rarely acknowledged post-incident that such a category of victim exists. When it is acknowledged, it often appears to be as an afterthought.

The 2013 Boston Marathon bombing was a devastating incident, yet it provides an example of the importance of ensuring that psychosocial trauma is recognised as a harm resulting from explosive weapon use. On the 15th April 2013, three people were killed and over 260 physically injured when two homemade bombs were detonated near the finish line of the Marathon. The Boston community came together in a multitude of ways to support those who had been physically injured, providing financial, psychological, and community-based support. Public officials and the media spoke extensively about the physical injuries caused by the bombings, and their impact on survivors.

However, the coverage of the bombings in the media and the way in which some public officials spoke of the survivors effectively ignored those whose mental health was impacted. People who witnessed the bombings and the aftermath experienced psychological injuries due to what they experienced. Witnesses experienced depression, anxiety, panic attacks, hyper vigilance and other symptoms of psychological trauma. These symptoms can have a huge impact, affecting people’s jobs, relationships, and abilities to lead a normal life. Yet there has been little public acknowledgment that this, much larger, group of victims existed. Time and time again those who controlled the story, including media personalities, celebrities, and officials, classified victims as only those who had been killed or physically injured. Any discussions of mental health issues were principally related to the mental health of people with physical injuries and the families of those killed.

Failure to fully acknowledge that such a category of victim exists ignores a significant impact of the use of explosive weapons. It does not recognise that people’s lives can be affected, in the longer or shorter term, by mental health issues because of what they witnessed. This is a disservice to the public for a number of reasons. Primarily, a failure to speak openly about mental health issues perpetuates the stigma around mental health injuries, which can make individuals feel like invisible victims. It also hides an important aspect of harm from the general public, and from those who may be feeling mental health impacts themselves.

Failing to openly include those who suffer from psychological trauma when speaking of those injured by explosive weapons can make survivors feel like what they are feeling and experiencing is wrong. It makes it less likely that people realise that in fact they are having a normal reaction to an abnormal event. A focus only on physical injuries can make those suffering from mental health issues feel they have no right to seek help and then feel guilty when they do. It also adds to the perception, for the public and the victims themselves, that mental injuries are not ‘real’ injuries.

These invisible injuries cannot stay invisible. If they do, an entire group of victims will go on feeling stigmatised, unable to, or unwilling to seek the help that they need. We fail in our obligations to assist the victims of armed violence if we do not fully recognise and respond to the psychological impacts as much as the physical.

“The first bomb exploded across the street from me. I saw it explode. I heard it. I watched people running away from the blast. The scene was a jumble of shattered glass and shattered people. After I got home, I could still smell the bomb in my clothes and hair. But I didn’t realize that I was a victim.

That realization was a difficult step. The media and public officials rarely spoke of those of us with psychological injuries. So, I thought that the only real victims were those killed or with physical injuries. Whatever I was feeling must be abnormal and irrelevant. Soon I began to believe that I should just get over it. Except, I couldn’t.

The most frightening symptom: intrusive thoughts. Sitting in the balcony at the opera one evening shortly after the bombing, the entire theater exploded in my mind. The room was filled with smoke, the chandelier crashed down on the audience, and everyone around me was bloody and injured. I knew it wasn’t really happening. But I didn’t understand what was happening.

Then there was the heart-stopping fear whenever I smelled something similar to the bomb or heard an unexpected loud noise. And isolation from the fact that I was harmed by this event, but that the community did not recognize it. It was a lonely feeling.

Not long after the bombing, I started seeing a trauma counselor, who helped me understand what I was experiencing and learn how to cope. And I write and talk about my experience as an invisible victim, to help others understand that there were more than 260 injuries that day. Many, many more members of our community were harmed. We suffered our injuries in private, under the societal stigma that what we were feeling wasn’t real and didn’t matter.”

To read AOAV’s full report on the support provided to the victims of the 2013 Boston bombing, please read ‘Blood on the Streets of Boston.’