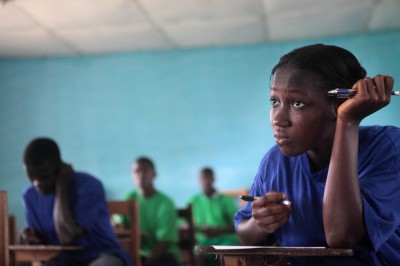 Student at AOAV’s training programme for ex-combatants in Liberia

For over a decade at the end of the 20th century, Liberia suffered a succession of violent armed conflicts which claimed between 150,000 and 250,000 lives and displaced an estimated 1.5 million people. The United Nations estimates that 40,000 women and girls were raped and more than 38,000 children are thought to have been used by the multiple armed groups, most infamously in Charles Taylor’s Small Boys Units.

Since peace was declared in 2003, Liberia has been on the long road to recovery and there was an early recognition that a national healing process was needed. The psychological effects of this prolonged violence and brutality on the people of Liberia was undoubtedly staggering, but in the aftermath of war it was an area neglected, not only for victims and survivors, but crucially for those who had taken part in the fighting. It may sound unjust, but in Liberia’s case ignoring the psychological rehabilitation of former combatants, many of whom only took up arms as a last resort to defend their communities and arguably making them also victims of war, would only serve to further complicate Liberia’s recovery.

In a feasibility study conducted in Liberia in 2006, AOAV found that several thousand young men and women, many of whom were former combatants who had not participated in the official UN-led Disarmament, Demobilisation, Rehabilitation and Reintegration (DDRR) process, continued to live and work in their war-time command structures, gaining income through illicit resource extraction. Most had not returned to their home communities to resume normal life, effectively left out of Liberia’s peaceful future, and in a prime position to remobilise if the opportunity arose. 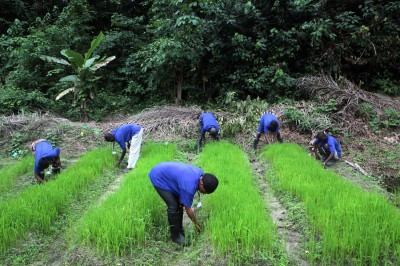 In partnership with the Government of Liberia and the UK government’s Department for International Development (DFID), AOAV designed an intensive residential agricultural training and psychosocial support programme which was implemented between 2007 and mid-2014[1], and eventually expanded to also include youth vulnerable to engaging in armed violence. Providing ex-combatants and vulnerable youth with legal and sustainable livelihood opportunities through agricultural training would mean they were less likely to resort to risky, illicit livelihoods, and contribute to the economic recovery of the country. You can read more about this element of the project here.

Crucially, alongside intensive agricultural training, the programme also addressed the psychosocial challenges faced by these former combatants. Many had been with their armed factions for years, some had been children when they were recruited, meaning normal life and socialisation skills, from literacy and numeracy to listening and communication, were lost or never acquired in the first place. AOAV’s training module, developed with a local organisation, the National Ex-Combatant Peace Building Initiatives (NEPI), led trainees through a curriculum specifically designed for their needs and included both group and individual counselling sessions. Topics in the curriculum included effective communication, perceptions, understanding economic and social conflict, breaking the cycle of violence, and understanding trauma. Life skills such as leadership and conflict resolution, designed to help trainees become useful citizens and responsible employees, were also included. 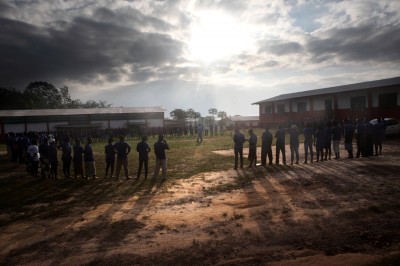 The combination of vocational and life skills training was a key factor in the success of the programme. Observation by trained AOAV counsellors, as well as interviews conducted during an external evaluation by Innovations for Poverty Action (IPA), revealed that many of the participants suffered from some form of trauma or post-traumatic stress disorder (PTSD) due to wartime experiences and had not yet adjusted to normal civilian life within a community. They often had trouble living with others peacefully, or perceived themselves to be stigmatised due to their status as ex-combatants. Allowing these participants to determine their own identities, lifestyles, and futures is one of the first steps to changing anti-social behaviour. Graduates that have fully reintegrated socially with community members, particularly those that formed agricultural collectives, have found the most economic success as well. Moving past trauma enables them to think and plan for the future, for their businesses, their families and their communities, and most importantly contribute to a Liberia which has a peaceful and prosperous future.

[1] The UN Peacebuilding Fund, the Government of the Federal Republic of Germany, the Liberian Ministry of Youth and Sports, and the World Bank have also funded AOAV’s Agricultural Training Programme.

You can read the full report on AOAV’s Agricultural Training Programme in Liberia here.

This programme in Liberia has now finished but AOAV needs your help to implement similar initiatives elsewhere. Please donate to help us continue our work with people affected by the traumas of armed violence.