The suffering caused by armed violence in Latin America is, unfortunately, not new. The Geneva Declaration on Armed Violence and Development estimates “one third of lethal violence globally is committed in the Americas. Twenty-two American countries have rates higher than the global average, and seven of these have extremely high homicide rates of more than 30 per 100,000 population.” 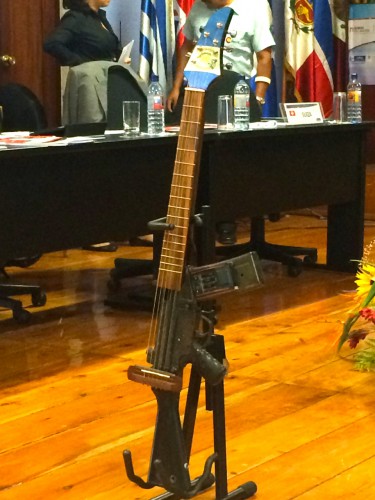 A symbol of peace: the ‘escopetarra’, a guitar made from a rifle.

To discuss this issue and share good practices in addressing it, over 130 individuals representing governments, international and regional organisations, civil society, and the private sector from the region, met in Antigua, Guatemala, from 28 to 30 April 2014. Participants took the opportunity to review implementation of the Geneva Declaration, and to explore ways towards integrating armed violence prevention and reduction into national and international development processes, including the post-2015 development agenda.

On 27 April, in collaboration with the Global Alliance on Armed Violence, AOAV held a basic training and preparatory meeting for civil society participants. The workshop looked at: where armed violence data can be found, and challenges to accessing such data; how to compile and understand data on armed violence; and ways evidence can inform action to reduce armed violence.

It was highlighted that, contrary to other regions, there is no direct correlation in Latin America between unemployment and violence rates. More unemployment does not mean more violence. Experts also showed that sometimes the link between development and armed violence is not that straight forward, either. Diego Fleitas of the Asociación para Políticas Públicas said “whilst generally inequalities in the last years have gone down regionally, homicides continue to go up”.

These findings informed a set of recommendations, “10 Recommendations from Civil Society to Reduce Armed Violence in the Americas”, that were presented to states during the official meeting. These recommendations called on states to fulfil Geneva Declaration commitments, implement other supporting instruments, and advance a post-2015 development agenda which strengthens the rule of law and promotes peaceful and non-violent societies.

Issues covered include: victims and survivors, gender, tools of violence, measuring and monitoring armed violence and the post-2015 development agenda.

Concerning the issue of measuring and monitoring armed violence, civil society called on “actors in the region to harmonise the collection of national data and ensure public accessibility of the data, alongside appropriate training and sharing of best practice”. They also stressed the need for “increased data disaggregation […] to measure the impacts of violence on women, men, children and all communities particularly affected by armed violence.”

During the official meeting, AOAV also held a side event to present a new initiative promoting tools that allow national and local governments to collect information on insecurity and armed violence in order to inform action. The initiative was welcomed by participants, although it was stressed that as long as countries in the region persist in using different definitions of crime and violence, using this data to inform action will be a challenge. This is particularly true in countries where definitions of homicides, for example, differ between various sources. 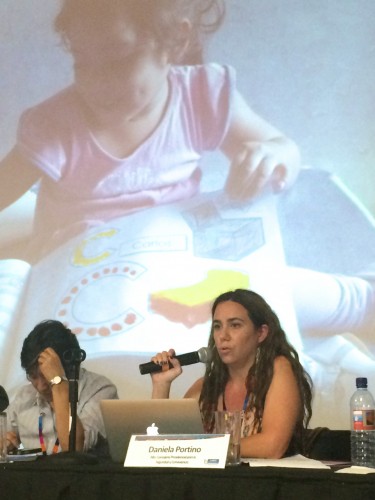 Dr. Daniela L. Portino González presents the outcomes of research on the access to justice for victims of armed violence in El Salvador and Argentina.

The story of Alicia is just one example of the challenges faced by victims and their families. Alicia is a young girl partly paralysed by a stray bullet in San Salvador. She was taken to hospital where she received treatment. A police officer came to report the crime, but that was the first and last time the El Salvadorian authorities addressed her case. After she left the hospital, no one has been in touch with the family to provide rehabilitation services, nor any other type of support. The bullet that almost killed Alicia was given to her mother instead of being used as evidence to investigate the case. This says it all.

This total lack of support from the state is concerning. Alicia’s father, as often in these cases, decided to take revenge. He is now sentenced to 30 years in prison. Alicia’s mother has taken up numerous jobs to finance the rehabilitation of her daughter and support her other children. The state is nowhere to be seen. And the mother fears that if they do take an interest, it will only be to take away her children because she has to leave them on their own in order to go to work.

Alicia’s case is not isolated. Alex Galvez, himself a survivor of gun violence, now leading the Transitions Foundation in Guatemala, stressed the need for states in the region to stop the stigmatisation against victims of violence and to seriously take on their responsibilities.

“States should remember,” he said, “that they are not doing us a favour. They have an obligation towards survivors of armed violence and their families.”

Daniela Portino, from the Asociación para Políticas Públicas, added: “there is enough legislation to cover for the rights of victims, what is missing is strong implementation”.

She also called on states to ensure that “physical and psychological reintegration is provided also once the victim leaves hospital”. In her view “to reach out to victims often leaving in remote areas, there is a need to decentralise the access to justice to local level”.

The next review conference of the Geneva Declaration will take place in Nairobi, Kenya, from 28 to 30 May. Further meetings will take place later in the year in Switzerland, the Philippines and Morocco.