This film, released today by one of AOAV’s partners Save the Children, asks us to imagine if the reality of life for the children of Syria was the reality for children in London.

Children in Syria who were leading happy, healthy and safe lives have seen them dashed by the conflict, which broke out in early 2011. As of August 2013 more than 11,000 children had been killed in the conflict according to analysis carried out by Oxford Research Group.

Explosive weapons were by far the biggest killers of children in Syria. Of the 10,586 child deaths where a cause was known, explosive weapons like mortars, rockets and artillery shells were responsible for 71% (7,557). Air-dropped bombs killed more than 2,000 children alone.

Child deaths from explosive violence continue daily in Syria. Last month, AOAV recorded 44 child deaths from a series of ‘barrel-bomb’ strikes in the northern city of Aleppo. Some estimates from organisations with representatives on the ground suggest that the toll is even higher than that.

“This video serves as a powerful reminder of the toll that the war in Syria has taken on the country’s youngest and most vulnerable civilians”, said AOAV’s Head of Weapons Dr Jacob Parakilas. “And a wildly disproportionate amount of that toll has come from the indiscriminate use of explosive weapons in populated areas.”

The reason these weapons in particular have such a devastating impact for children is that explosive weapons affect an area rather than just an individual. Bombs, shells and rockets alike all project blast and fragmentation from their point of detonation. Unlike blades, blunt tools, or even firearms, these weapons affect anyone who happens to be in their area of impact. When these weapons are used in populated areas civilians, including children, are invariably among the casualties.

The impact of explosive weapons on children isn’t just about the devastating casualty toll.

“Explosive weapons kill and injure children, but as this video portrays, they also have a long-lasting psychological impact”, said Kimberly Brown, Conflict Policy Adviser at Save the Children. “Children who live under bombing or shelling can suffer nightmares, flashbacks, and often lose family members, which compounds these difficulties. Explosive weapons have wide-ranging impacts on children – in Syria the destruction of schools, homes and vital services will have massive consequences for children in the country for many years to come.”

Action on Armed Violence, together with Save the Children, is a member of the International Network on Explosive Weapons (INEW). We believe that explosive weapons should not be used in populated areas and that urgent action is needed to prevent human suffering at the hands of this pattern of violence.

AOAV’s own data on the impact of explosive weapons worldwide shows Syria to be one of the most dangerous places in which to grow up. Syria accounted for more than a quarter of the child casualties recorded by AOAV in 2012. However, in 2011 and 2012 children were killed or injured by an explosive weapon in no less than 41 countries.

Explosive weapons and children: The Cost 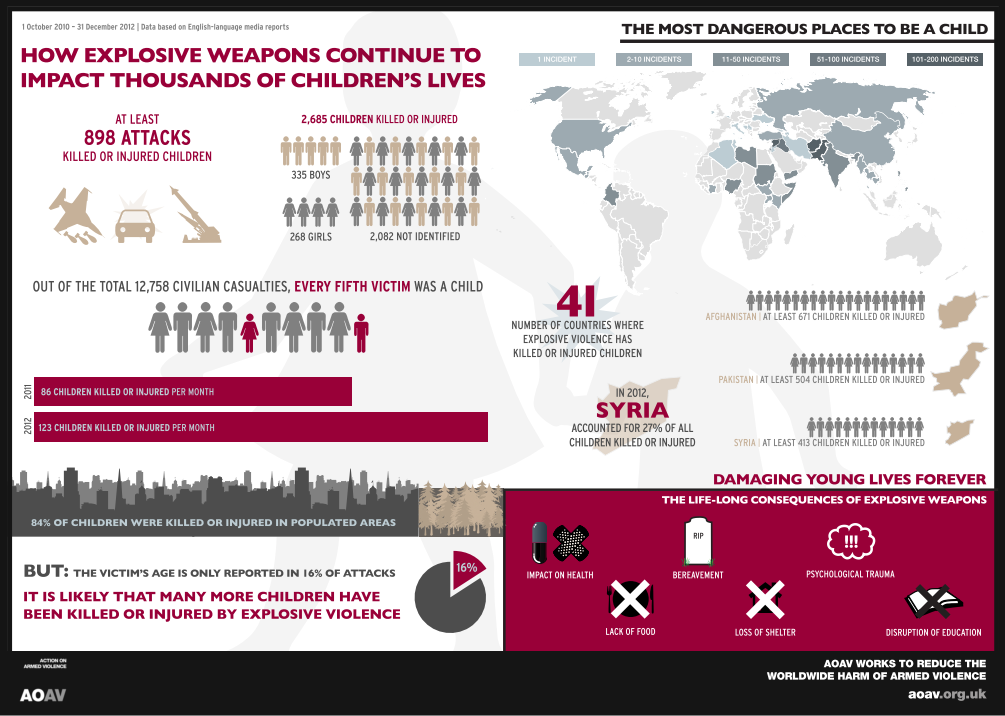