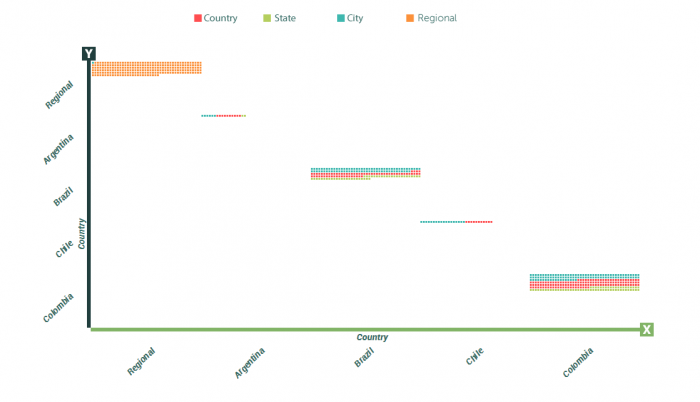 An example of the database. Each box provides different information on measures taken in response to violence and insecurity

In recent years the international community has increasingly been aware of the impact of armed violence and insecurity in Latin America and the Caribbean. Countries such as Venezuela, El Salvador and Honduras witness far too many people die violently every day. 4 of the 5 countries with the highest rates of violent deaths in the world are in this region. Although the media often focuses on particularly gruesome violent acts committed by organised criminal gangs, common crime and sexual violence are as much part of the problem as other more ‘prominent’ violent acts.

What is less known about crime and violence is the measures taken to address and reduce such violence. The Brazilian Igarapé Institute, in collaboration with the World Bank, and InsightCrime have developed the first citizen security database that sheds a light on what people are doing to respond to insecurity and armed violence.

This database is the largest regional collection that has ever been gathered of past and ongoing public security and safety programmes. The database features over 1,300 citizen security interventions from 19 countries between 1998 and 2013. It draws on existing information from major institutions such as the Inter-American Development Bank, United Nations Development Programme, World Bank and the Organisation of American States.

What it offers is quite unique. It allows you to look at general trends and patterns for all projects across time and space, but also to look specifically at objectives, duration, budget, and coverage of the interventions. You can search for interventions by strategy and country, or look at which donors support which strategies, and where.

It shows, for example, that 36% of all interventions in 2008 took place in Colombia, or that in 2013 the vast majority of bilateral and multilateral funding went towards the support of ‘management improvement’ interventions, which covers activities such as the reforming of security sector institutions and strengthening the justice system. Although much has been written about the challenges of state violence, between 2003 and 2013 only one intervention was recorded as actually dealing with this problem.

What has the potential to be even more exciting for practitioners is a yet-to-be-developed feature: ‘the traffic light’. This system will monitor ‘what works’ and ‘what does not work’. Robert Muggah, research director and programme coordinator for violence reduction at the Igarapé Institute, told AOAV that “a preliminary sample (10%) of the database reveals just 7% of all 1,350 interventions are backed by a robust assessment registering positive impact. More than 57% have no supporting evaluations at all.”

In a world where data and evaluation of impact are increasingly important, much more needs to be done to ensure that interventions in this sector have a proven impact on reducing crime and insecurity. “While international bodies contemplate assistance strategies to help local partners deal with these issues, they are facing their own financial constraints. In our view, this makes targeted interventions based on sound evidence even more crucial than ever. Data visualizations such as the citizen security dashboard are a first step to transparency in the region´s security agenda”, says Muggah.

Action on Armed Violence applauds the roll out of this useful and practical tool and encourages states and civil society in equal measure to use it to inform funding and focus.