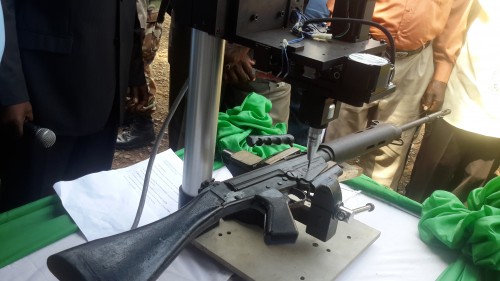 An FAL rifle is marked during the programme launch

Last week marked the launch of the Sierra Leone Weapons Marking and Computerisation Programme, which is managed by the Sierra Leone National Commission on Small Arms (SLeNCSA) and supported by Action on Armed Violence (AOAV). Hon. Joseph B. Dauda, Minister of Internal Affairs, led the event which showcased a marking demonstration by newly trained members of the Republic of Sierra Leone Armed Forces (RSLAF) and the Sierra Leone Police (SLP).

Following Sierra Leone’s ratification of the ECOWAS Convention on Small Arms and Light Weapons, Their Ammunition and Other Related Materials, SLeNCSA has been responsible for ensuring effective and proper coordination of all small arms control interventions. The 2012 Arms and Ammunition Act marked a significant step towards the realisation of the Convention, calling for the establishment of a National Arms Register and providing a means for privately held guns to become legally licensed and registered.

Since the Act was signed into law, AOAV has been working with SLeNCSA to develop an action plan for its implementation, including completing the marking of all government and publically held-weapons.  The weapons marking and computerisation programme – the first of its kind in Sierra Leone – aims to mark all state and civilian owned weapons with identifying registration codes, which will aid law enforcement agencies investigating gun related incidents. It will also ensure that civilians who produce or purchase weapons are able to do so legally. 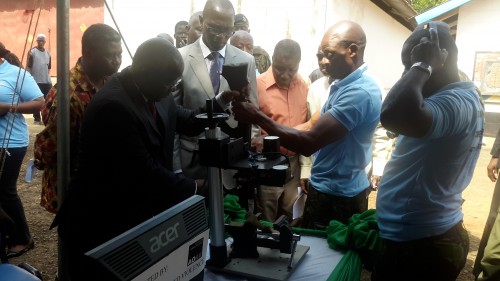 The marking process involves a systematic embossment of unique, identifiable information including the ECOWAS logo, Sierra Leone country code, security agency code, weapons serial number, and date of marking on all firearms belonging to RSLAF, SLP, and civilians. This information is then added to a newly created National Arms Register.In 2013, AOAV provided two marking machines to the Government of Sierra Leone and sponsored one representative from the RSLAF and the SLP respectively to travel to the United States to receive training in their operation.  Upon their return, these officers trained ten additional personnel in the use of the machines in preparation for the launch of the national marking programme.

At the event, Hon. Dauda lauded the contribution of AOAV in helping ensure a safe and peaceful Sierra Leone through its support to the marking programme. According to the Minister, the programme has put Sierra Leone well ahead of most other ECOWAS member states in implementation of the Convention on Small Arms and Light Weapons. During the ceremony, AOAV presented SLeNCSA with additional spare parts for the marking machines and two diesel generators to ensure the long-term success of the weapons marking programme.  Also present at the launch were the Minister of Defence, leading members of Parliament, including the Chairman of the Presidential and Defence Committee, several high ranking security sector officials, leaders from international organisations, civil society, and the media. 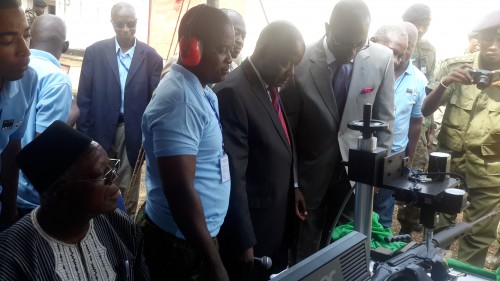 AOAV has been working in Sierra Leone since 2011 to reduce the impact of armed violence. AOAV’s support to the Weapons Marking and Computerisation Programme will help Sierra Leone consolidate the progress it has made in reducing the availability of illegal weapons, arresting and prosecuting armed violence perpetrators, and improving the security and quality of life of all its citizens.