Syrian government forces have been using a powerful new rocket launcher not previously seen in the conflict. Video evidence broken on the Brown Moses blog shows the remnants of rockets that have been traced back to the BM-30 ‘Smerch’.

Smerch means ‘Tornado’ in Russia, where the weapon is made. It is a multiple-launch rocket system and it has been used in Syria this month to fire cluster munitions into towns and villages.

Videos of sub-munitions in Hama province have been identified by Human Rights Watch as a cluster munition type that had been as-yet undocumented in Syria. This new proof of further cluster bomb use in Syria is dismaying. As a member of the Cluster Munitions Coalition (CMC), AOAV strongly condemns the use of this banned weapon type.

But the BM-30 Smerch is a powerful and dangerous weapon system whether its rockets are carrying cluster munitions or not.  Each launcher can fire a salvo of twelve massive rockets, of differing varieties, but all capable of causing death, damage and injury to civilians.

So how does it compare to some of the other explosive weapons in Syria?

The Smerch system is the largest multiple rocket launcher in use in Syria. The rockets it fires have a 300mm diameter, making them among the largest unguided artillery rockets in the world.

Each rocket is 7.6m long, and weighs 800kg. That is three times as big, and far, far heavier, than the only other ground-launched cluster munition in Syria, the Sakr rocket. AOAV has previously featured Sakr rockets as part of an investigation into Syria’s Dirty Dozen.

The Syrian government and rebel forces have both used multiple launch rocket systems in the conflict. But this system dwarfs the others in its size and power. It can fire its munitions at targets between 20 and 70 km away. This is as far as the FROG-7, one of the ‘Scud-like’ ballistic missiles that have obliterated entire neighbourhoods in past attacks. 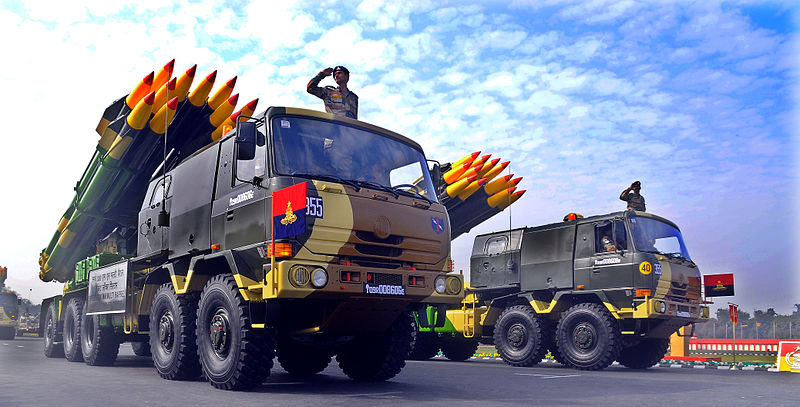 These rockets are slightly more accurate than the older systems that have been used in Syria up until now. Smerch rockets have a stabilisation system but not a guidance package, as they are designed to attack areas rather than specific points.

The haphazard nature of the weapon is significantly enhanced when the system is additionally packed with cluster munitions. The inherent lack of discrimination is the reason why so many countries have rushed to ban cluster bombs.

But if a full salvo of twelve Smerch rockets were fired at maximum range, half of them would be expected to land outside an area of 121m around the target.[i] The Smerch system fires its full salvo of 12 rockets in just 38 seconds and is ready to fire again in less than half-an-hour. In a populated area the effect would be catastrophic, regardless of the warhead type.

“A unique solution to your problems”

The Smerch is produced by Russia’s Federal State Unitary Enterprise “Splav.” Splav are also the manufacturers of the notorious BM-21 Grad system which has been widely-used by both Syrian government and rebel forces.

On its website, Splav describes the Smerch as “a unique solution to your problems.” Its boasts of ensuring “battlefield mass destruction” are oddly juxtaposed with adverts for far more mundane items like oxygen cylinders and fire extinguishers.

But mass destruction is what multiple rocket launchers are designed to do. They are not meant for populated areas, and should not be used in such locations, where they put civilians at immense risk.

The appearance of BM-30 Smerch systems in Syria has come as a surprise to arms experts and analysts. Not much is known about how they came to be in the country.

According to SIPRI Russia have exported the Smerch to Algeria, India, Kuwait, Turkmenistan, UAE and Venezuela. It is also believed to be in the stockpiles of several former Soviet states. However, no public record exists of it being exported to Syria.

Syrian government forces are assumed to be behind the recent attacks in Hama province. As Human Rights Watch has pointed out, it is highly unlikely that rebel forces would have the training necessary to use such a system. Equally significantly, amid a sea of propaganda videos that show-off rebel firepower, no video evidence has surfaced that demonstrates possession of the Smerch system among the various opposition groups.

The emergence of such a weapon in this conflict is also consistent with a pattern over the last three years. From direct-fire tank rounds to heavy artillery to ballistic missiles, government forces have deployed increasingly large and powerful weapon types as the conflict has escalated.

One other pattern has stayed consistent throughout the conflict, and is not limited to any one party or weapon. That is the relentless use of heavy explosive weapons in populated areas, and the resulting high proportion of civilian casualties to which much of the world’s media seems sadly inured. Just yesterday at least 18 people, including children, were killed when the Syrian air force dropped bombs on a school in Daraa province. AOAV has found that more than 90% of the casualties of explosive violence in Syria are civilians. These are weapons whose area-effect makes them an enormous threat to civilians, and the deployment of the BM-30 Smerch in recent weeks is a sad sign that this threat is only set to continue.

[i] This is the weapon’s Circular Error Probable (CEP), according to information made available in IHS Jane’s, “Ammunition Handbook”, 2013-2014. Circular Error Probable is defined by Jane’s as “the measure of accuracy of a gun/ammunition combination, typically expressed as the diameter of a circle within which 50 per cent of the projectiles will fall at any given range.”