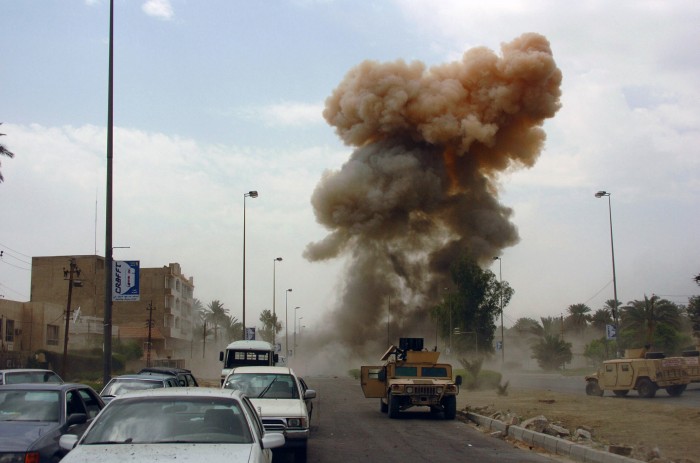 A car bomb explodes in Iraq

It is difficult to appreciate the impact of IED attacks when faced with large numbers of incidents and casualties. It can be easier to understand the extent of such violence when a shorter time period is considered. 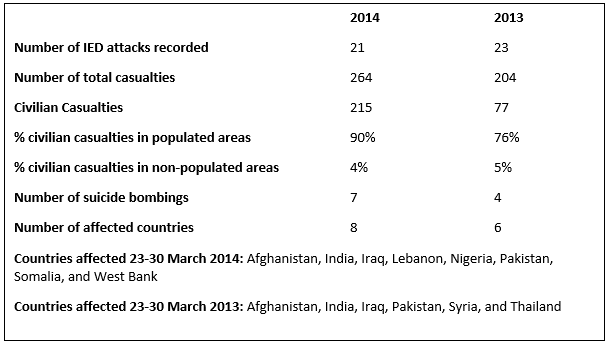 Data on IED attacks recorded by AOAV occurring between 23-30 March 2014, as compared with the same week in 2013

Snapshot of an incident – 25 March

A suicide bomber kills six civilians at a traditional Buzkashi match, a sport in which horse-mounted players drag a goat carcass towards a goal, in Kunduz, Afghanistan. The bomb occurred in the Northern Kunduz province, a province which marks Afghan New Year, which falls next week, with an annual buzkashi festival.

The most lethal incident on the 27 March 2014 resulted in 40 civilian casualties. 12 were killed when a car bomb exploded in a commercial street in Baghdad, and 28 were injured.

On the 28 March an Afghan child was killed by a suicide bomber attack on the Roots of Peace landmine charity guesthouse. Gunmen subsequently stormed the charity’s office, leading to the deaths of one civilian and one armed actor. 4 civilians were injured, as were 4 armed actors.

A day later, on the 29 March, an eight year old girl was killed by an IED planted under a pushcart in Pakistan. 17 civilians, 8 of whom were children, were injured.

AOAV collects data on the global casualties of IED attacks and suicide bombings by monitoring English-language media reports. Civilians are overwhelmingly the victims of these attacks, which are repeated almost daily. Hundreds of civilians become casualties of IED attacks every single week. These attacks destroy infrastructure and kill and injure men, women and children. AOAV is working to count the true cost of these attacks and explore methods by which their horrific impacts can be mitigated.