Nduwayezu Jean Claude is 30 years old and lives in Mutimbuzi District, Burundi.  He is amongst the 500 beneficiaries who were selected for the project “Abunzubumwe” in association with CEDAC, AEOEP and AOAV providing psychosocial support for former combatants and vulnerable youth.  This is his story. 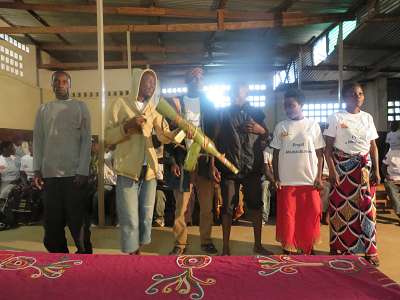 Project participants in a theatrical sketch demonstrating a confrontation between two rebel movements.

“From 2001 to 2004 one of the units of the National Forces of Liberation (FNL) was stationed in our neighbourhood and children were forcefully enrolled to help them collect firewood and fetch water. As the security situation worsened I dropped out of primary school and joined the FNL until the signature of the ceasefire agreements with the Burundian government in 2006. Often times, as I was informed about the plans of attack to certain households, I made sure I warned villagers so that they could flee their homes. Even though I was a member of this rebel movement, the thought of killing filled me with apprehension.  When I came back to my community in 2007 relations were not good because suspicions remained, especially between members of different rebel groups.

For me, AOAV’s project is thus of big importance because it allowed us to share our personal experiences with members of our groups, to heal our internal wounds, to learn how to listen to others, and understand certain behaviours. We exchange ideas, we acquired new knowledge on certain principles of tolerance and democracy but we are also delighted to now have an easy access to credit through the Saving and Internal Lending groups. Most importantly, we do not stand glaring at each other anymore; we know each other better now and we can work together.”