Home / AOAV: all our reports / Libya

The last few weeks has seen heavy clashes erupt in eastern Libya, particularly in and around the flashpoint city of Benghazi. Forces affiliated with a renegade former general Khalifa Haftar have been bombing militia camps with air strikes and artillery after declaring an offensive against Islamist militias in the country on 16 May.

On 2 June at least 23 people died as residential areas came under attack from mortars, artillery and the notorious GRAD rockets, as well as air strikes. GRAD rockets were widely-used during the 2011 conflict. Each unguided is three metres long, and they can be fired in barrages of as many as 40, covering a wide area. They are unguided weapons which are completely inappropriate for use in or near populated areas.

Civilians have come under attack from air and ground in these escalating clashes. On 1 June an airstrike targeting an armed base incidentally hit a university building nearby, wounding two people and causing massive damage to the facility.

“While both sides may be intending to attack what they consider to be military objectives, ordinary residents increasingly are bearing the brunt of attacks with weapons that lack precision,” said Hassiba Hadj Sahraoui, Middle East and North Africa Deputy Director at Amnesty International.

“Libyans are increasingly paying the price of reckless attacks with heavy weapons in residential areas that kill and injure people who are not posing an immediate threat, including those trying to treat the injured.”

The recent clashes in eastern Libya are deeply concerning. Explosive weapons affect an area with blast, heat and fragmentation. Their use in populated areas by militias, factions and irregular forces puts civilians at grave risk of death and injury, as well as threatening the security of their properties and livelihoods. AOAV is a founding member of the International Network on Explosive Weapons (INEW), which calls for immediate action to reduce the humanitarian suffering from explosive weapon use in populated areas. AOAV joins the calls from Amnesty International for all parties to fighting in Libya to show restraint in their use of explosive force.

AOAV maps the global use of explosive weapons such as those used in eastern Libya, and monitors their impacts as reported in English-language media sources. Between 2011-2013, Libya has been one of the most-affected countries. AOAV has recorded 3,826 casualties from explosive violence in Libya since January 2011, 71% of whom were reported to be civilians. 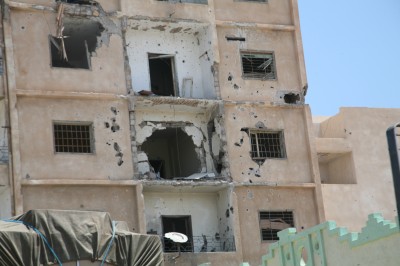 Building damaged by shelling in Misrata, May 2012 (AOAV/Simon Conway)

The vast majority of civilian casualties were caused in the conflict in 2011 in which residential districts in the cities of Misrata and Sirte in particular were decimated by heavy explosive weapon use. However, in both 2012 and 2013 civilians continued to be caught in the cross-fire as heavily-armed militias carried out attacks with artillery and rocket launchers. Libya is awash with weapons, which are a threat to civilians both in the country and in its neighbours. It is also facing a new threat from improvised explosive devices, with the country’s first suicide bombing taking place last year.

In 2012 AOAV carried out field-research in Libya, exploring the fallout from explosive violence in the 2011 conflict.