The Sudanese Air Force has begun to drop powerful parachute-retarded bombs among its own civilian population, activists report. 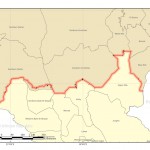 Civilians living in the Nuba Mountains in the central state of South Kordofan have come under periodic bombardment in recent years as the government carries out a campaign of aerial attacks against rebels in the province. Reports of a new type of bomb mark a concerning sign of escalation in this campaign.

The FAB 500 SHN is a huge free-fall bomb, made distinctive by a parachute which slows the flight of the munition as it drops. These Russian-made bombs, which have also been seen in Syria, weigh 518kg, and almost half of this weight is its high-explosive content. Each bomb has a destructive area as big as 1,500 square metres.

Nuba Reports, a network of on-the-ground reporters in the Nuba Mountains in South Kordofan state, say that the first time these bombs were used in Sudan was on 17 November 2013.

Two children were killed in the village of Tabanya when a bomb fell on the market. Video filmed at the site of the attack shows what appears to be a trail of burnt parachute fabric trailing from a crater.

Since this attack at least 20 parachute bombs are said to have been dropped in Sudan.

The parachute allows the FAB 500 SHN to fall more slowly than its other aerial bombs. It means that the pilot can fly lower over a target, theoretically providing some measure of greater control. However, FABs remain free-fall bombs, which are completely unguided once launched. It is impossible to accurately target these bombs, especially within populated areas.

The wide-area effect of these FAB bombs is not the only reason why their deployment in Sudan is a threat to civilians.

“Nuba civilians have learned to recognise the sound and timing of a typical bomb. This helps them protect themselves during attacks.” Nuba Reports said. “But the parachute bombs do not make noise when deployed and fall for longer. In both Buram attacks many civilians left their shelters when they did not hear the bomb, thinking it was safe. If the bombing again becomes unpredictable, it could force many civilians back into the caves, fearing for their lives.”

Sudan has only been able to drop these deadly devices in the last few months. Belarus last year reportedly transferred 12 second-hand Su-24 [Sukhoi] attack aircraft to Sudan. For the most part, aerial bombings in Sudan are carried out using Antonov AN-26 cargo planes. These are not designed to drop bombs, and so munitions are manually rolled out of the back of planes as they pass over civilian areas. These attacks are an ongoing threat to civilians. On 15 January, three civilians were reportedly killed in an aerial bombing from an Antonov, in the Blue Nile state that borders South Sudan.

While clashes in neighbouring South Sudan continue to draw the world’s eye, the Sudanese Air Force appears to be ramping-up a campaign of aerial bombing within its own borders, and among its own population. This is a campaign that has not only killed and injured civilians, seemingly indiscriminately, but has forced massive displacement and destruction of livelihoods. If more powerful weaponry is brought to bear in a region that has already seen extensive explosive attacks, then it will be the civilian population that will suffer the consequences.