The following article appeared in The Telegraph on 15 March 2014.

As new research shows 90 per cent of explosive weapons casualties are civilian, the Telegraph highlights the deadliest weapons used in the conflict. 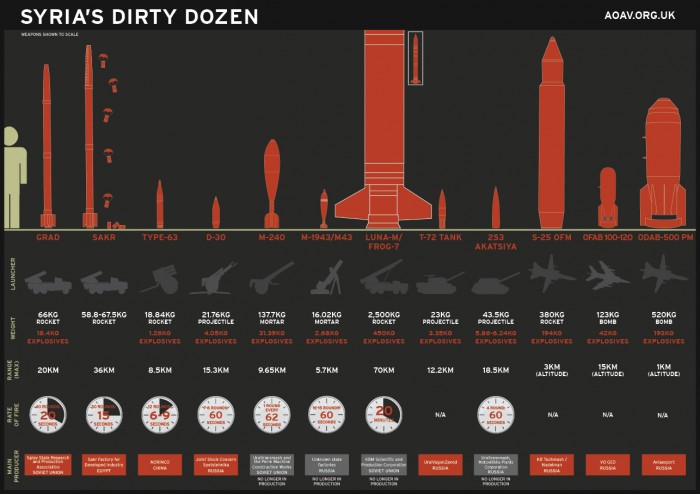 Syria volunteered to hand over its chemical weapons after a nerve gas attack which killed hundreds in the Damascus district of Ghouta caused international outcry.

On September 14 last year the United States and Russia announced an agreement that would lead to the elimination of the country’s stockpiles by mid-2014. To date, they have handed over less than 30 per per cent.

However, data given to the Telegraph by the charity Action On Armed Violence (AOAV), which monitors reports of attacks in Syria, reveals the shocking impact that conventional weapons are having on civilians.

Nearly 90 per cent of all explosive weapons casualties in Syria are civilian, according to their figures. This is higher than the total for the rest of the world.

Sakr rockets Made in Egypt, they are unique as the only ground-launched cluster bomb in Syria. As the Sakr flies through the air it releases as many as 100 explosive submunitions, which scatter across an extremely wide area. 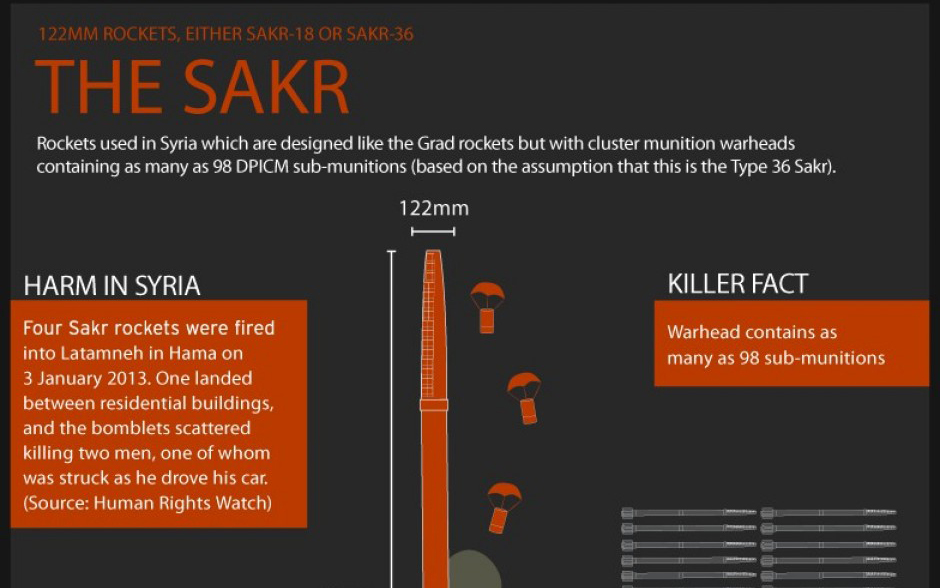 ODAB 500 PM This air-dropped bomb has a 30m-radius effective blast zone against infantry in the open. 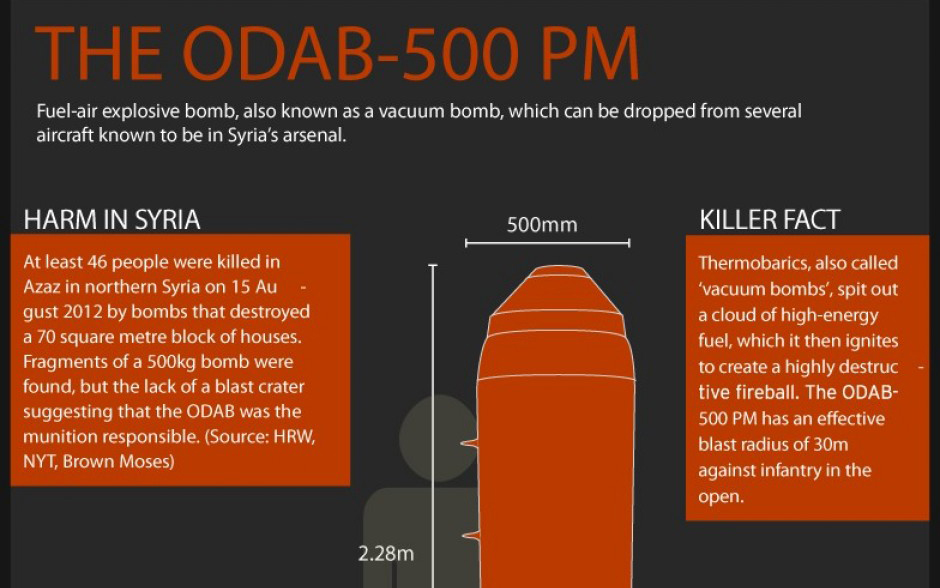 Improvised Explosive Devices (IEDs) are increasingly being used in Syria and are responsible for 28 per cent of casualties.

Half of all civilian deaths recorded by AOAV were in 2012 – the second year of the conflict, with nearly 9,000 people dying from explosives devices. The worst month was February, when the bombardment of Homs began, where 690 civilians were killed by heavy explosives devices, such as the biggest mortar in the world – the M-240.

The areas which recorded the largest civilian deaths from these weapons, which are used in attacks by both forces loyal to President Bashar al-Assad and opposition fighters, were in the country’s second second, Aleppo (24.1 per cent), followed by the capital Damascus (24 per cent) and Homs (17 per cent).

The three strategic cities have become the frontline in the battle for control. The opposition has retained control over large parts of Aleppo, however rebel groups have become increasingly fractured with the emergence of Islamist and extremist factions.

So-called barrel-bombing is a relatively recent phenomenon and exclusively used by the Syrian air force. The bombs are typically made by filling barrels with high-powered explosives which are often then filled with shrapnel and dropped from the air to cause maximum damage.

The charity’s research shows two-thirds of barrel bomb attacks have taken place in the last four months. There were just five such attacks reported in the first year of fighting, compared to 33 in the last year.

Suicide attacks, which were unheard of in the early years of the conflict, are also now on the rise.

One of the last reported attacks was thought to have been carried out by Briton Abdul Waheed Majeed last month while fighting with the al-Qaeda-linked group Jabhat al-Nusra, making him the first British person to die in a “martyrdom mission” in Syria.

The group released a video which appeared to show a truck, laden with explosives, driven by Majeed into the gates of Aleppo Central Prison before exploding.

A spokesman for the charity which compiled the data said: “Explosive weapons like rockets and mortars should never be used in populated areas where civilians are gathered. In Syria however, both sides have now, for years, bombed civilian towns and villages on a near-daily basis. It’s no surprise that these are the weapons more responsible than any other for civilian deaths.

“And even if the war were to end today, explosive weapons have made it so there’s nothing left for many of the people who have fled.”