Today marks three years since the first anti-government protests broke out in Syria.

The war that followed has claimed well over 100,000 lives, forced millions from their homes, and reduced ancient cities to rubble.

The way in which explosive weapons have been used in Syria has shaped the dynamics of this relentless conflict. The history of the war in Syria, and the suffering of its civilians, is inextricably bound up in the steady escalation of explosive violence. 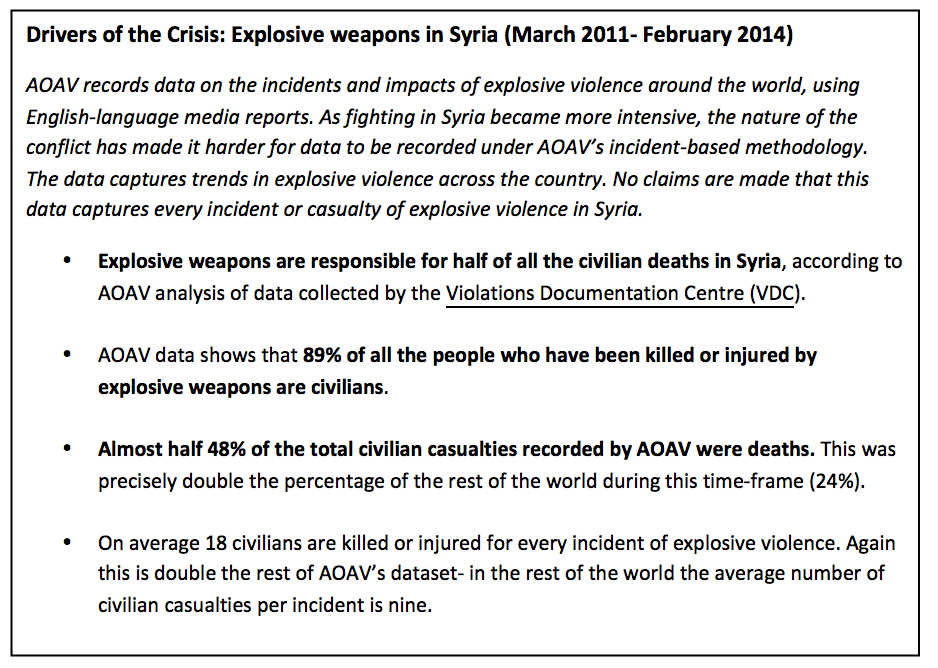 Using a sledgehammer to crack a nut

Explosive weapons were first used in Syria in April 2011, when tanks were deployed to quash protests in the southern city of Daraa. At this point, early in the confrontations, protests were still predominately peaceful. Most states implicitly recognise that explosive weapons have no place in domestic law enforcement, so for a government to roll out tanks and heavy artillery among its own population is a clear sign of crisis.

These early deployments came at the height of the Arab Spring when many Middle East and North African regimes were facing similar challenges to their rules. Those that most-violently repressed the protests of their own citizens, Libya and Syria, were the two to descend most rapidly into all-out conflict.

In Syria such heavy-handedness was an early flash-point. The use of heavy explosive weapons against its own population in Daraa caused international outrage, and triggered an escalation in violence that slowly spread across the country.

Responding in kind? The rise of improvised explosive devices (IEDs)

On 23 December 2011, 44 people were killed when two car bombs exploded outside security buildings in the centre of the capital city Damascus. The devices, reportedly detonated by suicide bombers, were the first IED attacks in the country to cause large numbers of civilian casualties.

The attacks marked the beginning of an evident escalation in the frequency and intensity of non-state use of explosive weapons. Casualties from IEDs in Syria were first recorded by AOAV in July 2011, but these incidents remained rare and had only a limited impact on civilians for a time. After the December bombings in Damascus however, IEDs became more common in populated areas, and civilians were increasingly among the casualties.

By the third year of the conflict (March 2013- February 2014), 11% of all suicide bombs globally recorded by AOAV took place in Syria.

Hail in Homs: the start of mass barrages

During February 2012, regime forces launched unprecedented barrages of mortars, rockets and artillery shells into densely-populated residential areas. More than 200 civilians were killed overnight on 3-4 February in the city of Homs. On the morning of 21 February alone, at least 250 shells and rockets struck the district of Baba Amr.

It was the first time that multiple rocket launchers were used in Syria. These weapons, like the notorious Grad rocket, have since been widely-deployed in the conflict by both government forces and rebels. They are designed to attack a wide-area and are totally inappropriate for use in a populated area. The Grad, for instance, can fire 40 unguided rockets in less than 20 seconds. Its name, appropriately, means ‘Hail’ in Russian.

AOAV recorded 690 civilian deaths in Homs in February 2012. Two-thirds of the casualties from explosive violence in the city that month were fatalities. The ratio of deaths is far higher than the global or even Syrian average ratio, and attests to the intensity of the bombardment, which would have additionally prevented many of the injured from reaching treatment.

The bombardment of Homs was condemned unequivocally, but rather than remaining an appalling but isolated example, it became the model for future violence. Cities and towns across Syria came under widespread barrages with long-range and indirect-fire explosive weapons, often as a prelude to ground offensives. This pattern of explosive violence has been one of the most devastating for civilians.

Ground-launched explosive weapons are responsible for 45% of the casualties recorded by AOAV in Syria.

Death from the skies: Air strikes in Aleppo

The conflict in Syria has been constantly defined by the introduction of new and progressively more powerful explosive weapons.

Nowhere is this seen more clearly than in the use of air-power. The first casualties from aerial bombings were seen in August 2012, 16 months after clashes began. Once air strikes were introduced, however, progressively larger and more destructive bombs and rockets were steadily rolled out. This included cluster munitions, which are banned under international law due to their indiscriminate impact and legacy of long-term harm.

As soon as aerial bombings began to be used, civilians were killed and injured in large numbers in incidents largely taking place in populated areas like the northern city of Aleppo. Over the course of the Syrian conflict, air-dropped bombs have been among the most destructive weapons. AOAV have documented an average of 15 civilian deaths in every air-dropped incident in Syria.

The use of ‘barrel bombs’ is frequently claimed in Syria, though it is often impossible to determine whether these were conventional aircraft bombs or makeshift weapons. These weapons, basically oil drums stuffed with fuel, explosives, and chunks of jagged metal, were first seen causing casualties as early as September 2012. However, two-thirds (66%) of all barrel bomb attacks in Syria that were recorded by AOAV took place in the last four months. 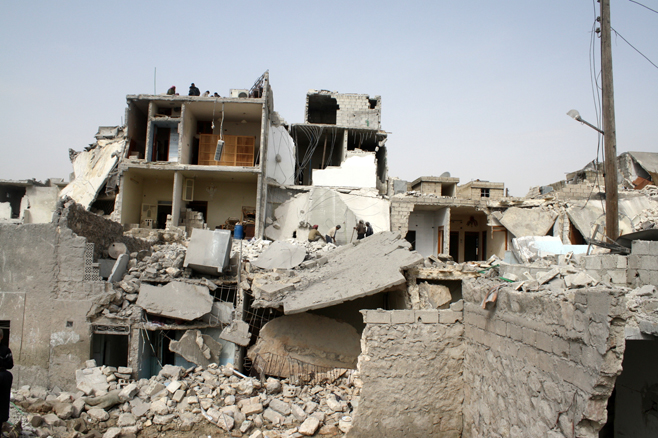 Ballistic missiles are hugely powerful, long-range weapons. It wasn’t until February 2013 that these weapons were known to have caused civilian casualties in Syria.

The use of such enormously-destructive missiles in populated areas was a new and terrifying threat to civilians in Syria who already faced daily attacks with explosive weapons. These are weapons are entirely indiscriminate and their large blast radius means they could never be used in a populated area in such a way that distinguishes between civilians and armed actors.

More than 140 civilians died in just four ballistic missile attacks on the city of Aleppo in February 2013—attacks which reduced entire neighbourhoods to rubble.

The average of 49 civilian casualties recorded in every ballistic missile attack in Syria is the highest for any explosive weapon type in the country.

Conclusion: The burden of bombings

The story of civilian suffering in Syria is connected with the use of heavy explosive weapons, more so than any other weapon group. For all the furore that met the horrific chemical weapons attacks in the eastern Ghouta district, and in spite of the ubiquity of firearms like the AK-47, the fact remains that explosive weapons are the major driver of civilian loss.

AOAV’s analysis of the dataset of the Violations Documentation Center (VDC), a Syrian casualty-counting group has seen that explosive weapons are responsible for 51% of all the civilian deaths in the Syrian conflict. As of 10 March 2014 the VDC had recorded 33,520 civilian deaths from the assorted bombs, shells the rockets that have daily pummelled towns and cities into dust.

Beyond the physical deaths and injuries that these weapons have caused, explosive weapons affect entire areas. Homes demolished. Vital sewage drains and water pipes ruined. Markets, schools, and hospitals destroyed. The true impact of explosive weapons for civilians can barely be quantified.

Three years in, the link between civilian suffering and the use of explosive weapons in populated areas has been shown starkly in Syria’s terrible conflict.

Three years in, there are few signs that the steady escalation in explosive violence will slow or reverse.