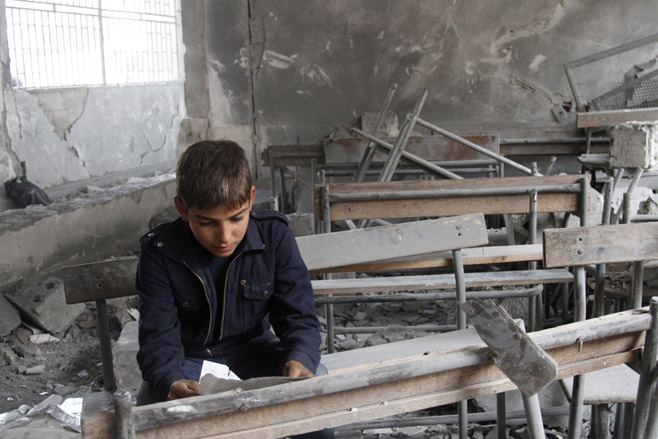 As many as 25 children have been killed today in Syria by a barrel bomb that fell through the roof of their school.

The young students at the Ein Jalout School in the northern city of Aleppo had gathered to exhibit their drawings when the bomb fell.

It comes just a day after mortars thundered into the Badr al-Din al-Hussein technical institute in Damascus, killing twelve civilians.

“Every day, across Syria, children who are simply trying to go about their everyday lives are being killed and maimed by indiscriminate attack on populated areas,” said Maria Calivis, UNICEF’s Regional Director.

Explosive weapons, like barrel bombs and mortars, affect an area. When they are used in populated areas they are capable of causing large numbers of civilian casualties. Schools come under threat from the use of weapons that are completely inaccurate, or have a massive blast radius that engulfs a wide area.

In the first three years (March 2011-2013), AOAV recorded 29 separate incidents of explosive violence in or near schools. In those attacks;

AOAV, a London-based charity, records casualties (i.e. people killed and injured) from explosive violence around the world as reported in English-language news sources. The data reflected here cannot capture the full scale of civilian suffering in Syria, but is indicative of the patterns of harm that exist when explosive weapons are used in populated areas.

In this case, AOAV’s data shows that schools in Syria are no longer the zones of peace and safety that they should represent.

And children, far, far too often, are numbered among the casualties of explosive weapons.