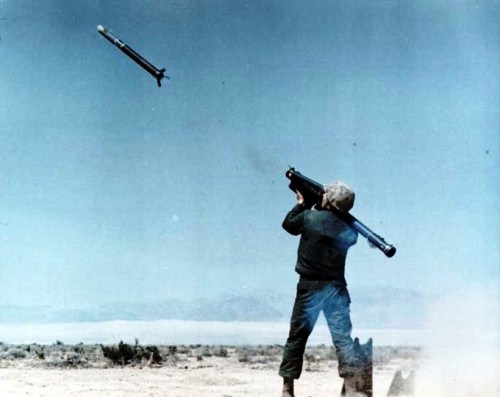 A ‘Redeye’ missile in action. The FIM-43 is a US-made MANPAD, and isn’t thought to have been the weapon used today.

The deaths of at least two airmen in a missile attack in eastern Ukraine are the first fatalities from explosive weapons. In the context of the major build-up of military forces equipped with heavy explosive weaponry along the border, this marks a potentially escalation.

This morning two Ukrainian army personnel were killed after their helicopters were shot down by pro-Russian forces. The Ukrainian government says that surface-to-air missiles were fired as the helicopters passed over the eastern city of Sloviansk, which has become the latest flashpoint in the crisis. Videos on social media claim to show the moment when the missiles were fired.

It is not clear what weapons were used to down the helicopters, nor where they came from. However they appear to be man-portable air defence missiles (MANPADS). In March, several ‘Igla’ MANPADs, a system comparable to the one used in today’s attack, were reported to have been stolen from a Ukrainian stockpile.

Today’s deaths are the first reported fatalities from explosive weapons in Ukraine. A week ago a grenade attack on a pro-government checkpoint injured seven people outside Odessa, Ukraine’s fourth-largest city.

These events are occurring amidst a massive military build-up on both sides of the border. Satellite photos and videos from the ground have shown a variety of heavy explosive weapons being moved into position, including artillery, attack aircraft and multiple-launch rocket systems such as the notorious Grad rocket that has been used to such devastating effect in Syria.

Russia and Ukraine have both deployed helicopter gunships and fighter jets capable of firing rockets and missiles at ground targets.

In March, reports emerged that Russian forces had been laying new landmines near the Crimean peninsula. Antipersonnel mines are banned under international law, and a total of 161 countries are party to the Mine Ban Treaty, including Ukraine.

AOAV has watched the steady deployment of heavy explosive weapons in the region with grave concern. At this stage these weapons have not been fired in anger and no civilians have died as a result. But their presence greatly increases the risk of death and injury to civilians. Explosive weapons pose a particular threat to civilians because they project blast and fragmentation effects around a point of detonation. When they are used in populated areas then the likelihood of unintended civilian deaths and injuries is severe and predictable.

The worst fighting in the Ukraine to date has been focused on cities and towns with large civilian populations. Sloviansk, where today’s attack took place, has a population of well over 100,000.

The use of artillery, attack aircraft or other heavy explosive weapons in densely-populated eastern Ukraine will signal a dramatic escalation that will put the civilian population in great danger. AOAV urges all parties to refrain from further deployment of explosive weapons to avoid that possibility.