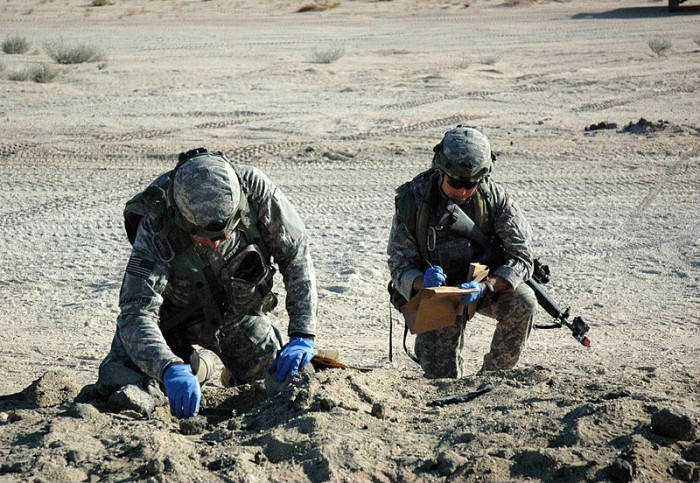 The US Defense Department’s Joint Improvised Explosive Device Defeat Organization (JIEDDO) is facing cuts that could reduce it to a third of its current size by the end of September.

The Obama administration has proposed significant defence budget cuts ahead of its planned withdrawal from Afghanistan by the end of 2014. If approved by Congress the new budget will see the army shrunk to its lowest troop levels since before World War II and a number of Navy warships removed from active duty. The Air Force’s A-10 fighter jet and the U-2 spy plane would be retired. These cuts are in part intended to protect major weapons acquisition programs like the Gerald Ford-class aircraft carriers and the F-35 Joint Strike Fighter as the US looks to move away from large counterinsurgency operations.

Amidst these cuts the planned reductions to the US’s counter-IED capabilities have, ironically, gone undetected.

JIEDDO, established in 2006, is responsible for coordinating efforts to address improvised explosive devices like roadside bombs and car bombs. As well as developing effective training techniques and ensuring troops are properly equipped, JIEDDO works to attack networks of bomb makers. To this ends it has special funding authority to rapidly respond to changes in the threats which are faced and can make acquisitions 75% faster than the regular military. Between 2006 and 2011 JIEDDO received $18 billion in funding.

Efforts to improve the protection of US troops have mostly been seen as successful, but there were some embarrassing failures, among them a device which shot lightning bolts at roadside bombs which had to be scrapped.

JIEDDO currently has around 3,000 personnel, but its director Lt. Gen. John Johnson has been instructed to reduce this to 1,000 by the end of the fiscal year and ultimately to prepare to bring the organisation’s numbers down to as low as 400.

Although JIEDDO will continue in a smaller form, it will have to shelve many of its current functions. “The key is that it be scaled to what the nation can afford,” said Johnson. It will continue to play an ongoing role in Afghanistan after the withdrawal of US troops.

“If you look at the mission statement for JIEDDO, it’s to defeat the IED as a weapon of strategic influence. Now I’m not ready to come out yet and say ‘mission accomplished,’ but if you look at the work over the last decade of war, what we have done in Iraq and what we are in the process of doing here, that is demonstratively proven.”

It is true the withdrawal of troops from Afghanistan and Iraq means that IEDs are of less immediate relevance to the US. However, much of the ‘strategic influence’ of IEDs lies in their power to kill and injure civilians as well as troops and so undermine any sense of security. Last year the UN recorded 2,890 civilians killed and injured by IEDs in Afghanistan alone. By monitoring English-language media reports, AOAV recorded a global total of 20,914 people killed and injured by IEDs in 2012 – 81% of these casualties were civilians.

It is vital that the expensively acquired lessons and technology which JIEDDO has obtained over the last decade are shared with those in other affected countries like Afghanistan, Pakistan and Nigeria who are trying to prevent and mitigate horrific IED attacks on a daily basis. JIEDDO’s support of efforts to train bomb disposal units, border police and customs officials in Pakistan are to be applauded and replicated.

Now is also good opportunity to move the discourse around IEDs from a narrow focus on military casualties to understanding the full range of humanitarian effects and to begin to recognise that the vast majority of IED casualties are civilians.