Counting the cost in Nigeria

Thousands of people have died violent deaths in Nigeria’s crisis-torn North East. Since the beginning of the insurgency by the Islamist insurgent group commonly known as Boko Haram, armed violence has killed and injured scores of civilians, insurgents and members of the security forces.

The exact human cost of the insurgency, however, is unknown. Human Rights Watch estimates that over 3600 people have been killed over the last three years. An official statement by the Chief of Army Staff in November 2012 said over 3000 had been killed up to that point in time alone.

But this is as far as the records go. The names of most victims, and the circumstances under which they died, are unaccounted for.

What exactly happened, and when and where? Who was the victim – a civilian, insurgent, or soldier? How old were they and did they leave family behind? With which weapons were they killed or injured? And as important: who said it happened – what is the source?

In Nigeria’s North East, these questions remain unanswered. But victims of armed violence also go uncounted in other states. Despite the fact that states are obliged under international law to record civilian casualties of armed conflict, publicly accessible victimisation records are scarce in Nigeria. There have been some attempts at keeping casualty counts, including by the Ministry of Defence, the Nigeria Police Force, and non governmental organisations, but data is, by and large, sparse and methodologies untransparent.

Recording casualties of armed violence is crucial. It dignifies the victims and holds perpetrators accountable. It provides a better understanding of the situation and helps target resources to curb violence.

It informs the debate with hard facts in a context characterised by rumours and conflicting stories.

NOTICAS is a reporting system that feeds details of military casualties up a notification chain. Notice of the killing of a soldier is passed from the site of the incident up to superior headquarters, before being passed to the Ministry of Defence Headquarters in Abuja.

According to an anonymous army source, this system is functional and efficient to the point that “notice arrives in headquarters within two hours of the incident”.

How the military counts civilian casualties is less clear. No information could be accessed in the course of this research, which casts some doubts over whether civilian deaths are actually recorded. According to a former general, during some incidents such as night raids, no-one counts the deaths or injuries. Dead bodies are reportedly left where they were shot, without being counted or identified.

Military casualty records are strictly confidential. They are inaccessible to both the media and to the general public, but rather serve purely as internal security assessments by the Armed Forces. Sometimes the Chief of Army Staff publicly provides overall figures but more detailed records are rarely obtainable. 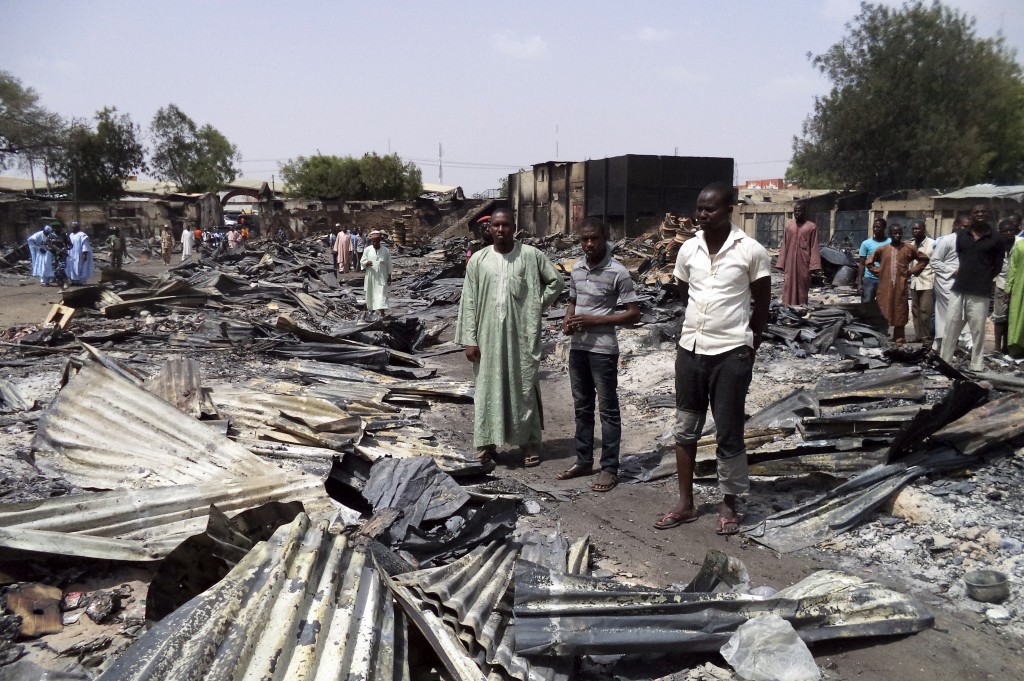 People gather around the ruins of the burnt Bama Market, which was destroyed by gunmen in an attack in April 2013 (Reuters/Afolabi Sotunde).

The Nigeria Police Force
The Nigeria Police Force is theoretically in a prime position to count deaths and injuries caused by armed violence. It has a network of close to 350,000 police officers, has police commands in every state and the mandate to protect lives and property across the whole country. The Force operates in areas of high “criminality” such as the South South, and those riddled by “conflict” such as the North East.

Even in conflict situations it is still the police who maintain the records. A killing reported to the police will be recorded as a crime. The police are also obliged to keep records of unnatural deaths in custody, including name, date and cause of death.

Compilation of police data starts at the police station. The collated data is passed to the Divisional Headquarters, then to the Command Headquarters, and finally to the Police Force’s Headquarters. The Zone Headquarters sometimes also obtains data from commands, and produces its own data, which is fed back to headquarters.

A record of a criminal event includes the date, police station/district, information on the informant/complainant/accused/witness, and details of the event. Based on this, annual returns are produced. These regularly produced summaries form the basis of the Police’s crime statistics.

The most well-known and easily available dataset is the Nigeria Police Force’s “Annual Report”. Compiled on a yearly basis, it “presents the activities and performance of the Police”. The Report provides an insight into police deaths in service, listed under the category “manpower wastage”. In 2008, for instance, the official number of police deaths was 2,309.

From a casualty recorder’s perspective, these figures are interesting, but not sufficient. The aggregated numbers say nothing about the cause of death, the incidents that lead to it, or the circumstances surrounding it. The names of the victims are also not published. This in itself would not be a problem if the details were available elsewhere. But they are not. While possible in theory, researchers often face lengthy bureaucratic obstacles when trying to obtain this information.

“The police will not tell you they don’t have data. They will create official and bureaucratic obstacles to hinder your search” says a representative of NOPRIN. Obtaining details on casualty figures in the North East, for instance, is close to impossible.

There are other problems with police statistics. It is an open secret that the police statistics suffer from serious shortfalls in resources and funding. With a chronic lack of resources, adequate recording is often not given top priority at police stations. The training of police officers in charge has also been criticised.69

There are more grey areas. Obtaining information on state-sponsored violence is one. The Nigeria Police Force is frequently accused of extrajudicial killings and other types of state-sponsored violence. No one knows how many of these killings are reflected in the statistics. Civil society organisations voice concerns that the category “armed robbers” is sometimes used to cover up extrajudicial killings.

A NOPRIN report refers to counting the number of people killed by the police as a “hopeless task”.

Besides their Annual Report, the police maintain other, less publicly accessible sources of information on casualties. One of them is the monthly appreciation of crime report, which is produced for use by police commands.

One of the most active data collectors is the Force Intelligence Bureau within the Nigeria Police Force. It prides itself on being “the only arm in the Force that provides Intelligence on Crime and National Security”. It collects, digests and disseminates information to “various police formations on a continuous basis”. Yet, since it is a system destined for internal use, little information on the sources is available.

In sum, for members of the public, obtaining national figures on deaths and injuries caused by criminality and armed robbery is possible only at the national level – at least up to 2009, although there are serious doubts about how this information is collected and compiled. Obtaining a detailed breakdown of civilian deaths and injuries, or casualties caused by state forces, is much more complicated, and obtaining information about death in conflict areas such as the North East is close to impossible.

There are more government bodies in Nigeria that count the dead and the injured. Yet in none of them could a national or regional tracking system that matches the definition of casualty recording (systematic, continuous and aiming to be comprehensive) be found. Rather than being casualty recorders themselves, these institutions are sources of information for casualty recorders.

Hospitals
Most hospitals routinely record certain pieces of information about patients who are victims of violence. In the best case, this includes the date and location of the incident, the demographics of the patient, the nature of the injury, the nature of the weapon that caused it, and the incident behind it. However, the extent to which hospital records are standardised is doubtful.

A source within the Ministry of Defense’s hospital in Abuja said “all doctors learn to use the same forms at medical school, so I would imagine everybody uses the same”.

The local hospital’s records are often stored on shelves full of paper, and are not necessarily available electronically. And, as far as this research could ascertain, there is no central body collecting these records. It is also worth pointing out that, among all illnesses treated, violence and injury are often not separately recorded. This is because, in many hospitals, no comprehensive injury and death recording systems are maintained. A pilot study implemented across five African countries pioneered a violent injury surveillance system in a hospital in Kano – but that is as systematic an approach as this review found.

Mortuaries
Mortuaries are the last destination of dead bodies before their burials. They are, by nature, important sources of casualty records. The police and army often dispose of corpses with signs of unnatural death at mortuaries. In the North East for instance, a hospital morgue in Borno receives up to 60 dead bodies a day from the army, according, to the New York Times.77

In Rivers state, which has one of the highest incidences of violence in the Niger Delta,78 the police reportedly take people killed during operations to the mortuary.79 However, civil society organisations point to the absence of systematic forensic investigations, and very limited criminal investigation. The Coroner’s laws, in place in many states of Nigeria, are not enforced. A recent study conducted in 20 states found that “all states researched had Coroner’s laws”, but that “the Coroner’s system has fallen, uniformly, into disuse”.

It is also worth noting that Muslim religious practice is to bury victims immediately after their death. Roughly half of Nigeria’s population is of Muslim faith, and this custom leaves little time to establish identity and the circumstances surrounding the death of Nigerian muslims.

Even though, like hospitals, they have the potential to keep registers invaluable for casualty recording, the records from most mortuaries are partial at best.

Others
The National Human Rights Commission runs a complaint mechanism for possible victims of human rights abuses. Reports can be submitted by victims, orally or in writing, for the NHDR to investigate alleged violations of human rights.

The Federal Ministry of Justice also holds information on death and injury. This research has not found a central mechanism collating information collected in, for instance, the courts of law. The Nigeria Prisons, similar to the Nigeria Police Force, produces regular returns on the prison situation and prison population. They pick up some of the information produced in the courts.

A note on government records
Many victims of violent crime in Nigeria do not seek help from official institutions. Some studies estimate that only 25% of crimes are reported to the police.

Records from hospitals are often incomplete, too, because victims seek treatment elsewhere or die before reaching the hospital, and because “deaths are not regularly reported to the police or health authorities”.84 This means that, even if all records of government bodies dealing with casualties were perfectly sound and transparent, they would still cover only a proportion of all incidents.

Non governmental systems
A great deal of Nigeria’s systematic and continuous casualty recording is being done by national and international non-governmental organisations.