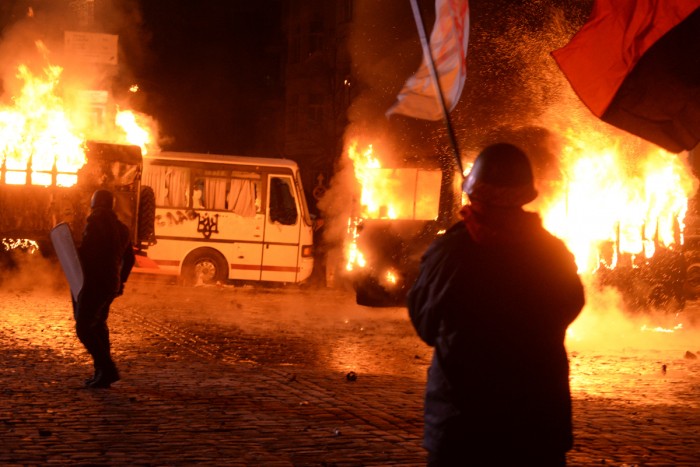 Over the last few weeks, separate large-scale protests erupted into violence in Thailand, Ukraine and Venezuela. Beyond the immediate violence and casualties, civil unrest poses a major danger of escalation into much more violence. In such charged situations, the use of certain weapons and tactics can often spiral towards uncontrollable conflict.

And yet the mechanisms by which the international community could reduce the risks of such escalation happening are inconsistent at best.

The most concerning developments thus far have taken place in Ukraine, where protests escalated into several days of armed violence in the streets of Kyiv. Nearly a hundred people were killed in the violence, which only ended when President Viktor Yanukovych was deposed and fled to Russia. Subsequently, the Russian military intervened in Crimea, leading to an ongoing standoff, though thus far without fatalities. While the intensity of the Thai protests seems to have diminished for the time being, the situation in Venezuela remains unstable and dangerous. 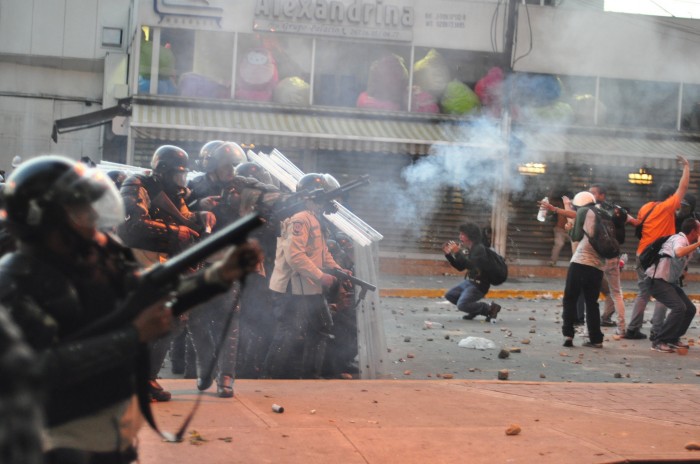 There is recent precedent for civil wars being sparked by violent repression of protests: the wars in both Syria and Libya started with government forces firing on demonstrators. Yet violent suppression can also succeed in destroying protest movements without sparking wider rebellions, as was the case in Uzbekistan in 2005 and Iran in 2009, amongst others. But the current upsurge of violent rioting has shed renewed light on how escalation of force in civil unrest can lead to uncontrolled upward spirals in violence. To understand how this can happen, AOAV briefly examines some of the weapons and tactics used in situations of civil unrest.

Molotovs, paving stones and blunt objects: The weapons of protest

Participants in civil unrest generally do not carry weapons. There is a variety of moral and strategic reasons not to, but a fair summary is that the carriage of weapons delegitimises and endangers protesters and their causes.

But once fighting has begun weapons are usually improvised from whatever materials are nearby. Maidan Square, in Ukraine, was stripped of its paving stones by protesters looking for blunt projectiles to fling at police. Improvised blunt weapons are also commonly seen in the hands of rioters: repurposed hand tools, sporting goods and pieces of wood and metal are all relatively common.

More violent riots commonly see more dangerous improvised weapons. One of the most common is the Molotov cocktail, named after WWII-era Soviet foreign minister Vyacheslav Molotov. This weapon is simply a glass bottle filled with a flammable liquid (usually gasoline) and a rag stuffed into the spout. The rag soaks up the liquid, becoming flammable but also serving as a time-delay fuse, allowing the user to throw it with some measure of safety before it explodes into a ball of flame. The Molotov’s ubiquity and dramatic appearance have given it a certain cultural cachet: for example, its use is shown in slow-motion detail in the music video for Kanye West and Jay-Z’s “No Church in the Wild.”

Increasingly, protesters are deploying their own protective gear. Photos of the Ukrainian protests are notable for the high level of protective gear carried by the Euromaidan protesters, including riot shields, helmets, gas masks and protective goggles. While some protesters have always been better-equipped than others, the ubiquity of protective gear amongst Ukrainian demonstrators shows that protest movements are learning how to increase their ability to resist while minimising aggression.

Crude as improvised weapons may be, they are capable of causing significant injury or death, even to armoured police officers. Injuries to police officers during riots are exceptionally common; in more violent disturbances (including Venezuela, Ukraine and Thailand), police officers have been killed as well – though almost always in smaller numbers than protesters.

Lethal, but less so: The weaponry of riot control

In contrast to the improvised nature of weapons used by protesters, security forces call upon a variety of specialised equipment for use in public order policing. Most common are shields and batons, which – coupled with visored helmets and protective personal armour – give riot policemen their distinctive look. 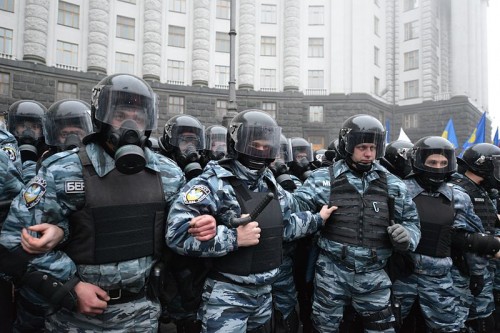 Beyond the basic equipment, specialist projectile weapons available for riot control. In earlier eras, shotguns were used; aimed at the ground in front of protesters, it was assumed that the ricocheting pellets would injure and deter protesters without killing them. Nowadays, more specialised ammunition for such weapons is available – plastic baton rounds and loads of rubberised pellets will theoretically cause temporary pain rather than dangerous injury. Other weapons are designed from the ground up to minimise lethality. But both are designated as “less-lethal” rather than nonlethal, since serious injuries and fatalities can still result.

In any case, such weapons tend to be the province of only the richest and best-equipped security forces; those with more limited budgets tend to make do with simpler tools.

Many security agencies have various other means they can call upon to control public unrest. Water cannon are generally vehicle-mounted weapons which project a stream of water at high enough velocity to people off their feet or even cause significant injury. The potential for injury means in many jurisdictions, including mainland Britain, they are not used. Similarly, various chemical agents such as tear gas and pepper spray are designed to cause discomfort, pain and incapacity without doing lasting harm, though such weapons are often used in highly problematic ways.

The extremities of armament: Firearms and explosives in riot control

The line between civil unrest and full-blown insurrection can often be seen with the use of firearms and explosives to suppress rioters. Even in jurisdictions where police are routinely armed, officers tasked with riot control almost never carry firearms. The risk that the weapons would be taken away from them or used in such a way as to exacerbate rather than calm violence is simply judged to be too high. The appearance of armed officers or military personnel in riot control situations is generally a sign that a dangerous escalation is in progress – if it has not already occurred

For some forces, such as Venezuela’s National Guard, shotguns are a riot control staple, with attendant fatalities. Ukraine’s Berkut riot police dispensed with even the pretence of attempting to avoid fatalities, utilising assault rifles and bolt-action sniper rifles on protesters towards the end of the Euromaidan protests. Such weapons are designed specifically for lethality, and surviving their impact is generally a matter of luck rather than intention.

Where firearms are a last resort in controlling unrest, the use of explosive weapons almost invariably marks the point of no return. It was the indiscriminate use of explosives on protests by the Assad regime in Syria and the Gaddafi regime in Libya which led to the wars in those countries.

Thankfully, explosive weapons appear not to have been a factor in Venezuela or Ukraine – AOAV’s monitoring of English-language news sources did not identify any use of explosives in either environment. There have been a small number of explosive attacks in Thailand during the course of the current protests, though in none of these cases were the security forces apparently responsible.

Given that protests generally involve large numbers of people clustered together, the blast radius of even relatively small explosive weapons such as hand grenades would cause vast and indiscriminate harm. If a state force chose to resort to such weaponry to disperse and disrupt public demonstrations in these countries it would send a message that the state was losing, not gaining control.

It would also be a clear message to the world that the regime in question was sacrificing its obligation to protect its citizens for short-term stability, and that worse may well follow.

Who polices the riot police?

There is a patchwork of international law and regulation which covers weapons used in civil unrest. While there is a general understanding that police agencies are permitted to use lethal force if necessary to protect themselves and preserve public order, explosive weapons are generally seen as vastly excessive for their purposes.

Yet there is not a specific contravention against their use – only an informal sense that countries using such weapons on protesters would be subject to international opprobrium.

Chemical agents for riot control are covered by the Chemical Weapons Convention, but only if they are used in the course of military operations. Given the near-universal reach of the CWC, this could theoretically serve as a check on the use of such weapons on peaceful protest.

But the exception for police use of such weapons is broadly written enough, and riot control agents are used commonly enough, that there is unlikely to be sufficient political will for movement in that direction.

When it enters into force, the Arms Trade Treaty will control international sales of small arms and explosive weapons, but it has no provisions for riot control weapons. The EU regulates exports of weapons and equipment which could be used for internal repression, including chemical riot control agents and electric shock weaponry, and has in the past revoked export licenses for countries engaged in violent suppression of unrest.

But Venezuela and Ukraine are largely supplied with Russian- and Chinese-made military and police equipment, while Thailand operates with a mix of European, American and Chinese military equipment.  The US, Russia and China are the first, second and fifth-largest arms exporters in the world presently – and of the three, only the US has even signed the Arms Trade Treaty.

Certainly, the Arms Trade Treaty could be amended to include riot control weapons, using the EU Common Position on arms exports as a guideline. But doing so would not be sufficient.

Independently, the UN’s Basic Principles on the Use of Force and Firearms by Law Enforcement Officials should be reiterated and reinforced. Doing so would help international policymakers and law enforcement agencies understand where the line is between legitimate policing and violent repression and give them a reference point even in the midst of tense standoffs.

It is admittedly more difficult to convince states to sign up to binding restrictions on their domestic behaviour than implements which govern their foreign policies. But that should not prevent the world from trying.

The dramatic imagery from the past weeks in Thailand, Venezuela and Ukraine is testament to the dangers of civil unrest. But it is the potential for such violence to spin out of control and evolve into open warfare that underlines the urgency of international action.

This article has been updated to include reference to the UN’s Basic Principles on the Use of Force and Firearms by Law Enforcement Officials.