On 22 July 2011, Anders Behring Breivik took a boat to the small island of Utøya on a Norwegian lake not far from Oslo. Dressed as a police officer, he claimed to be checking on the safety of a Labour party youth camp after an explosion in downtown Oslo hours earlier. The campers did not know that Breivik was not a police officer, that he was responsible for the blast, or that he viewed them as traitors. When they gathered around, Breivik, armed with a Ruger Mini-14 semi-automatic rifle and a Glock 34 semi-automatic pistol, opened fire.

When Norwegian police finally arrived at the isolated island and arrested Breivik an hour later, he had killed 69 people and injured more than 100 more. Breivik’s act is generally considered the most lethal mass shooting carried out by a single perpetrator in modern history.

Those facts can all be found on the Wikipedia page which describes the attacks. But if a reader had started on the page for either of Breivik’s guns, the Ruger or the Glock, they would not know this. That reader would find a great deal of technical information about the weapons in question – their weights, lengths, cartridges, rates of fire, magazine capacities, muzzle velocities – and detailed descriptions of their designs, all illustrated with abundant photographs and diagrams. He or she would also be able to consult exhaustive lists of the police and military units which use the weapons. But there the available information ends.

This is not an oversight. The history of the Mini-14 page indicates that a reference to Breivik’s use of the weapon was at one point considered for the article, along with a reference to its use in a 1989 university shooting in Quebec. But it was mooted thanks to Wikipedia policy on articles about guns. 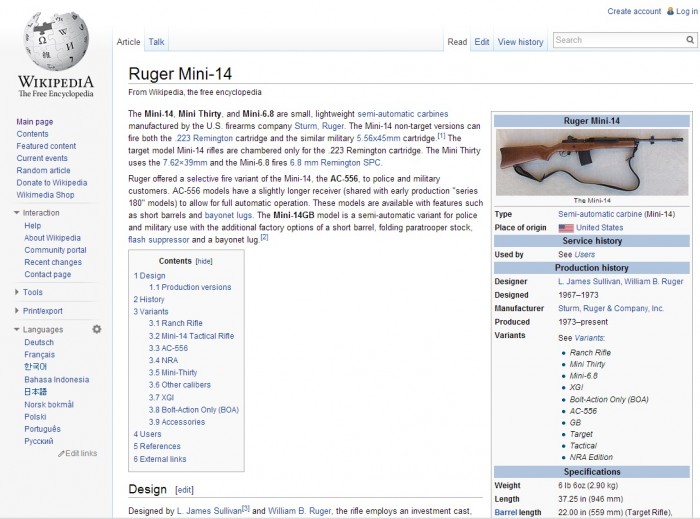 An online directory of all things

From its humble beginnings in 2001, Wikipedia has grown into one of the biggest resources on the Internet: Alexa, which tracks web traffic worldwide, ranks it 6th, behind only Google, Facebook, YouTube, Yahoo!, and Baidu. Wikipedia’s mandate is simple: to be a freely accessible source of information on every topic known to humanity – science, history, art, literature and many more.

Famously, Wikipedia does not have professional editors; rather, its millions of pages are created and updated by volunteers. The most prolific and reliable editors are awarded special privileges by the site, such as the ability to lock pages against malicious edits and make rulings in contentious or controversial cases.

Wikipedia’s specific policies adhere to a set of guidelines laid out by its parent organisation, the Wikimedia Foundation. Amongst these guidelines is the concept that Wikipedia articles must adhere to a “Neutral Point of View” (NPOV). The specific guidance is: “Editing from a neutral point of view (NPOV) means representing fairly, proportionately, and, as far as possible, without bias, all of the significant views that have been published by reliable sources on a topic.”

The exhortation to adhere to neutrality is, of course, an eminently reasonable expectation for the editors of what is effectively the world’s largest encyclopaedia.  But in execution it becomes complicated.  As a result, Wikipedia devolves responsibility for interpreting the broad policy directive to groups of editors interested in particular topics.

The germane section of the WikiProject: Firearms policy states:

“In order for a criminal use to be notable enough for inclusion in the article on the gun used, it must meet some criteria. For instance, legislation being passed as a result of the gun’s usage (ex. ban on mail-order of firearms after use of the Carcano in JFK’s assassination would qualify). Similarly, if its notoriety greatly increased (ex. the Intratec TEC-DC9 became infamous as a direct result of Columbine). As per WP:UNDUE, editors ‘should strive to treat each aspect with a weight appropriate to its significance to the subject’.”

The policy does allow for some flexibility. The article about the TEC-9, for example, does make extensive reference to the gun’s use by criminals and mass shooters (though not before mentioning its appearances on Miami Vice). And while the article about the Carcano rifle does not specify in its text that it was the weapon used to assassinate John F. Kennedy, it is book-ended by links to an article specifically about the Carcano that Lee Harvey Oswald used and its impact on American gun legislation. (On a related note, the Colt Cobra revolver used by Jack Ruby to kill Oswald merits a mention in a “Notable Users” subsection.)

But these seem to be the exception rather than the rule. The article for the Glock pistol ignores its use by Seung-Hui Cho, the Virginia Tech shooter; and by Jared Loughner, who shot Congresswoman Gabrielle Giffords and killed six others. The article on the Remington 870 shotgun does not mention its use in the Washington Navy Yard or Aurora massacres. The AR-15 article mentions the Port Arthur Massacre and Sandy Hook (briefly), but not the Beltway Sniper attacks or Aurora.

In response to queries from AOAV, a spokesperson for the Wikimedia Foundation declined to comment on the specific policy, saying only, “As with most policies, this one was develop[ed] by the  community, the discussion for which it was adapted is available in the talk page archives.”

The limits of neutrality

Wikipedia, like the Internet itself, is a fluid and evolving system generated by thousands of users making millions of decisions. Its task – to present as much information on as wide a range of topics as possible without bias or agenda – is a vastly complicated and worthy one.

To be fair, there is no type of weapon universally preferred by mass shooters (or any other group of criminals). And emphasising the use of specific weapons by mass shooters does not necessarily demonstrate larger trends. After all, the overwhelming majority of gun deaths in the US (for example) are not a result of mass shootings but of suicides, individual murders and accidents.

But while drawing a line under direct changes to legislation makes a certain logical sense, it also shackles articles about guns to a very specific, limited category of information. Providing only that information does reflect a point of view – that guns are merely tools, and that only their use by legitimate institutions is worthy of note. The article on the Remington 870, for example, has space to mention that the weapon is used by one particular unit of the police force of Luxembourg, but does not include any reference to its use in two of the deadliest mass shootings in recent American history.

But the armament of mass shooters is germane: the weapons they choose affect their choice of targets and the speed and efficiency with which they can carry out their massacres. The gun’s lack of moral agency cuts both ways; a particularly powerful weapon might help lawful authorities carry out their duties or it might dramatically widen the scope of a killer’s ambition.

A point of view is not merely expressed by language or choice of information; it can also be expressed implicitly by lack of information. A policy which deliberately excludes undeniably notable criminal use of specific weapons may be aiming for neutrality, but it is hitting something else.