Seven civilians were killed during shelling yesterday across the city of Fallujah. Their deaths are the latest to result from a “massive indiscriminate bombardment” carried out by Iraqi government forces and allied tribal groups since the start of 2014. As evidence emerges that the military has even resorted to the use of barrel bombs in its operations, AOAV urges the Iraqi government to stop the use of explosive weapons in populated areas and joins the growing calls for an increase in pressure on the regime to take greater measures to protect its own civilians.

Since the start of the year the Iraqi city of Fallujah in Anbar province has become a hotbed of explosive violence, calling to mind the wholesale destruction of the city ten years previously in battles between insurgents and US marines. Fallujah fell under the control of militants affiliated with the Islamic State of Iraq and the Levant (ISIL) in early 2014. The Iraqi army were quick to use air and artillery strikes in response, although from the outset stressed an intention to show restraint in not using these weapons to hit residential areas.

Most of the civilian casualties in Fallujah and the rest of Anbar province have come from shelling with mortars and artillery (86%). In the first four months of 2014, AOAV recorded 163 civilian deaths and 480 injuries from the use of these ground-launched munitions, predominately fired into residential neighbourhoods. These casualties are likely not the full story, as AOAV’s data comes from the analysis of English-language media sources. Still though the data shows clearly the impact of the government’s shelling of populated areas with heavy explosive weapons like large mortars.

When shelling attacks were carried out in populated areas in Fallujah, 95% of the resulting casualties were reported to be civilians. In attacks reported in other locations that percentage fell to just 10%. Mortars are used as indirect-fire weapons and can be launched without the crew being able to see the target. Moreover, they are generally capable of a rapid rate of fire, and are frequently fired in barrages, affecting a wide area.

Earlier this month Abu Hameed’s home was hit by an air strike carried out by Iraqi forces in the city of Fallujah. “It was something really extraordinary,” he reported. “The dust and the smoke. It looked like a nuclear bomb. We ran like hell.”

In recent weeks video and photo evidence has emerged that appear to show unexploded barrel bombs in Fallujah.

The Iraqi government has denied using barrel bombs, and stressed that the military has “clear instructions to avoid hitting the civilians.” Their claims ring hollow when compared to the testimony of Iraqi military and security personnel, with one unnamed officer saying “We are trying to copy what Bashar did in Aleppo, and Fallujah is the perfect place for it.”

AOAV has not recorded casualties from the use of barrel bombs in Iraq at the time of writing. It is unclear why the military would choose to resort to the use of barrel bombs. However, if these weapons are in use in the struggle for Fallujah then it is a deeply concerning sign of a rapid unravelling of restraint on behalf of the Iraqi armed forces.

Barrel bombs are nothing more than oil drums stuffed with fuel, explosive and chunks of jagged metal. They have been widely used in Syria, where they have had a devastating impact on civilians. AOAV’s data from Syria shows that on average barrel bombs are causing 30 civilian deaths and injuries whenever used. They appear designed to mimic the impact of massive aircraft bombs. Not only are they unguided weapons but they are incapable of being guided during its fall to earth. They also have wide blast effects and can cause great damage and destruction. Regardless of the motivation, there is no justification for any government to use such weapons in populated areas.

Militants in Anbar have been using improvised explosive devices (IEDs) in the ongoing fighting, laying down roadside bombs and carrying out suicide attacks. These IED attacks have also resulted in some civilian casualties, but in the context of fighting for Fallujah they are a smaller relative threat to civilians than mortar fire. In twelve IED attacks since the start of 2014 in Anbar, AOAV has recorded 172 casualties, 16% of which were civilians.

Beyond Anbar however, it’s worth noting that IEDs have been the biggest civilian killer in Iraq for years. In 2013, IEDs caused almost 13,000 civilian deaths and injuries in the country. The trend has continued into this year: the shelling in Anbar has been responsible for a quarter of civilian casualties from explosive violence in Iraq between January and April 2014.

For years, the civilians of Iraq had to endure the daily threat of IEDS ripping apart cafes and markets without warning. Now they face the added threat of shelling and air strikes at the hands of their own government. 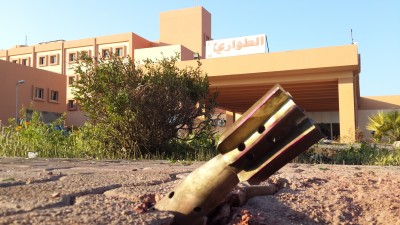 Caught in the crossfire: Hospitals and humanitarians in the firing line

The Iraqi government has issued repeated statements asserting their intention to show restraint in the use of explosive force. These have been echoed in recent weeks, but sound increasingly like meaningless vows in the face of growing evidence of a “reckless disregard for civilians.”

One anonymous Iraqi officer recently attempted to justify the government’s policy of shelling populated areas by saying “It’s the scorched-earth policy– the destruction of a whole area. The army is less experienced in house-to-house fighting, which the rebels have mastered. That’s why they’ve resorted to this.”

The rising civilian casualty toll is testament to the inevitable failure of this strategy to achieve what is surely its primary objective: the protection of Iraqi civilians. The area effect of explosive weapons makes them fundamentally unsuitable for use in populated areas and leads to huge civilian suffering, not only in the direct and immediate casualties caused.

As highlighted by Dutch charity Pax, the use of heavy explosive weapons in Fallujah “has led to the huge scale destruction of infrastructure, buildings, schools, mosques and drinking water facilities.”

The bombing of Fallujah has forced civilians to flee the city en masse, with latest UN estimates suggesting that 427,000 people have been displaced. At least 80% of the city’s population have been forced from Fallujah in the last four months of shelling and air strikes.

Humanitarian operations are being held up, obstructed and limited by heavy clashes and random shelling. Even the Fallujah General hospital hasn’t escaped the mortar fire, and latest developments suggest that medical staff is now joining the mass exodus from Fallujah. “The army continues to fire mortars and rockets at the hospital, prompting many medics to leave,” said the spokesman for Fallujah General Hospital, Wessam al-Essawi. “Only three doctors and a few nurses decided to stay behind to help the wounded civilians.” Al-Essawi called on the Iraqi Health Ministry to intervene to stop “indiscriminate attacks on medical facilities and the homes of innocent citizens in Fallujah.”

Iraqi government forces must stop the shelling of populated areas in Fallujah. This is a pattern of violence that is killing and injuring the city’s residents and destroying vital civilian infrastructure. Iraq’s international allies must put greater pressure on the government to show greater restraint in its use of force. The United States, which has backed the government to the tune of billions of dollars in arms transfers, must reconsider its support if the state forces continue to use explosive weapons in populated areas of Iraq. Iraq’s allies cannot stand by and ignore the attacks taking place in Fallujah. As the staggeringly high casualty toll from IEDs in the country show, civilians face a grave threat from militants in the country, but the government’s approach is recklessly adding to the burden civilian bear from explosive violence.

AOAV is a founding member of the International Network on Explosive Weapons (INEW), and calls for urgent action to limit the harm from explosive weapons in populated areas. To find out more about AOAV’s work on explosive weapons see: