The gunman entered Albertville secondary school shortly after 9.30am. Wielding a 9mm Beretta semi-automatic pistol, he opened fire in three classrooms, killing nine students and three teachers. Seven wounded students were hospitalised. Several police officers entered the school two minutes after receiving an emergency call at 9.33am. They caught a glimpse of the shooter, who fired at them and escaped.


The gunman managed to leave the school and flee the grounds, shooting and killing a gardener of a nearby psychiatric clinic. He then hijacked a car and forced its driver to take him to the town of Wendlingen, some 40 kilometers away. In Wendlingen, he walked into a car dealership and demanded a vehicle. The gunman shot repeatedly at police as they approached the building. Caught in the crossfire, a sales representative and a customer in the dealership suffered fatal injuries. At 12.15, almost three hours after it began, the shooter ended his killing spree by shooting himself after the police wounded him. In total, the shooter fired 112 shots, 60 of them at the school. He was found with around 110 rounds of unused ammunition.


The gunman took the weapon and ammunition from his father’s collection of firearms. The teenager’s father was a member at the local gun club and had a small arsenal of weapons; he legally owned 15 licensed guns. All of the weapons were locked in a cabinet at home except for the gun used at the commission of the shooting. That gun was hidden unsecured in his parents’ bedroom along with hundreds of rounds of ammunition. 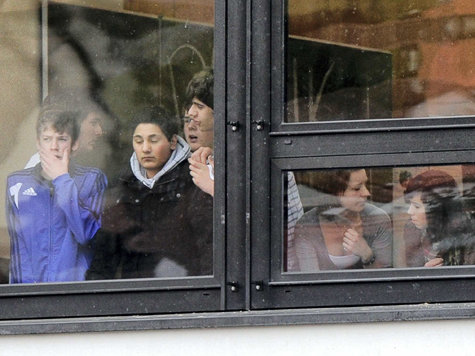 In 2002, the Weapons Act increased the age requirement for possession of firearms to 18 for licensed hunters and competition shooters.[1] It also introduced the requirement of a psychological evaluation for persons under the age 25 to fulfill the requirement for the acquisition and ownership of large-bore firearms.[2]

The 2008 amendment was intended to implement the 2005 UN Firearms Protocol and UN Instrument on the identification and tracing of small arms and light weapons into domestic law. It was also a reaction to the 2002 shooting in Emsdetten. The 2008 reform banned certain kinds of weapons. It introduced a ban on fake weapons (replica firearms), and prohibited striking, slashing and thrusting weapons and knives with blades longer than 12 cm from public places. Furthermore, it introduced a ban on electro-impulse devices that can be used from a distance (eg. Tasers).[3] Further, in accordance with the UN documents, the Act required additional marking requirements for firearms. To this end, anyone who manufactured or transferred guns on a commercial basis was obliged to clearly and permanently mark one essential component of the weapon, such as the designation of the ammunition, serial number or the country of manufacture.[4]

The shooting revived arguments about gun ownership in Germany, where gun laws were tightened after a massacre in Erfurt. The gunman’s father was charged with and initially convicted of involuntarily manslaughter for the failure to lock up the gun, but the decision was reversed on appeal because of procedural errors. However, the main focus was on measures tightening gun restrictions and regulating where privately owned weapons are stored.[5] Swift political action followed these calls for change, with the enactment of another reform to the Weapons Act which became effective on July 17, 2009. The latest reform led to two essential amendments:  a national weapons register and intensified government monitoring of gun storage.

The amending Directive 2008/51/EC of the European Parliament and of the Council of 21 May 2008 called for the creation of a computerised data-filing information system for firearms through a National Weapons Register by 2014. After the shooting, the German government decided to accelerate the requirement of the catalogue domestically two years prior to the deadline.


In compliance with member states’ obligations under the binding directive, the 2009 amendment to the Weapons Act provided for a national weapons register, which was scheduled to commence operations by January 1, 2013, recording information and licenses on buyers, owners and former owners of guns.[6]

In addition, the 2009 amendment amplified government surveillance of private gun storage. Pursuant to the amendment, gun owners must provide the authorities proof of measures taken or planned to ensure secure storage of their firearms. Owners of firearms, ammunition or banned weapons requiring a licenses must grant access to the places in which weapons and ammunition are stored in order to monitor whether the compliance with proper safe-storage procedure are being observed. Authorities are authorised to enter private premises against the owner’s will to prevent an urgent threat to public security. In this sense, the basic right to inviolability of the home (Article 13 of the Basic Law) is limited.[8]