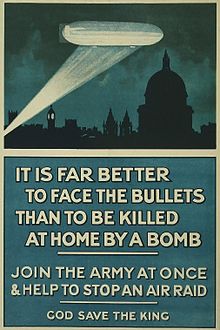 Significance: The first time aerial bombardment was used on a larger scale during conflict, targeting civilians in their home cities.

Where: The UK, principally London

Impact: 51 Zeppelin air raids took place in WWI. 5,806 bombs were dropped, causing 557 deaths and 1,358 injures. The biggest damage was psychological, as the zeppelins caused terror within the civilian population.

Aerial bombardment was not something many people thought was a realistic possibility at the start of the First World War. Planes themselves had only been invented ten years before, and had principally been used for luxury, not to inflict harm. The means and methods of defence from aerial attack were extremely limited.

The first Zeppelin attacks were launched in 1915, with the first strike hitting London on 31 May. The first air raid, which struck Stoke Newington, Hackney and Stratford, killed seven people and injured 35. The initial interest in Zeppelins turned to anger and fear as Londoners were, for the first time, exposed to death from the skies. The Zeppelin raids happened at night, and caused terror within the local population. The means and methods of attack were not sophisticated; incendiary bombs and grenades were simply dropped from the Zeppelin over London. Targeting was almost impossible, both due to the height the Zeppelins flew at, and their lack of targeting technology.

Initially the Zeppelins attacked with almost complete impunity. They could fly higher than the planes defending the UK, and were not damaged to any great extent by bullets. It took two years for the British to work out how to shoot them down. In order to damage the Zeppelin to an extent which would make it inoperable, two bullets had to be used: one which exploded, the other which was incendiary, thus setting fire to the airship. Once this method had been discovered, Zeppelins were extremely vulnerable, and they were replaced by the Gotha IV bombers in 1917. The final Zeppelin attack was on 19 October 1917, where 33 people were killed.

The Gotha IV bombers were more deadly than the Zeppelins, and were used to carry out daylight raids. The first daylight raid was also the deadliest raid on Britain during the First World War. A Gotha IV bomber dropped a number of bombs, hitting locations including a primary school. This raid resulted in the death of 162 people, including 18 children, and injured a further 432.

The use of Zeppelins, and subsequently Gotha IV bombers, during the First World War hailed a new era of warfare. For the first time air attacks were used to target the civilian population at home, bringing the war into towns and cities far away from the front lines. The traditional distinction between civilians and combatants was ignored, something which has consistently been seen in more recent conflicts.

The development of the means and methods of warfare during WWI was extremely fast, especially where aerial attacks were concerned. At the beginning of the conflict there was little thought that bombs could fall from the sky. Within a year of the conflict, Zeppelins were being used on a semi-regular basis to attack cities, but such form of attack was rudimental at best. By the end of the war, aeroplanes proper were being used to attack cities. Defence mechanisms developed greatly due to the developments in aerial technology. “The Zeppelin bombings were the beginning of modern warfare.”

If you found this article of interest you might want to read this report on the bombing of Germany in WWII.