A bloody weekend in the northern Nigerian city of Maiduguri is the latest evidence of a severe escalation in explosive violence.

On Saturday, rocket propelled grenades (RPGs) and a suicide bombing killed at least 30 people in the city, and on Sunday a bombing injured a further four. The attacks came only days after Nigeria’s new President Muhammadu Buhari announced that the military would be moving their headquarters to Maiduguri in their fight against the militant group Boko Haram. Although Boko Haram, an ISIS-affiliate, have not claimed responsibility for the latest attacks, they are widely thought to be responsible for much if not all of the deadly surge in IED use in Nigeria since 2011. 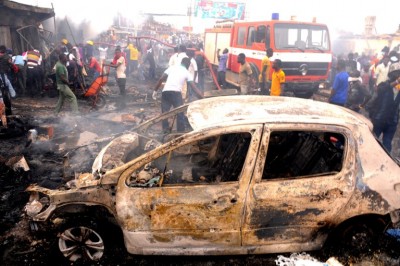 Firefighters and rescuers extinguish a fire at the scene of a bomb blast at Terminus market in the central city of Jos on May 20, 2014.

The attacks this weekend certainly bear all the hallmarks of recent violence in Nigeria. The bombings all took place in populated areas, among civilian crowds. The bombing on Sunday, in which four people were injured, occurred when a bomb hidden under bags of charcoal exploded. The worst attack on Saturday occurred when a suicide bomber detonated explosives outside a mosque, killing 16 people. Mosques are often the targets of attacks in Nigeria.

According to AOAV data, from January to March 2015, 733 civilians were killed and injured in explosive weapon attacks. Of these, 269 were in Maiduguri, the birthplace of Boko Haram.

Those in Maiduguri have been increasingly impacted by attacks. On Saturday 7 March, four bombings, all perpetrated by suicide bombers, killed at least 54 people in the city. A further 143 were injured in the attacks which struck two markets, a shopping area and a bus station.

Markets and transport related infrastructure were the most impacted in the first three months of 2015, with 199 and 136 civilian casualties occurring respectively in those locations. Suicide attacks continue to plague Nigeria, and of the 27 explosive weapon incidents recorded by AOAV to the end of March, 21 were carried out by suicide bombers. An average of 32 civilians were killed and injured in each suicide attack.

The rise of suicide bombing as a tactic of IED use in Nigeria is one which causing some of the most destructive and deadly attacks recorded by AOAV. Attacks which deliberately target civilians, or are indiscriminate in their nature, are illegal under international humanitarian law. AOAV calls on states to do all in their power to undermine and restrict the availability of IED materials to prevent such future attacks, and urges all users of explosive weapons, including IEDs, to stop the use of such weapons in populated areas.